Continued from here.
Crossroads offered exits to west, north west and north east.
Oolong decided to take western tunnel first. She found herself inside the small shrine. Who knows to what gods this shrine was initially devoted. Now, it was a place to worship dark purposes of Red Tide. Oolong used her knife to destroy Red Tide symbols in the shrine. Act that made no difference, since it looks like all the cultist that once visited the place turned into spawns long ago. But Oolong, following her natural Shou hatred for Red Tide felt good doing this, and maybe it will bring her some good karma in the future.

Next room used to be the library, but it was affected by fire some time ago. Nothing useful could be found here. Oolong offered the point of karma earned in shrine to all goods possible, just to be sure that Book of Teas was not kept in this library...

Moving further north west, Oolong entered a cavern that caved, so that only a small part of it was available. Cave had no visible exits other the one our hero came in, so she turned to leave, when light beam from her lantern reflected on something.
She picked up the strange object resembling a man sized walking stick.  The strange symbol was carved at its top. Oolong recognized the symbol as a potent sign against evil, so she took the staff.
(I stumbled upon the feature. It was "something stolen by the inhabitants of the dungeon". Is it The Book of Teas? No. It is something leading to "reconsideration of dungeon's real nature". Ask Rory's Story Cubes: Gift + Travel. So traveler's friend, or walking stick!
Wisdom test - hard + scholar trait (1), successful -  it is a Wizard's staff. Once a day it can cast - RSC: Push + Monster - The Sovereign Sign Against Evil as if it's owner is a level 1 magic user with prepared spell) 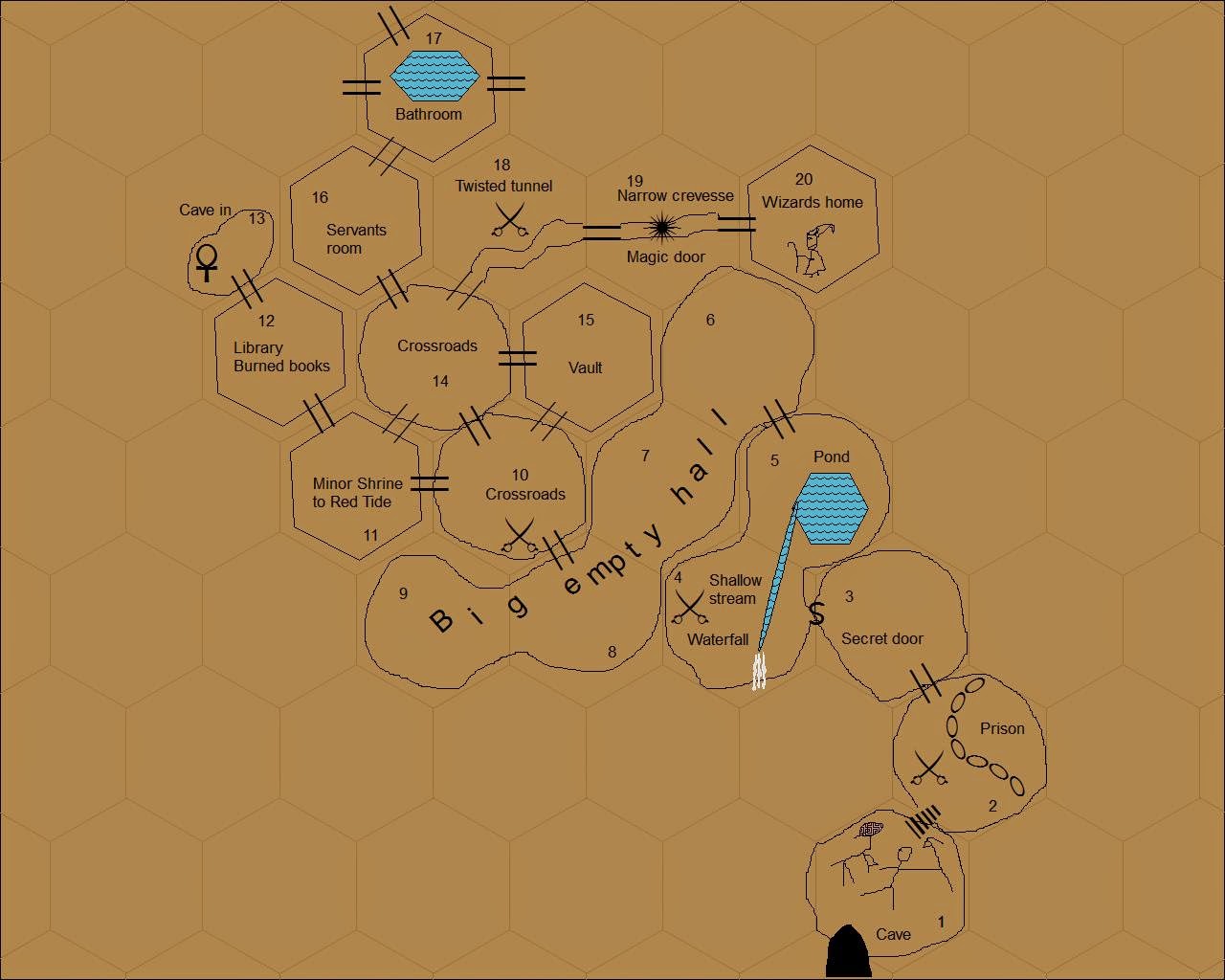 Oolong backtracked to the unholy shrine, and moved north east. There was another crossroads, but this one was empty. Moving further east, she entered a room that once served as vault, but looked like it was already plundered. Detailed search reviled just 1 gp and one peace of cheap jewelry, probably something nobody else wanted.
Oolong returned to the crossroads (room 14) and continued north west first into the empty Servant's room and than into the empty bathroom. Bathroom had 4 exits in total, so our hero decided to return to previous crossroads to check the last remaining tunnel before going further north.
(She is again in room 14. Test showed no encounter with wondering monsters).
The corridor she took stretched forward as twisted tunnel. Oolong could feel some movement in the tunnel ahead, so she held her sword at ready. Than a ghoul and a hungry ghost leaped at her from around the corner falling straight to her short sword.
(In total, there are 3 ghouls and 1 ghost, but fight is happening in the narrow tunnel so Oolong will again face only 2 enemies at the time. In round 1 I rolled great, making 4 points of damage, but there were only 3 HD to distribute it. Sometimes this rule works against the hero).
Before she could take her sword out of dead enemies, two more ghouls were upon her. She felt the chill of the death as one of them scratched her skin with its claw.
(Rolling in round 2 was terrible. Oolong missed her attack, and managed to do just 1HD damage with fray die. Two ghouls rolled 6 attacks, but only one hit my hero, for 1 point of damage. She managed to save from ghoul paralyses rolling modified 13, just the number it was needed.)
Than, Oolong got herself together and dispatched both remaining undead with one powerful blow.
(Attack hit for two points, fray die for one, just enough. Phew.)
Oolong bandaged her wound, and moved on, stepping into narrow crevasse. Suddenly, magically written letters appeared in front of her: "State your name and business!" "I am Oolong, looking for the Book of Teas" she replied. "You may continue" stated the sign and than it disappeared, opening the way in front of her. (This was another feature).
A man with a beard and a funny hat waited for Oolong at the exit from crevasse. "Welcome", said he, "I am Darjeeling, a wizard. I see that you found my staff. Well, keep it, it will be more useful to you than it was to me. Welcome to my humble home. And before you ask, yes, I am the one responsible for the strange behavior of the nature outside. I might even tell you about it some day" (and that will be occasion to test Bold waylays again :) )

Does he have the Book of Teas? NO. Does hi know where can it be found? YES. In Room 49, once I reach that far :)
Does he have any task for Oolong? YES. What? RSC: Strange + Insect.

"Once you find the Book of Teas, maybe you can do me a small favor. I need one special insect brought to me, so that I can perform some experiments. If you do that I will gladly award you by teaching you to perform some basic magic" said Darjeeling.
"Is the creature alive?"
"It is now, but it does not have to be when you bring it in here, if you know what I mean", replied wizard.
"Can you tell me more about it?" - charisma test hard, successful. For description of the creature 4RSC: House, Forest, Flashlight, Eye.
"Well, it is a big and mean nocturnal creature. It resides in the magical forest outside my lair. You can attract it by light." (It will be 4HD insect, Armor 3, attacks 2 stings + 2, 2 bites +2, damage D6 each. No poison, phew at least something good. Move 40', flying. Morale 12).

For meeting with wizard, Oolong earned another XP.

Continue to part 4
Posted by Aleksandar Šaranac at 12:30 PM