Upon entering into the Dungeons of Red Tea Tide, Oolong found herself surrounded by complete darkens. She lit her lantern, and started exploring the dungeon entry chamber. It was a cave that prehistoric people used as a settlement, which she could detect by a crude drawings on the wall, representing a hunt scene.
The cave was otherwise empty. Lone staircase leading deeper into the depths of the earth seemed to be the only other exit.
Oolong carefully descended.
The next cave was in the dark, but she could sense some movement ahead.
Slowly entering into the next chamber she could see that cave was divided into two by steal bars, and that one  half of it was used as a prison cell. 11 villagers were locked in the prison.

5 Hungry Ghosts were guarding prisoners. They were so concentrated on the villagers behind bars, that they didn't notice Oolong although she entered the chamber openly. So, the hero grabbed the opportunity and charged Ghosts with her short sword, finding them totally unprepared for the attack (surprise attack rules). Some of the villagers were later telling that she disintegrated all ghosts with one powerful stroke of her short sword. Considering the dark in the cave, no one can be sure what really happened...

Than Oolong opened prison bars and released the villagers, telling them to be careful of the enchanted forest outside.
Departed ghost left some small treasure for their slayer - 19gp and some cheap jewelry.
There was only one corridor leading out of the prison, and it took Oolong to the cave with no other visible exits.  There she found another 60gp in the secret pocket on the wall. Searching further, she found a mechanism that opened a secret door leading further into the darkness (successful wisdom test with help from her dungeon explorer trait) .

When she enters the next room, Oolong could hear a sound of running water. A small waterfall give birth to the shallow underground spring. But she had no time to marvel underground beauty, since two Stretched Ones and one Creeper were rushing towards her. Her sword was ready and she jumped in the direction of  the bigger deformed creatures, killing them both with one stroke. But the small Red Tide spawn evaded her sword and scared her forearm. Oolong turned around and stabbed her sword deep into the spawn's body.
(In round 1, Oolong was first. Attack aimed at Stretched Ones hit and made 2 HD damage, killing them both. But the fray die rolled 1, so the Creeper was missed. Creeper attack resulted in hit, making 2 points of damage, and leaving hero in dangerous situation with just 1 point left. Luckily, in round 2, fray die was enough to eliminate the creature).

Oolong bandaged her wound and moved on, following the stream. Soon it ended with underground pool. Apart from running water and her own breathing, Oolong could hear no other sound.
Cave with pool connected to other, bigger hall, that was also completely empty. Looking around, Oolong detected only couple of coins on the ground so she picked them up for luck. 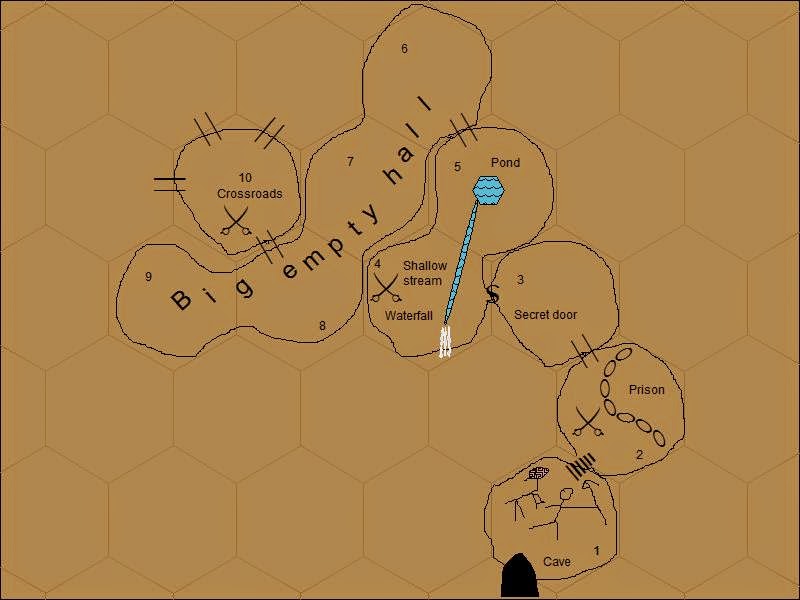 The only visible exit from the big hall was a corridor leading north west. Oolong followed it carefully, until it reached crossroads.
Crossroads were guarded by one Red Tide Abomination (4HD) one Red Tide Warrior (1HD) and two Red Tide Drones (1HD).
(Here I got custom monsters. I rolled 1 boss, 1 elite and 2 minions. Lucky for Oolong, no special features  were rolled on the monsters)
Oolong prepared her bow, peaking from the corridor. Her well aimed arrow pierced through the warrior and into abominations body. Than, Oolong retreated back to the corridor.
(No surprise attack, since she came forth with the light. So Oolong went first, attacked Abomination, and hit for 2 HD. Fray die was aimed at elite, and hit, killing it. For the enemy action in first round I rolled "do nothing" so Oolong retreated to the corridor, where she will face two enemies at the time, due to the limited space. Enemies will enter corridor in order of initiative)
Two drones rushed into the corridor. Oolong killed one with fray die, but missed second and it hit our hero for one point of damage. That open a space for Abomination to approach in the next round. Luckily, heroes always have initiative, so Oolong was able to attack. Fray die eliminated last minion, and her attack hit Abomination for 2HD, killing it.

For killing Red Tide Abomination Oolong deserved another XP, and that makes her a level 2 rogue.
Her health points are updated to 6, and she gets two trait points. One is distributed into Resist Red Tide (3), she will need it. To remember her encounter with the cave doors, second one is dedicated to Resist poison (1) trait.