This month, I got me a new board game and a new SF rulebook.

The game is Carnival Zombie. The best way to describe it is a Castle Panic version for big kids.
I played a couple of games and I have to say that I really like it, although the complete campaign lasts too long to be played on one go.
In the future I think I will be playing just one night battle at the time. 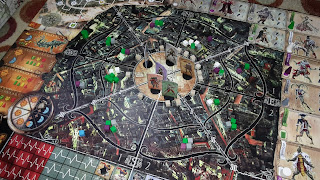 I also purchased wargame PMC2640 by Polish publisher Assault Publishing. This is a SF game played at company level.
The reason for acquiring the book was the claim by the author that it has fully developed solo rules.
After just reading the rules, I am not 100% happy with what I see. Book keeping system is a bit complicated, players will need several different counters, it will be hard to use them in 6mm on 1 foot board.
Solo system is design to fight "mindless" opponents - bugs or rebel militia. Enemy will act more or less random, situation on the table is not used into consideration.
But I will have to try to play it to give my final decision.

Finally, one thing unconnected with gaming.
I was recently introduced to the book Stories of your life by Ted Chaing. I have to say that it is the best SF book I have read in last couple of years. Last night I stayed awake until 2am just to finish one story, and that didn't happened to me in some time. Highly recommended.


Posted by Aleksandar Šaranac at 9:50 AM 3 comments:

Dungeon of light and darkness

This year, I will try my game designing skills with the game called Dungeon of light and darkness.

It is a push your luck tile and dice placement dungeon crawl game.

Somewhere among the tunnels of Dungeon of Light and Darkness, lies famous Fountain of knowledge. Many have tried to find it, but none succeed. And no, there are no monsters in this dungeon.. But the light goes on and off in its chambers in mysterious ways, and this is enough to drive explorers crazy and forever lost. Can you become the first man in centuries to drink from the long lost fountain?

Here are images of some game components in full color and in ink saving black and white version. 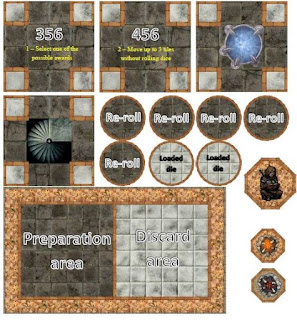 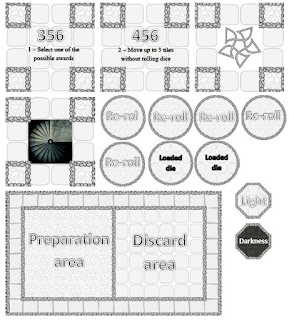 Game files can be downloaded from contest WIP thread, or directly from here:

First draft of the rules:
https://drive.google.com/file/d/0B_68vh2U4DoKMmVRM1oyZGU2ckk/view?usp=sharing

Posted by Aleksandar Šaranac at 9:27 AM No comments: