Song of stars and void - playtest

Recently, I was lucky to become one of the players Andrea from Ganesha Games sent for playtesting a copy of his new space combat rules called Song of Stars and Void.
I played one game solo, playing both sides, just to get in touch with the rules, before I find a playtesting buddy for this new toy :) 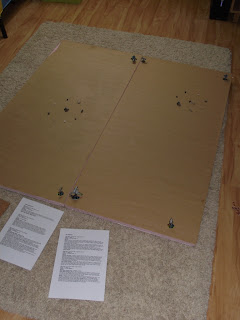 I played a 450 points game, with pregenerated ships, Commonwealth against the Shaggeroths, 2 escorts and 1 Capital ship per side. 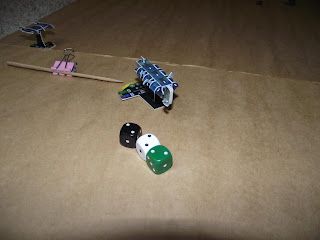 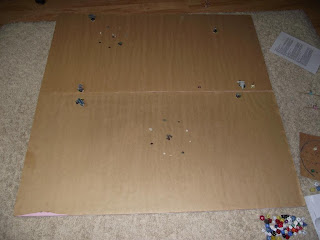 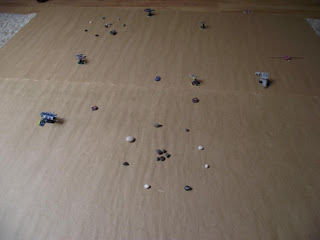 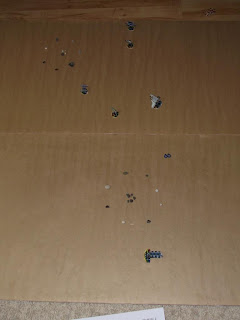 but Achievement uses manouver around asterid field to get rid of them... 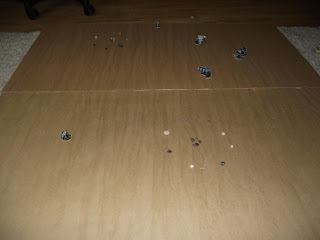 Later in the game, heavily damaged Frigate CF Ettrick leaves the battlefield. CF Vanguard, gets the lucky shot from behind at Cooperation Destroyer, blowing it out of the skies...

The game runs very smooth, but it needs some learning curve, befopre a player will be able to use the ships to the best of their posibilities...

I had so many wrong tactical  decisions on both sides this time arround, that I decided to quit the game here, and start tomorrow from beginning....
Posted by Aleksandar Šaranac at 10:57 PM No comments:


For some time I wanted to test a new dungeon exploring rules from Warrior Heroes Legends by 2HW. Finally, I managed to play with it a little.

All PEFs are preloaded, it will be some pesky dwarves, with very small chance to encounter goblins, which might turn to be friendly, neutral or enemies.

The dungeons started with the almost direct descend to level 3. Rattus noticed something with the end of his eye, but he could not tell if his mind is playing tricks or him or not (encounter level raised from 3 to 4). 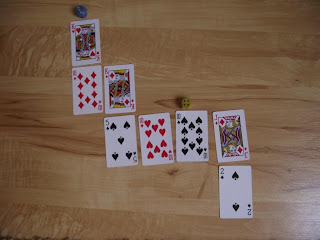 Another stairs down, and my heroes finally bumped to some dwarfs four stores underground.
It turned to be group of two missile armed dwarfs and one soldier. 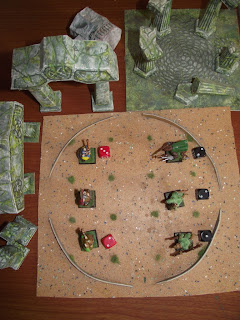 In Sight test was taken.


I have to admit I had to cheat here. At first, I sent my fanatics charging into soldier, but with AC6 and shield he easily took them down both.
So I decided to start this combat again, from the beginning.

Dwarfs with guns are shooting first. Rattus was hit, but his luck of a rat (or Star power to be precise) saved him from harm. Other shooter missed.
One fanatic charged lower missile dwarf, and scored snake aye for damage! Dwarf is Obviously Dead! Another monk charged upper rifledwarf, scoring OOF result. This was enough for warrior who failed his man down test and run away.

Next room contained a trap, probably set by running warrior. But rats are known for their speed, and my heroes had no problem to evade the dart.
Road was clear for some time, but then, in one room a ceiling collapsed. Probably another pathetic attempt the dwarf made to stop my heroes. Rats came out of it unharmed, but the way back was blocked.
Since I couldn’t remember what to do when the way back is blocked, and I was too lazy to look through the book, I decided that all stairs from now on will lead up, until level 1, where the dungeon will end with en exit.

The ground started rising immediately, leading my heroes directly to level 2! (3 face cards in a row!)


And there, on second level of the dungeon, 3 rats entered an ancient library build by dwarves. Rattus picked up few books with promising titles, hoping that inside some useful secrets of dwarf war machines could be found. Then, my heroes left the library through the opposite door.
Another trap waited for them there, but, being rats after all, they again managed to evade it easily. Then another stairs appeared, and above them Rattus could see the light of the day.


Heroes waited for the night, end only then Rattus decided to squeeze part of his muzzle outside. The library was too close to the surface, so this exit was probably surfacing somewhere in the middle of the dwarfs territory. And Rattus hated dwarfs; they are always a pain in rats back…
Next encounter will probably be a chase, with our heroes trying to escape the whole population of dwarf kingdom….