Far Away Land is a lighthearted D6 RPG with very interesting mechanics - you roll number of dices and keep only the best result. The game puts a lot on humor, and should be played that way, which I really like.
It is of course indie Kickstarter project and as such it suffers from some inconsistency, unexplained details and editorial mistakes, but it is nothing that can not  be solved by common sense. The Quick start rules are free, so you can test them. 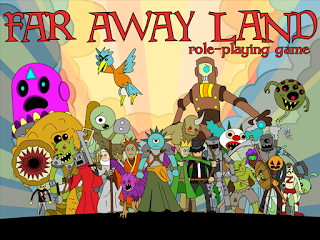 As one of my holiday animations, I decided to play a 9Qs adventure using these rules.

Let me introduce you to my hero - Booklet Fanzine, Let for short.
His stats are:
Brute 1, Dexterity 2 and Wits 3. He is a Bookworm (WIT 1) who is working as a handy man in the library, and there he learned to Manipulate (WIT 1) both objects and people, and to Evade (DEX 1) unwanted customers and librarians. His main flaw is Curiosity (that often kills the cat).

To start the adventure, I used Aladdin technique.
After all modifications, the main thread is: Let is following a story from the Book of Lore looking for the human settlement where Dream (was book, but it got altered by Rory's cube of sleeping face) of Wound Healing (added by Rory's cube of crossed bandages) knowledge is hidden. But (scissors cutting paper + teleport) someone or something wants this travel to end early.

Q1: Safe-box, pointer, house.
Booklet spent his youth working in Londol libraries as handy man. So, from time to time he was able to steal some old tome from dusty shelves and read it - for reading was his hidden passion. His latest catch was called Book of Lore, tome containing mostly useless knowledge from all around Far Away Land. (the book is not magical, but it contains lots of information. If I decide to search the book, I roll the die. If the result is 1 or 6, the book contains the required info. Then, I will roll the die again - on new roll of 1 or 6 the info is wrong. WIT test of 6+ is required for Booklet to know that the knowege in the book is not real).
After opening the book randomly before sleep, Booklet learned that somewhere in the world exists the human settlement that dreams the Dream of Wound Healing Knowledge. Reading about dreams made him sleepy, so he went to bed.
But when he awoke next morning, his house was strangely quiet. There was no familiar noise of Londol streets. And when he looked through the window, he could see nothing. Literary. He opened the door, and there was nothing outside. No city, no sky, no land, just nothing. Booklet was still in his house, but in the same time he was lost in the middle of nowhere in the way he could never imagine possible.

the Nothingness
Booklet checked the Book of Lore, and found the entry about nothingness (there is a knowledge, but wrong one. Booklet failed the wits check, so he will follow instructions from the book. Instructions are - siren light, space suit). In there was a picture of the astronaut, wearing some strange round helmet and carrying a torchlight. Let decided to follow the picture. He equipped himself with torchlight and started looking around the house for a helmet. He noticed the empty aquarium. Long time ago, it contained a fish called Wanda, but since Booklet regularly forgot to feed it, one day fish just moved away from his house, leaving behind rather angry Dear John letter.
Let put the aquarium on his head and was satisfied with it, since he almost looked like the astronaut in the book.
Booklet also took big kitchen knife that could double as a short sword, some food he had left in his house, and then he stepped out into nothingness.
He walked and walked, until he was completely lost. He was unable to find his house again (or anything else, actually).

I have just returned from 2 weeks family holiday. 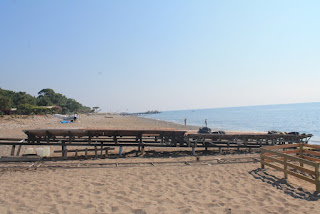 I had limited access to internet on the beach, but I took with me some books and dice, and I had more time than usual to play some solo RPGs.

Therefore, you can soon expect report from the 5th edition D&D dungeon crawl and a story driven 9Qs adventure of Far away land RPG.

I also spent lots of time thinking how to re-write some SF rules I'm working on, according to the editorial comments I received before holiday - and this also needs to be put into PC.

All in all, lots of gaming related writing awaiting....

But first I have to catch up with issues waiting for me in the office, and I will have to tackle one gaming issue at the time.

So, stay tuned, I hope to have some new updates soon....
Posted by Aleksandar Šaranac at 2:42 PM No comments:

The printed versions of PDFs I have started slowly to take too many book shelves in my house, so I decided to try and change the format.

End here is my new toy in all it's beauty:

End here it is by the copy of Far Away Land prepared to be taken for a test spin during my upcoming businesses trip... 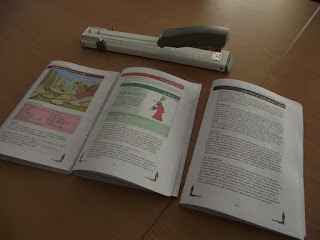 This heavy machinery can staple up to 40 pages, so Far Away land needed to be separated into 3 booklets - rules, bestiary and fluff.

Posted by Aleksandar Šaranac at 2:02 PM No comments:

I finished painting an army of 6mm SF orks from Black Tea tribe (as can be seen on battle flag).

All models are from GW Epic range, and all ale plastic with exception of metal Squiggoth.
As usually, all models are individually based on washers, to be able to connect with my magnetized board.

I will use them for Five Core and similar games. I am also working on my on vision of SF squad based game that uses D20 set mechanics, but more abut it when it gets into shape good enough to be presented.

Next on my painting board are coming GW space marines and Chaos mixed from GW and Onslaught miniatures.