Today, I entered a toy shop to purchase some Easter presents for kids, when on one shelf I noticed a small box entitled Star Wars Pocket Models CCG The Clone Wars Tactics Scavenger Pack. Box was priced at 4 euro, so I couldnt resist buying it.
I have to say the walue for the monety is great.
Even when I throw away cards, which are useles to me, inside I found 17 paper star ships, belonging to 9 different types, just what I need for the games like 5150 Star Navy by 2HW and similar. 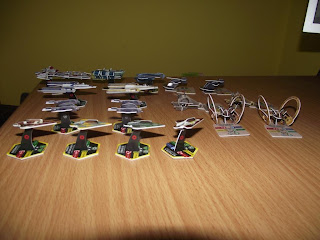 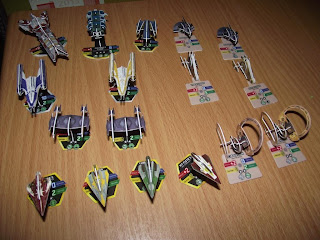 I am thinking about purschasing another box   :)
Posted by Aleksandar Šaranac at 6:44 PM 3 comments:

Q7. Where can the heroic motivation be most effectively redeemed?

Be the player first: Gerry wakes up on the edge of ravine. Inside, ritual is still ongoing (doubles here, by Mythic GME rules this is some kind of event: Inquire goals). As he stands up to leave the ravine, Gerry hears a voice asking: Where are you going?
Be the GM next - Carelessness intrigues. Gerry jumps when he hears the voice, but it turns out that this is only one of the flagellants also leaving the site of the ritual, and trying to catch a ride home.
Be the player once more: Not in your direction, replies Gerry and stumbles out of ravine.

Q8. Where does the final showdown takes place?

Be the GM first – deceive fame (enemy takes aggressive action against the heroes): coming out of ravine Gerry is arrested for inviting people to participate in event unauthorized by law, probably cult activity. He is arrested on the anonymous tip to the police, but there are several witnesses remembering Gerry inviting people to go to the ravine to reach better life (see Q1!)
Be the player next: Gerry contacts police PR trying to explain things. PR agrees to investigate issue.
Be the GM once more: On the next day, police examined area of the ravine but found no evidence about any strange activity happening there during the night. Therefore, due to lack of evidence Gerry is released from custody.

Q9 Where does the world stands after results of Q7 and Q8?

Be the GM - struggle possessions: and so, Gerry becomes regular suspect to the police, he will be watched from now on.
Monk is again in danger to lose position as cult leader. Will he be able to keep it , and if not who will replace him?
And what happened in the ravine? Which supernatural entity won the combat? Will there be some change coming to the world, or was it stopped by flagellant efforts?

Find out in next exiting episode of CRAZY STREET PREACHER, coming (relatively) soon to the blog near you….
Posted by Aleksandar Šaranac at 7:29 PM 3 comments:

In order to test new 9Q Special Edition I had to split characters. Since I have only 1 PC, I decidec to add a "part time" PC. It happened to be Monk Cult Leader.

Q4. How can the fight be brought to the enemy, gaining ground for the heroic motivation?

A) Gerry:
Be the player first: Gerry goes to ravine.
Be GM next – attainment a plot: There are people in ravine, lots of them. They are doing something, but Gerry cannot define what.
Be the player once more: Gerry tries to infiltrate among them.

B) Monk:
Be the player first: Monk goes to library to check if there is any earlier note about ravine in question.
Be GM next – oppress attention: Some mentions of ravine can be found in newspapers from past years, but it seems that someone took care to move public attention from each such accident to something else.
Be the player once more: Monk decides to convey to his spiritual sources.

Q5. How can any heroic gains from the results of Question 4 suddenly be undermined as new information about the true face/scheme/power of the enemy becomes known?

A) Gerry:
Be the GM first – arrive status quo (revelation, combat): People are talking around Gerry about some big change coming to the world. Seems that people in ravine are here to stop it! Then, one of the leaders in ravine begins to get suspicious about Gerry, and he approaches hem to see who he is and what is he doing here. The battle of wills occurs, but Gerry manages to sweet-talk his way past leader.
Be the payer next: Gerry continues to sniff around trying to learn the nature of the change and what actions are to be taken.
Be the GM once more – haggle suffering: Gerry notices that people in ravine are involved in rituals that practice self hurting and indulging in pain and discomfort.

B) Monk:
Be the GM first – communicate illness (betrayal, combat): Monk turns to his spiritual contacts, but the spirit that was usually obedient to him turns aggressive as possessed by some evil madness. Monk tries to fight the spirit but he cannot parry its mad strength.
Be the payer next: In terror, Monk tries to return from spirit world into reality, and barely makes it, closing in process all his channels to spiritual world. He will not be able to communicate with supernatural for long time!
Be the GM once more – inspect pleasures: Left without supernatural support, Monk starts to question himself if he succumbered to earthly pleasures and if he is really destined to lead the cult. He is not the only one to ask this question.
(This ends Monks excursion into PC world)

Q6. How can the adverse results from Questions 4 and 5 be further intensified, forcing the heroes to commit to a do-or-die course of action in accordance with the heroic motivation?

Be the GM first – communicate suffering (pursuit, intrigue): Flagellants from ravine approach Gerry and ask him to start performing acts of self-destruction in order to gain divine knowledge needed to stop incoming change.
Be the payer next: Gerry decides not to reveal his mask and joints a group of flagellants who are hurting themselves by being hanged by wrists on the tree branch and then spin with high speed. Gerry was able to withstand beating long enough to get part of the knowledge: what happens in the ravine is part of the war between two supernatural entities wanting different things. After that, Gerry lost consciousness.
Posted by Aleksandar Šaranac at 9:08 PM 2 comments:

This forth installment of  Crazy street preacher  campaign is played using 9Q  system by John Fiore. As usually, Mythic GME and UNE do the rest.

Q1. What action consistent with the heroic motivation do the heroes take that bring them into conflict with a looming hostility inherent within the setting?
Be the player first: Seeing no good in meetings of cult members and no action taken, Gerry starts street preaching again. Inspired by word seen on his initiation picture (see part III), he starts telling people that they have to pass through Ravine to reach better life.
Be GM next - trick power: A man on the street reacted to the word. While hiking through countryside a day before, in the ravine of nearby river he noticed some strange flying fires roaming around in the dusk.
Be the player once more: Gerry decides to go to the ravine the very same night. But to be on the safe side, he sends anonymous letter to Police PR (see part III) informing him about some strange cult activities on the site.

Q2. What overtly troubling event remotely tied to the results of Question 1 occurs, confirming that something seriously adverse to the heroic motivation is afoot?
Be the GM first – excitement rumor (intrigue): Buddhist monk also heard rumors about strange things near river, so he sent one cult member to investigate. He never came back. Monk contacts Gerry asking him to go there also.
Be the payer next: Gerry explains that he planned to go there anyway.
Be the GM once more: Monk is satisfied with this answer and goes on with cult business.

Q3. What elements of the results of Questions 1 and 2 suddenly get twisted in a surprising manner, increasing the danger to the heroic motivation?
Be the GM first – Refuse rumor (betrayal, revelation): Police PR receives letter from Gerry but refuses to believe in it and throws it away without giving it a second thought.
Gerry knows nothing about it, so he leaves for ravine believing in back up from two sides.
Posted by Aleksandar Šaranac at 2:40 PM 1 comment: