Song of drums and shakos is till my favorite Napoleonic skirmish game. And my Lone shako solo rules still performs perfectly as enemy AI.

In my last game, I decided to try to move some Polish troops over the river and through the ambush prepared by British rifles.

The gal of the polish side was to cross the northern river, then move across the bridge and rush into the village.
But early in the game, rifle fire took it's toil on several Vistula legion soldiers. 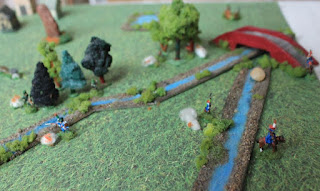 But when the brave voltigeur was killed, my squad fell below half of the starting value, morale start affecting them and they fled north of the river.
Victory for the British.
Posted by Aleksandar Šaranac at 12:38 PM 3 comments: