Back from vacation / New solo CCG in design

I have just returned from nice sea vacation in Turkey Antalya region.
Here is an monument left from ancient local tribe, found at local beach site by archeological expedition led by my 2 years old son. 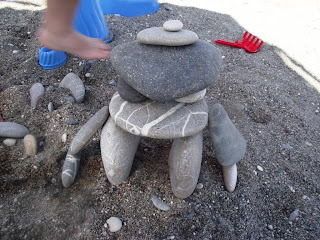 Arguably it represents a duck with the tall hat, most likely prehistorical representation of Scrooge McDuck :)

In other news, I started working on new solo collectable card game.
I believe that  I have found new approach to the solo CCG, since every player card will have 3 possible usages - as element attack, support attack or special characteristic card.
Combination of 2 cards will be needed to do damage to enemy, and at least one special card is expected to be played each turn, so the hand will go empty quick. Therefore, for successful play, player will have to think about dealing damage to enemy, draw as many cards from deck as possible and also return as many cards from discard pile into deck, for deck is also getting thinner with each turn, and once there is no more cards in it, it will be game over.
So far, I  made basic components and did some play test, and I am satisfied with the result. Cards are just colors and numbers at the moment.
My next goal is to decide about the theme of the game. It could be generic fantasy, but I think we are all a little bit bored of that.
So far, I think between Munchkin style humor or Superhero game, but I am not convinced what to do. Any suggestion will be appreciated.
Once I finish, I hope to offer this game to some small game making company, but if no one is interested, there is always 2013 Board Game Geek solo game making contest :)
If anyone wants to play test the game (or might be interested in publish it, of course :) ) contact me by commenting here, or by mail sharanac (at) yahoo.com
Posted by Aleksandar Šaranac at 9:09 PM No comments: