As you can see from the map, Oolong entered the more populated part of the dungeon. 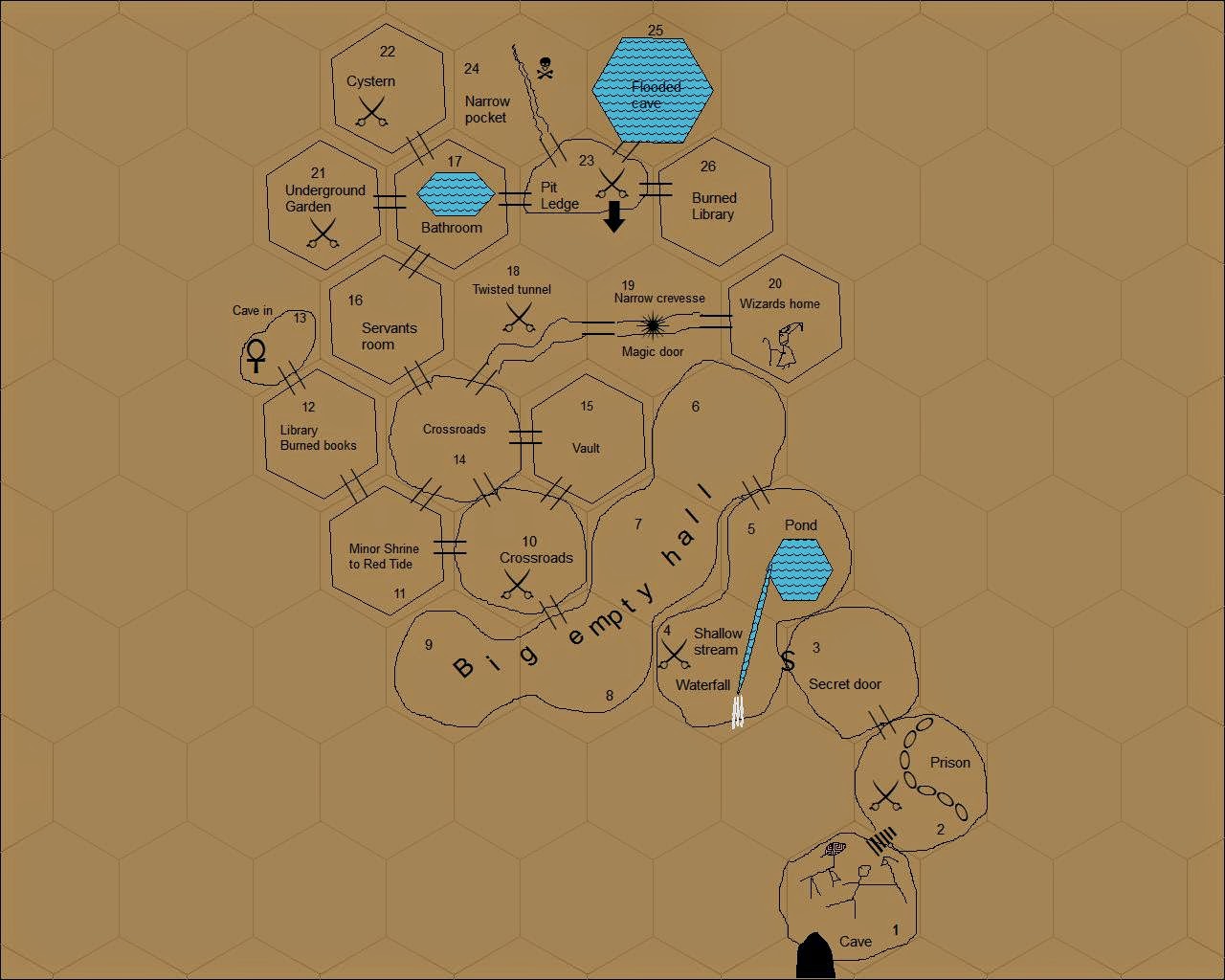 After leaving the Wizard, Oolong returned to the bathroom. Taking western doors from there, Oolong found herself within the underground garden. But she had no chance to marvel it's beauty, since she was immediately attacked by 3 twisted cultists with 2HD each. Oolong's first attack missed, with only the fray die doing one HD of damage. Cultists seem to be experience fighters and Oolong was hit for 3 points of damage. She decided to run away from garden, and in the process she was hit again, taking 2 more points of damage and barely keeping alive with 1 health remaining. She run all the way to wizard's lair (luckily no wandering monsters appeared), where she rested for a day and recovered to full strength.
Oolong decided to ask wizard if he can give her some healing potion. Well, he can sell here some, but here in the underground it is hard to find ingredients, so the price will be doubled - 2000 gp. Well, Oollong treasure is around 200 gp,  so no potions for her.
Recovered, our hero returned to the bathroom. No matter what wonders the garden has to offer, she is not going back in there for now. So, she took north west passage and found the cistern. Obviously, water from the cistern was filling baths, and than used water was directed towards plants in the garden. Surroundings of the cistern was populated by 4 dog sized chimeras, but our hero dispatched them easily. In their lair she found 20 gp and one peace of cheap jewelry.
Road east took Oolong to the pit ledge. There, she found 4HD necromancer and 2 zombies "enjoying some privacy" (I do not even want to think about implications of that encounter twist roll).
Combat round 1:
Oolong attacks zombies, to lower the treat. One hit with attack and one with fray die, so one zombie is down. Necromancer and remaining zombie hit our hero for 1 damage each.
Combat round 2:
Necromancer decides to cast a spell. Oolong tries to attack him in order to stop casting but misses. Fray die damages zombie for 1HD. Zombie misses, necromancer casts The River Reed Bridge, spell that allows him to walk over the vertical surfaces.
Combat round 3:
Oolong concentrates attack on the Necromancer, hitting him for 2 HD. Fray die misses. Zombie hits our hero for 1 damage. Necromancer starts running down the pit. He will disappear into the darkness bellow soon...
Combat round 3: Oolong tries to hit necromancer one more time but misses. Fray die kills second zombie, Necromancer runs away.
Oolong bandaged her wounds, and returned to 5 health out of 6 maximum.

Oolong thought for a while if she should immediately follow the necromancer down, but decided not to do it, uncertain what horrors may await for her there. So, she decided to investigate the current level of the dungeon first.
Passage to the east took her to another library, but this too was destroyed by fire. Passage North east led down into the flooded cavern, so another dead end. To the north west, there was a narrow pocket in the wall. Ooloong thought she saw something glitter inside, but once she entered the pocket it turns out that it was just a reflection from her lantern upon the wet wall. But our hero realized that she is stacked between the rocks. She needed to make successful save or be trapped, but since this is dexterity chalange, she managed to pull herself back easily.
With nothing more to explore on this level (except for the garden, but she will not be going there again yet), Oolong returned to wizard's home to recover to full strength before descending into darkness of the deeper underground, on the necromancer's trail...

Continue here.
Posted by Aleksandar Šaranac at 11:37 AM