No battreps for a while

I took a few days off from gaming, in order to paint and sculpture some miniatures . I started with my new Skaven army, so here are the first results: 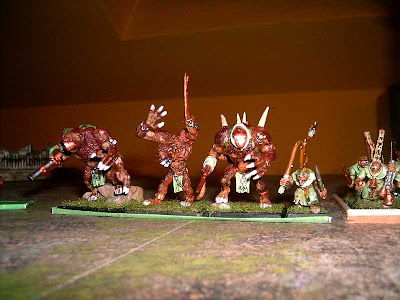 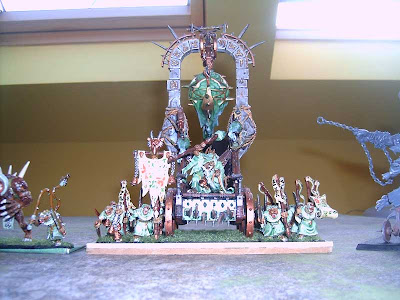 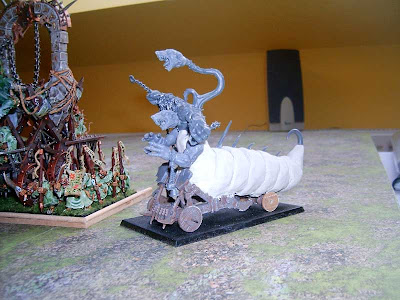 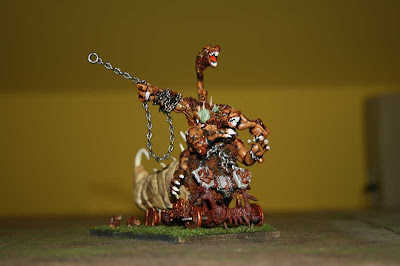 Posted by Aleksandar Šaranac at 6:15 PM No comments:

This is the first scenario from my Song of Statue Slayers solo campaign for Song of Blades and Heroes skirmish fantasy rules. Campaign can be downloaded from SBH yahoo group files.
Warband can be seen on the photo below. Members are: 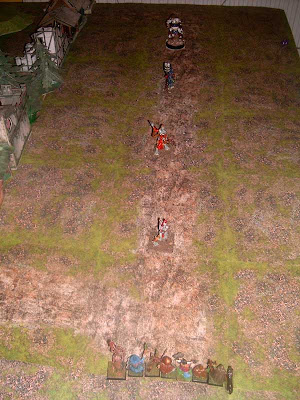 I started by sending 4 models deep, to attack Huge statue (No 4) representing biggest threat. Other 4 rushed towards the southern statue (No 1) who will wake first.
Zverka the Barbarian activated with 3 dices, moved with 2 in HtH with Statue 1, and used last action to attack. Using his Lethal and Berserk abilities, he won the fight 11 to 9, and scored first wound. Statue 1 become Q6.
Statue 1 needed 6 to wake, but rolled 1 and stayed hibernated. 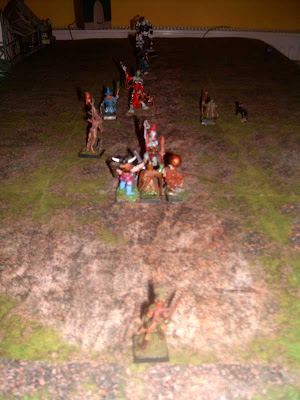 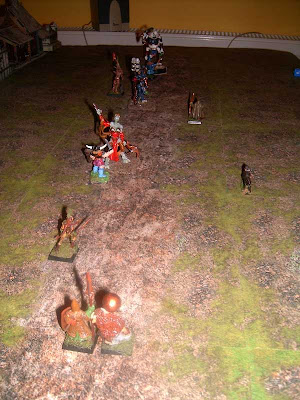 Third turn was characterized with bad dices. Barbarian tried to activate first, but got only one success out of 3, ending the turn.
Statue 2 needed 6 to wake this time, but rolled 3 and stayed hibernated.
Turn 4 again seen barbarian in action, wining the combat against Statue 2 8 to 6, lowering it's Q to 6. Vitesko Odreda also attacked Statue 2 and was partially successful. He won the fight 9:5 (rolling 6). Not enough to kill it, but statue fell! While falling, statue partially covered leader's base, so there was 50% chance for him to be smashed (on 4+), but 1 was rolled, so he managed to jump away from the falling statue.
On the northern side of the battlefield, all models attacked Huge statue, but to no result.
Statue 2 needed 4 to wake, but rolled 3 again and stayed hibernated. 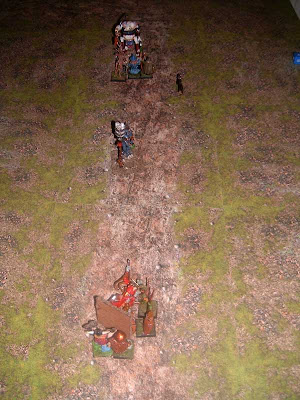 Turn 5 started with another attack from Vitesko Odreda. He won the fight against fallen statue 7:5 and killed it. Others rushed toward statue 3.
4 models on the north continued to attack huge statue unsuccessfully.
Statue 3 needed 6 to wake, but rolled 5 and stayed hibernated.

Human warrior was once more key to success in turn 6. He activated with 3 dices, moved toward statue 3, attacked with last action and wan the fight 7:5 rolling 4. Statue 3 fell!
Statue 3 needed 5 to wake, and rolled 5 so it is awake. It activated with one success, and used it to stand up.

Action on the north finally showed some results in turn 7. Dryad won the fight against northern statue 7:4 rolling 4, so the huge statue fell!
Statue 4 needed 6 to wake, but rolled 1 and stayed hibernated.
Statue 3 attacked elf warrior, but the combat ended with a draw 5 to 5.

In turn 8, Dryad was again successful against fallen statue 11:6, so the huge guy was reduced to Q5.
To the south, barbarian again used his lethal ability to reduce statue 3 to Q6 (8:6).
Statue 4 needed 5 to wake, but rolled 3 and stayed hibernated.
Statue 3 attacked elf warrior again, but lost this combat 7 to 4. Elf rolled 4 so statue 3 fell! 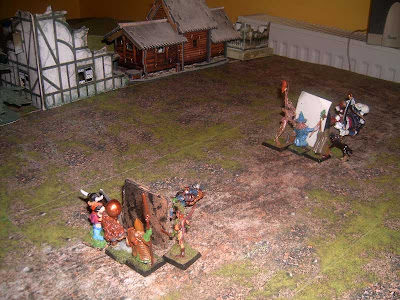 Vitesko Odreda was given the honor to kill statue 3, so he used it. To the north, Dryad had no problem reducing Huge statue to Q6, and then the Wizard stroke final blow ending this scenario with victory in turn 9.

One battle report using second scenario from Song of Statue Slayers campaign can be seen on Bren's Wargaming blog.

Posted by Aleksandar Šaranac at 4:16 PM No comments: