I started working on the set of tables that will allow solitaire play (play against programed opponent) of Song of Drums and Shakos rules by Sergio Laliscia.
Tables are inspired by Dougi's rules for solitaire Song of Blades and Heroes, with added rules to increase Napoleonic feeling.
Future system will have 4 tables, one for hard hitting units like grenadiers and guards, one for line infantry models, one for line cavalry models and finally one for light infantry.

The game described in this post represents first playtest of the system. For simplicity, I selected only light infantry models for both sides (therefore this is only test of light infantry table).
Encounter presented in this post is more then solo game, since both sides are played by the system, I am only here to assist by moving figures.
Sorry for low quality photos, I had to use my old camera to record this session.

Both sides deploy. French get the initiative, and one group move into forest, other towards the big house. Both riffles groups position themselves into bushes. 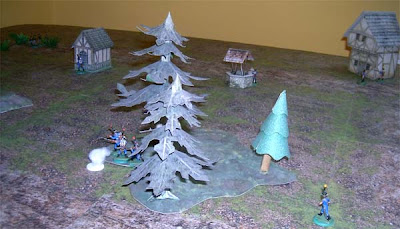 French shoot first and score first blood. Out of 3 shoots, light voltigeurs had 2 high rolls, while riflemen got 2 lows. Both rifles NCO and chosen man are wounded. Forth light voltigeur, having his 2 actions free, moved towards small house. Chasseur positioned himself by the well and shoot, but missed. 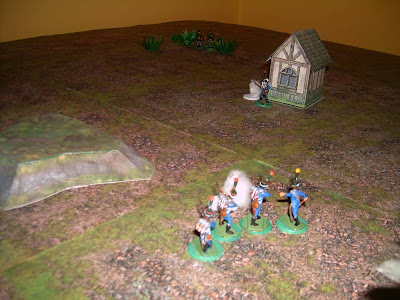 Shootout continued. Rifles scored their first blood, wounding chasseur. Light voltigeurs had to leave the forest to get into the range. 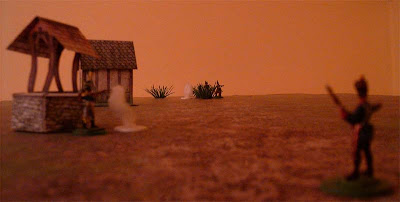 Line voltigeur and NCO moved to well and started shooting, but without result.
With all models being in cover, both French and British general decided not to move, but to continue shooting. In exchanged fire another rifleman and two light voltigeurs were wounded. This left both sides with 4 models, so next casualty will be the one to trigger morale test and probably decide the outcome of the game.
Long range of the rifles won the day. Rifle officer shot made remaining light voltigeur to recoil behind his officer, that made french leader available target. Rifles took the opportunity. First shot missed, but second scored instant kill.
This triggered double morale check for French, one for leader lost and one for losing one man over half of beginning squad.
Light voltigeur failed first test with 3 dices and escaped from the battlefield. NCO and line voltigeur were the only one left on the French side, so they also retreated, following Ending the game rule.
Victory for the British side! 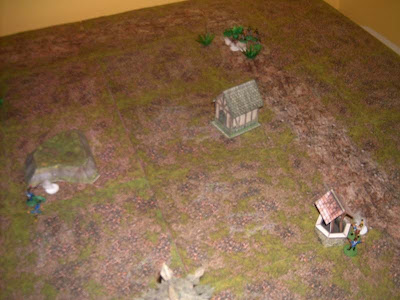 At the end, rifles performed as expected, hiding in cover and shooting to use long range of their weapons. On the other side, French force failed to use Marksman ability of light voltigeurs. I will have to change tables in such a way to force marksmen to move within 1 medium of the enemy and then shoot.
Posted by Aleksandar Šaranac at 9:41 PM 2 comments: