The final game will be packed with goodies, but if you already have some Rory's Story Cubes at home, you can download the free Print and Play test files and give a game a go. That is exactly what I did, returning to the world of Bananaman.

Picture below shows the final distribution of story cubes. 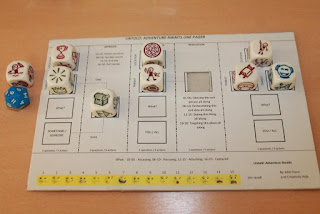 So, the story goes.
Danger scene.
Eric was attending the Police sports day at the city stadium (cup), when the Heavy Mob (disappearance, thievery cube) stroke. They sabotaged the stadium by positioning smoke bombs around it. Every member of city police is trapped within the smoke (I found all of this by asking complex questions answered by rolling cubes not yet dedicated into the board).
It is time for Eric to eat a banana. Hero is defined by two different characteristics - in Bananaman case this will be super strength and Craw, the intelligent craw.
Time for action. Craw tries to take the policemen out of the smoke by lightning emergency exit guidelines. Imagine Craw dressed as flight attendant from your favorite airline, saying famous words: "In case of emergency light strips on the floor will guide you to the nearest exit. Please note that the nearest exit may be located behind your back...."

All actions in Untold are resolved using emoticons. Player draws emoticon and then applies it to someone in the scene, resolving it in the most appropriate way. This is a great new mechanics that I really liked. Currently, there is a discussion if emoticon cards should also have oracle (yes, yes and, yes but, no, no and, no but) added to them. If my two cents count, I am against it.

So, for the Craw's action I got terrified face. Policemen on the stadium are to afraid to follow Craw out through the smoke. It is up to Bananaman to deal with the Heavy Mob.

Intrigue scene.
Of course, Heavy Mob have a darker purpose then just trapping policemen. With nobody to keep order in the city, it was easy for Eddie the Gent and his friends to get the treasure they were after (treasure chest) - a newest model of the mobile phone. 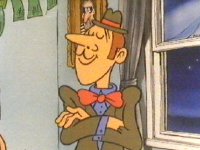 Confrontation scene.
Heavy mob escaped to their underground hideout (Labyrinth). Bananaman followed them, but got lost in the underground tunes (man with the flashlight calling). After some unsuccessful actions, Bananaman used his banana Stethoscope to listen on the walls, trying to discover position of the Heavy Mob hideout. What he heard was flushing the water in the underground toilet (ashamed face) and following this sound our hero reached the hideout restroom, only to get himself face to face with....

Revelation scene.
..... Doctor Gloom (obeying this evil person all along - stretcher with a patient cube). Doctor Gloom was holding the phone, ordering something over internet....

Showdown scene.
Bananaman followed Doctor Gloom (cube moved from Revelation card) to the cliffs overlooking the city (lowering someone cube). There, Doctor Gloom installed super powerful audio system. His goal was to attack people of the city with the terrible music (head listening some music) he ordered on-line!
Craw reacted by pulling the connector from the loud speakers. (Ashamed face) Doctor Gloom should be ashamed that he connected the complete machinery into just one socket!
Bananaman grabbed evil doctor and took him to the police station. (Irrelevant face) Unfortunately there was no one to meet them there, as all policemen were still trapped at the stadium. So, while Bananaman was searching for a key to some cell, Doctor Gloom managed to escape.

At the end, wind blew and the smoke lifted, allowing policemen to return to the city.
Eric took super powerful audio line and installed in his room. From now on it will be used only for the power of Good Music (as credits rolls up we see city trembling from loud music from Eric's apartment....).

Final thoughts - John Fiore has done it again. One should not think of Untold: Adventures Await as a real RPG, and it will not replace your favorite solo RPG gems that do for you what games like Scarlet Heroes or High Stakes do for me. And it is clearly stated that it is not an intention of this game to do so. Untold is a fun little storytelling game that you can use to play an episode of something quick and dirty. When you only have some half an hour, and you want to play something that will end up as complete story told from beginning to the end in this short time, Untold is the title you should reach for.
Posted by Aleksandar Šaranac at 10:01 PM No comments: