Well, beginning of 2016 seems to be rather quiet for solo gaming community.
And somehow, I was caught into that wind, so instead of playing alone, I spent lots of time playing with my five and a half years old son.

While he loves playing My First Carcassonne (and probably would love it even more if his 2 years old sister would not insist on playing it also), he has become a true expert in Dixit, and uses every possibility to lure me and at least one other adult (be it his mother or some of his grandparents) into the game. He even presented Dixit in his kindergarten as part of the "my favorite toy" project.

Another thing he likes very much are storytelling RPGs. I adjusted Fate Accelerated for that purpose, leaving only Main concept and trouble aspects, and  4 approaches (Cleaver, Forceful, Quick and Sneaky). 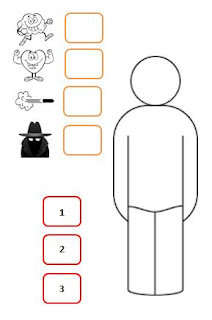 Inspired by TMNT 1987, he plays Boy ninja master who is unfortunately Too young to be able to read (he selected both aspects himself).

Our first game started as earthquake hit the town while Boy Ninja was going to the kindergarten. He tried to find the reason of the earthquake at the same time escaping falling debris, and soon he found huge sauropod dinosaur stomping through town and making earth shake.
Boy ninja stepped under the dinosaur belly, to try to detect if this is real animal or maybe a robot. Indeed there was a plate under dinosaurs belly, and on that plate it was written if this is real sauropod or not, but unfortunately he was unable to read it.
I decided not to go easy on him, so we ended the first session there.
It took my boy several hours of thoughts cooking within his brain, until the moment he run to me all thrilled with discovery - he finally understood that it must be a robot since the real dinosaurs do not have plates on their bellies.
So we continued the game. Boy Ninja found the batteries containment on the sauropod and removed his power source, saving the city.
Next, he went to the Natural History Museum (we visited it recently, so he knew where to look), and noticed that sauropod model is missing. So he decided to make an ambush, expecting that thieves will come for a new toy, after he deactivated the previous one. He located himself near the T-Rex model, the logic of which I could not dispute.
At midnight, an evil scientist and one of his muscle man appeared and tried to steal the Tyrannosaurus. Boy ninja approached them and used his ninja skills (and one fate point) to beat them in honorable combat.
He then waited for the morning and police to appear.
At the end, police officer thanked Boy Ninja for catching evil scientist, but had to fine him for trespassing  through Natural History Museum at night.

It was a good game, and my kid is constantly asking for more. The second adventure (featuring mad ice cream man turning people to ice) also went rather well, but then I had to postpone next session until I  think of some good adventure hook for 5 years old super hero. Suggestions are welcome :)
Posted by Aleksandar Šaranac at 11:40 AM