After several sessions, I have finally defined the way that Game Master's Apprentice cards / ALONe system gives the bast game for me.
As it is already visible in earlier sessions, while original ALONe game starts from 0 and then tries to beat difficulty generator by building positive modifiers, better solution for me is to start the counter with 5, and then add or remove narrative elements or Descriptors as needed. Then, I am comparing the result with the Difficulty Generator.
When it comes to the usage of Fragments, I also prefer to use them differently than described in ALONe. My way is much closer to the use of FATE points. Sometimes I will use descriptors to add +1 or -1 to the total, and this does not affect Fragment pool. But sometimes I want to increase the result, using Fragments. All descriptors can be used in positive and negative way for this.
If I am deciding to use descriptor in negative way, I will not use Difficulty Generator, but I will automatically use Bad odds for outcome. Qualified answers are not used in this case. If I do this, I am also entitled to add one fragment to the pool.
Positive use of descriptors is done after the Difficult generator number is drawn, and in case when the result is bad for the character. If there is a descriptor that can influence the result, and it was not used to affect the total, I am paying one fragment from the pool and adjusting the total by +2 or -2 to get the result I want (usually Yes result). Here is how it looks in-game:

Tension set to 4. Since this is end game part, I would say that Fragment pool is 0.
After settling the affair with Actors from the Circle of the grail, Balthazar collected the assets needed to reach the mountain top where the Grail was said to be located.
He got the air zeppelin from RSSPE, but can he get a good pilot to take him to the top?
I will take the bad odds due to the "Better equipped then average Agent" descriptor that claims that some agents from RSSPE are angry at Balthazar and will not participate in his projects. This will gain me a Fragment. No - no good pilots want to come, so I will have -1 to all piloting tests.

Zeppelin approached the snow peak and tried to land. Can the bad pilot make the feat?
5-1 for bed pilot = 4. Difficulty generator is 6, so bad odds - No.  But even odds on this card give Yes answer, so I am using my "Better equipped than average agent" descriptor to say that Balthazar got the best zeppelin available, and that the ship can land on autopilot, thus moving my total from 4 to 6 into the even odds zone. I am paying the Fragment, and my pool is back to 0.

What's on the mountain's top? 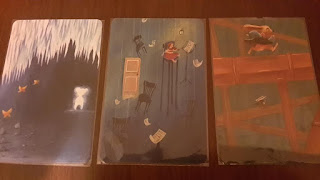 Cave mouth was visible near the top of the mountain. The wind blowing through it created some strange kind of music, and as back beat, there was a sound of a running feet inside the cave.
Can Balthazar find some clues (footprints, animal remains, etc) that can direct him to the nature of the creature running inside the cave?
Odds bad, due to the "Specialization in social sciences" descriptor that acts as negative for nature tests. Gain a Fragment. Result: No (-1 to all tests against reason for running feet sound).
Balthazar entered the cave, his revolver ready.

Chamber 1: Water (knowledge) - heart, skull, moon.
The walls of the first chamber in the cave were obviously painted by some intelligent being. The paintings seemed to be centuries old, but once Balthazar approached them, he could recognize the faces represented. One picture showed his father being shot in his office in RSSPE by an unknown assassin. Other depicted his mother dying alone in an empty back street of the capital, covered by heavy rain, with no one near to help her.
Can Balthazar concentrate on his mission after seeing his parents  deaths? Yes, IF he does not get further info confirming that images on the wall tell the truth that can not be reversed.

Chamber 2: Earth (Unchanging) - heart, skull, sun.
This is a kind of library, holding newspapers from the future.On special stand, there were issues proclaiming death of his parents.
IF from previous chamber happened, so Balthazar will have -1 to all further tests in the cave.

Chamber 3: Air (Movement) - skull, sword, target.
Rune: Algiz - guardian. Vice: Lust. Belongings: Keys.
Igraine Zooma, Succubus once banished by Balthazar's hand, now stands in this cave holding the key tot he chamber with the Grail.
Balthazar was surprised. He had not expected succubus to guard the holly grail!
The only thing he could do was to pray to Saint Audrey to bless his bullet.
5-1 disturbed -1 against footsteps owner +1 for praying upon saint's tarot deck = 4. Difficulty generator 6, odds bad. Still Yes. Element is Water - AND saint's spirit blessed the bullet and wrapped itself around him, allowing Balthazar to use his "connected to other side" descriptor in next test.
Balthazar shoots his gun. Will this affect the succubus?
5 - 1 against demons from "Selected lesser evil" descriptor -1 disturbed -1 against footsteps owner +1 blessed bullet = 3. Difficulty generator 4 - odds even, Yes BUT - I use Fragment and "connected to other side" descriptor to delete BUT part.
Damage on succubus: hearth, target, moon.
And so, Igraine Zooma was banished again. It was one banish too many for her, and she will not be able to influence world of mortals for 100 years, so she will never cross the path with Balthazar again.
Our hero picked the keys and unlocked the door to final chamber.

The chalice was there. As he took the Grail in his hands, he knew that his life will never be the same again. The rest of his time on earth will have to be dedicated to protection of this relic....

Posted by Aleksandar Šaranac at 1:08 PM