As I already mentioned on this blog, I think that 5th edition of D&D is just perfect for solo play. It has anything you need, from perfectly defined system, to good random dungeon creator.

So I tried several times to play a 5th edition dungeon crawl, but with moderate success. I was definitely doing something wrong. Then, it occurred to me that encounters are too difficult. I finally understood that the XP thresholds table on the page 82 of DM guide is meant to be used with party of 3 to 5 characters. If you use less characters, you need to implement encounter multipliers in reverse. This is actually written on page 83, but somehow I missed that info earlier.
Basically, using this system for single 1st level character, easy encounter is up to 13XP, medium from 13 to 25, hard from 25 to 38 and deadly from 38 to 50 XP.

Once I adjusted the difficulties, everything went smoothly.
And so, below you can find first write up from the (ongoing) 5th edition dungeon crawl campaign.

The hero of this story is Oldbook, half-elf bard who spent his young years working as librarian. Once the library in his home town fell into hard times, he picked his adventuring gear and descended into the famous dungeons below the city of Deepcold hoping to find enough treasures to sustain the library. 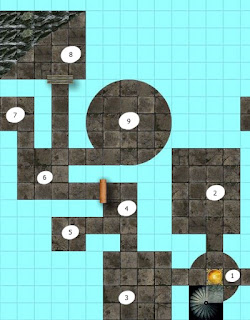 Numbers on the map correspond with the numbers in the text below
1.
Oldbook descended into the oval room with well in the middle. After successful research test, he was able to hear roaring of some monster deep down in the well. But he failed history test, so he had no idea what monster is down there and why. Still, thanks to his researcher feat, he has a chance to find it out, once he returns to the surface.
2.
Hall appears to be empty, and no other exits were visible. Then, Oldbook noticed the plate that triggers magic missile trap. He decided not to risk further investigation, and returned to room 1.
3.
It was once a reception room. Oldbook was attacked by a single Strige, but he killed it easily. In the corner he found a body of a men, dried from blood. 11 Sp was lying next to it. Adventuring started to pay off, both in money and experience.
4.
This was once a gallery - where a pictures once were, now there are only empty frames. Then, what at first seemed to be just a root of some three, started to move. It was a Twig blight. Oldbook killed it without even drawing a sweat.
5.
Small room with no other exits. It was inhabited by a single bat and a poisonous snake. Half-elf had nothing against animals, so he decided not to disturb them and returned to room 4.
6.
After carefully opening the wooden door, Oldbook have found himself in the chapel. A single cultist was performing some dark rite near the altar. In the battle that happened, half-elf managed to kill the cultist, but was himself hurt. He took short rest to recover to full health. Librarian also tried to recognize the signs to detect to whom is the chapel dedicated, but he could not decipher the symbols (failed religion test).
7.
Pet room, lair of two rats. They surprised our hero and hit him for two points before he could kill them with his rapier. Room had no other exits, so he returned to chapel 6.
8.
Portcullis leading to this guard room was closed and locked. Through the gates, Oldbook could see that the room has some coins scattered on the floor. He could also see that part of the room collapsed, leaving the chasm that probably can be used as a way to deeper levels of the dungeon.
9.
Robbing room with no visible exits. Two shriekers were planted in the middle of it. Behind them, Oldbook could see some ceremonial items. Bard decided to run past the fungi and take the items. As it was expected, Shriekers sounded the alarm. Oldbook was not waiting to see who will answer it. He took items and started running back. Once he entered the chapel, he noticed that portcullis was now open. But he also noticed that something was climbing up the chasm. It was a Ghast. So Oldbook left the chapel closing the wooden door behind him and moved fast towards the exit from the dungeon. Lucky for him, Ghast was not giving a chase. The creature stayed in the chapel, probbably feasting on the body of dead cultist.

Out of the dungeon...
Oldbook stayed in the city and took the long rest, paying 2gp for comfortable life style.  He examined objects he brought from the dungeon - a mask, a chalice and a bone dice. Finally he realized - temple in the underground was dedicated to Orcus, demon god of the undead!
Bard spent next two days looking for a merchant willing to buy the items. Finally he found one who give him 27gp for the 3. Less then he hoped for, but beggars can not be choosy.
Librarian also tried to acquire some information about the monster in the well, but everywhere he ask he was met with the wall of silence.
So, he purchased some dried rations that can last in the dungeon just in case, and returned into the underground...

Posted by Aleksandar Šaranac at 11:28 PM