I wanted to spice up my solo RPG life, and to take a break from 5th edition adventure, so I decided to try to play with Fate RPG.

I decided to start with a game called Diaspora, since it has very nice world building mini game. As it is always the case, world building needs 3 players, so I decided to emulate two of them, Mr. Good and Mr. Bed using Rory's story cubes. Therefore, first two systems are mine, systems 3 and 5 are owned by Mr. Good and systems 4 and 6 by Mr. Bed. I picked up characteristics for my systems, while characteristics of other 4 are rolled using fudge dice as described in Diaspora.

In Diaspora, all space travel occurs by the predefined trajectories called slipstreams, and it all happens within a group of star systems connected into clusters.

To start, I made a 6 systems cluster that looks like this: 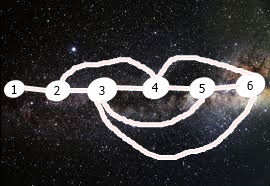 Lines that connect systems are slipstreams. Basically, from system 5, you can directly and instantly reach systems 3, 4 and 6. To reach system 2 from system 5 at least two jumps are needed. Slipstream configuration is rolled using Fudge dice as described in Diaspora book.
Below are descriptions of systems, after all in-game adaptations were made.

Story: In the old time, The Zone was known by some other, now forgotten name. At that time, it hosted a civilization so advanced, that humans who lived there were immortal.
System was so terraformed that on every place - even between planets, there was air, perfect temperature and optimal pressure. Nano technology took care of all things, humans were safe and supported wherever they are.
Nano technology was so advanced that there was nothing people needed to do. So one day civilization collapsed due to the pure boredom of  its inhabitants. From that moment until today natives of the Zone are just laying in their beds doing nothing - some say they are meditating meaning of life, others say they are just sleeping to shorten the boredom of their immortality.
Now, millions of years later, old name for system is forgotten and it is known just as The Zone. Some of its immortal citizens are still there, living and dreaming their impossible dreams. Their ancient technology is scattered all around them.
So, The Zone became a paradise for Stalkers, brave people ready to enter the system and return with the artifacts that will be richly paid in other systems of the cluster. This is dangerous profession, for many stalkers enter the Zone, and only few of them return. Some become victims of the nature that is taking back the system - dangerous life forms roam free through the Zone. At some places nano technology stopped working, creating holes without air, gravity or pressure - places that only experienced stalkers can recognize. Some stalkers become victims of misuse of strange technology. Some are even destroyed by ancient sleeping beings, as punishment for disturbing their eternal rest.
Another thing that makes the profession so dangerous is a fact that every stalker must go into the Zone by himself. Slipstream ship can emerge near one of the system poles, from where special small slipstreams can take smaller shuttles instantly to the desired place in the Zone. If the shuttles are crewed with one lone stalker, they will occasionally return to the mother ship with the loot. But each time two or more stalkers tried to enter the Zone as a team, they dissapeared never to be heard of again.This occurrence become known as "One man rule - go alone or do not go at all".
One of the mini streams can take a stalker trained as a pilot to the mother ships graveyard. If a lone pilot can take a slipstream ship on trust drive from there to the jump area, crew is added and it becomes part of the cluster fleet. The biggest part of slipstream technology in the cluster is acquired this way.
Food of perfect quality is available everywhere, but since every transport is limited to what one man can carry, organized export is not possible.

Story: Outpost is a gateway to The Zone since it is the only system that has slipstream connection to it. They use this fact to prevent free trading of the artifacts. Every ship coming from The Zone must go through customs, where Outpost government takes percentage of the estimated value of each artifact. Outpost government also preserves for themselves right of first buy, and they are purchasing all artifacts they do not want to be distributed through the system - mostly food replicators and heavy weapons.
Outpost protects these rights with strongest and best equipped mobile military force in the cluster. People living on the Outpost are either stalkers, traders or solders, or some mix of the 3.
Long time ago Outpost was a H0 system, but overpopulation, extreme use of resources and pollution made living outside of artificial created environments impossible. Food is acquired from food replicators - it is not tasty but no one is hungry. Replicated food is exported to the Destination. Real grown organic food from Nest or New Hope or special food from the Zone or Glory are considered delicacy and luxury.

Story: Destination's only habitable planet may seem like a perfect holiday destination - half of the planet is covered wit clear shallow oceans, while other half is covered with wast evergreen forests.
But things are not so perfect under the surface.
The evergreen trees that grow anywhere are the only native living beings on the planet. No other vegetation can grow on Destination soil. Furthermore, no part of this tree is eatable in any way for any known being - not even for bacteria.
Considering the fact that Outpost forbids food replicators to be used in any other system except their own,  Destination is forced to import already replicated food, so in this system eating is very expensive habit.
Big chunks of land on Destination are owned by rich artifact merchants or high ranked soldiers from Outpost or tribe lords from Nest. There they have they holiday villas.
Sea shores are filled with hotels where less rich but still well suited citizens of these two systems go for they annual vacations.
People born on Destination are always poor.  They work for small wages as servants, bartenders and entertainers and collect what food remains after guests finish their feasts in order to feed their families.
If a family of locals ever manage to collect some savings, they buy a place on a first slipstream ship to Outpost or New Hope.

Story: The only habitable planet in a system is a hot desert. Tough conditions made rough people - locals belong to the tribal culture that glorifies war. Thanks to the aggressive approach and sometimes even insane bravery,  Nest has second best known army in the cluster. They are not annoyed by the fact that most other systems do not call it an army, but a pirate fleet.
If unprotected ship happens to meet Nest ship in neutral space, or even worse within Nest's territory, it will certainly be attacked and robbed. So if one goes into Nest, one goes heavily armed. Only then the brave merchant can hope to gain a good profit by exchanging artifacts from the zone for the rare delicious food in the cluster: meet and eggs of the desert lizards whom Nest tribes grow as a cattle.

Story: Up to recent, this was uninhabited system. Only few hundreds of years ago, Outpost and Nest agreed that this may become a place that willing and unwilling refugees and unwanted persons from the cluster can call home. They were given limited terraforming tools and an empty system, and were allowed to build the community for themselves. Experiment is still in the early phase, but it shows results better than expected - colony grows, and they are managing even to produce some eatable plants in quantities enough to satisfy their own needs, and even to export some to Outpost.
Some important persons from Outpost are suggesting that this is a proof of Glory spreading their interest zone by helping New Hope colonists in secret, but so far no one was able to prove this claims.


Glory is a closed system, and in the rest of the cluster very little is known about it. Slipstreams to the system are blocked, and can be used only by ships from Glory itself. These ships are of different design than the ones taken from the Zone, and thus it is supposed that Glory developed it's own slipstream technology.
Still, slipstream ships from Glory are not seen very often. They appear only when Glory thinks that it needs to secure it's interests in the cluster, mostly messing with the plans created on Outpost or Nest - either by demonstrating military might or by delivering organic food and advanced technology to strategic places like poor villages of Destination or colonies of New Hope.
Sometimes, refugees manage to hide themselves between food or equipment crates. They plead for protection from the local government, describing Glory as the nightmarish place, where people are constantly oppressed by iron boot of the regime.
But it also happens that the most talented artist of the cluster are sometimes invited to board on the Glory slipstream ships in order to study and perform in the closed system. When they return, they describe Glory as a paradise, place where science and art create miracles unseen in other systems of the cluster.


I really like the way it turned out.
Since food is a rare thing in the cluster, it seems to be the most important resource.
The Zone is a great starting point for the campaign, and once I create a character I plan to start there by playing a stalker straight out of Strugacki brothers books.
Later, there is a plenty of politics to explore, with 3 super-powers in the cluster, each with its own goals and techniques.

So, I hope to continue this game soon, using mix of Diaspora and Fate Accelerated. I will keep you informed about the progress.
Posted by Aleksandar Šaranac at 10:25 PM