After returning to the dungeon, Oldbook took right corridor from the room with the well. 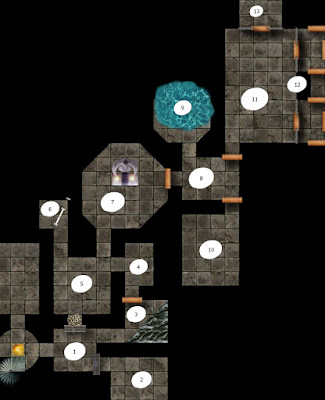 1. Training room, containing stone jaws trap. Oldbook detected it and managed to avoid it, but will have to test to pass the trap every time he passes through this room again. Metal doors on the north are jammed. There are metal doors to south east to room 2 and passage to the north east to room 3.
2. Behind the metal doors there was a workshop for embalming the dead. Empty, no visible exits. It was a trap - sliding walls. Oldbook just turned around and closed the door.
3. Crypt. The part that was once containing graves collapsed into the lower levers. Is something coming from the chasm (25% chance)? Yes. Zombie is trying to climb up! Oldbook runs north and closes the wooden door. He will have to find another way to return to surface.
4. Giant fire beetle nest containing 4 creatures. They seem peaceful now, but who knows how they will behave next time someone comes in.
5. Crypt entrance. Cave in prevents metal door between 1 and 4 to be opened. Can it be removed (33% chance)? Extreme yes. Oldbook removes the dirt and opens the door. Now he has a way back, and he can also avoid trap in 1!
6. Crypt for less important burials. Still, steel crate blocks passage to the tombs (maybe even to prevent it's inhabitants from praying on living?). Some coins can be seen on the other side of the crate, out of reach. Oldbook decided not to disturb the dead, and returned to 5.
7. Trick - harm thief. A suit of studded leather armor is displayed on the stone altar.  Oldbook failed his perception save, so he reached for the armor that seemed to be poisoned. He took 5 damage from poison, and had to take short rest to recover.
There is wooden door to the east.
8. Antechamber. There is a trap here - locking pit filled with water. Oldbook successfully detected and avoided it.
9. Guard room, partially flooded. Otherwise empty.
10. This room will be explored later.
11. Schoolroom once, now a home for a Flumph and 2 Myconid sprouts. They seemed to be friendly, so Oldbook asked them to allow him to take a long rest. They agreed. Oldbook even received a cryptic advice from Flumph (Rory's story cubes - dice, monster's claw, mountains): "risk it with monsters in the mountains". So far without meaning, but it may develop into something later.
12. Courts. Flumph filled both of them with Shreakers, to alarm him  of unwanted presence. Lots of wooden doors leading in all directions.
13. Shreaker farm - where Flumph rises his pets. No exits.

Well rested, Oldbook decided to investigate what is behind wooden doors to the south of room 7 (area marked 10)
It was a room with no exits, but a lair for a Kobold and his pet Rat. Combat was difficult, and in the end Oldbook managed to kill his enemies, but was himself hurt and deprived of resources.

Therefore, our hero returned to the city, determined to find a henchmen - a cleric that can help him put an end to the zombie plague in room 3.

To be continued....
Posted by Aleksandar Šaranac at 12:23 PM