(Earlier adventure of Andrzej Niegolewski can be found here)

I have a mission for you Andrzej, said Kozuletski. There is a small village not far from here. It is just few houses, but it is good place for troops to camp. I want you to take couple of your boys and secure this village. French will send some line voltigeurs as well.
I believe that British also know about this place, so expect trouble. Try to keep the village at all cost. This small victory can tip the scales of the next battle. 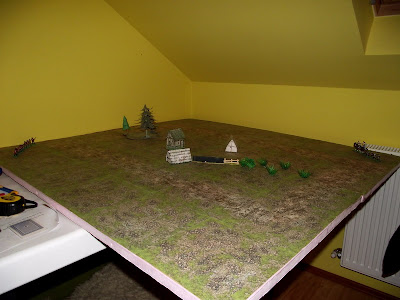 Game is played using Flintloque 3rd edition light rules that can be received for free directly from Alternative Armies web page, or from their Yahoo group. British soldiers are led by slightly modified Flintloque solo bolt on rules.

Using the speed of their mounts, Niegolewski and two of his lancers arrived at the village. French light troops were right behind them. While British soldiers slowly approached, Poles and French took defensive positions.
One of the British soldiers tried to enter the village, but was hit by musket fire so he returned to his line, heavily wounded. 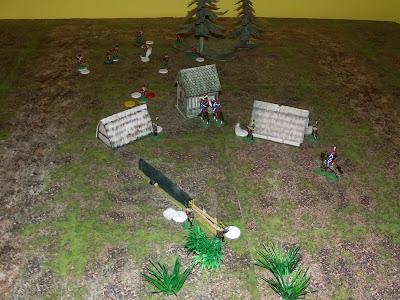 Another tried the same thing and he managed to engage two voltigeurs into close combat. Line soldiers are often better in these things then light companies, so British soldier managed to get one of the voltigeurs out of fight and another pushed back! 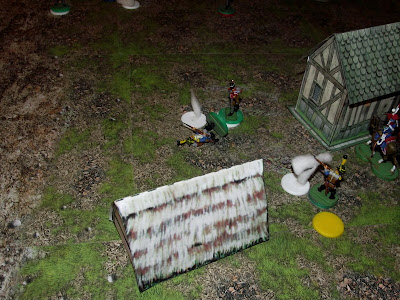 Polish lancers approached brave British soldiers and fired their pistols into him from close range. This is first British out of fight!
But one of the lancers got exposed, and put out of fight by aimed shots from British line!
After some distant shots were exchanged, another British soldier went OOF. Second lancer had enough of hiding and he did what he knew best – charged! 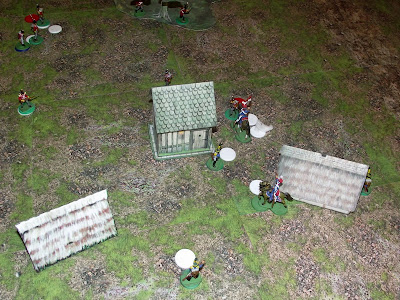 He runed his lance through the nearest British soldier, killing him on the spot. But he exposed himself to musket fire, so first bullet throws him from his horse, while second puts him OOF.
Niegolewski took the clear sight of the enemy officer and charged. 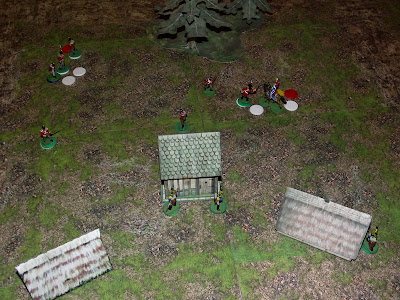 But British officers are famous as good swordsmen, and Niegolewski got wounded. Finally, another British soldier joined the duel of the officers, and together two British men managde to throw Polish captain from his horse. 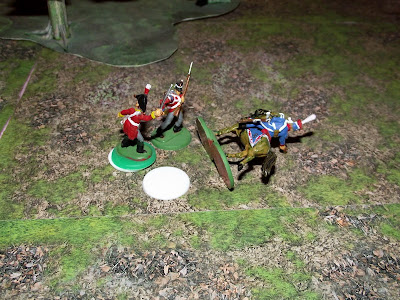 French voltigeurs run to the wounded officer and retreated with him from the field of battle.
British soldiers camped in the village that night…

If you can judge the whole book from the light rules, Flintloque 3rd edition seems like a great rule set. It is made for fantasy napoleonique wars, but I do not have any figures for that setting (yet) so I played with my regular Napoleonic troops, and it worked fine with historical settings.
What I especially liked in this game is balance between movement and shooting distances and modifications, which is the best I have seen so far among the skirmish games.
The game lasted rather long, took me 4 hours to play 9 turns, but it is OK considering that I am new with the rules and that I was constantly flipping pages to find explanation for one situation or another.
Solo engine is good, with only remark that it does not define order for activation of enemy soldiers. This can be easily overridden by giving each enemy a number, and then drawing cards to see the order they activate.
This was a fun game, and I think I will use Flintloque a lot in the future….
Posted by Aleksandar Šaranac at 10:11 PM