On a Way Back to the Unit

The Battle of Somosierra occurred November 30, 1808 in the Peninsular War, when a French army forced a passage through the Sierra de Guadarrama shielding Madrid.
At the Somosierra mountain pass, 60 miles north of Madrid, a heavily outnumbered Spanish detachment of conscripts and artillery under Benito de San Juan aimed to block Napoleon's advance on the Spanish capital. Napoleon overwhelmed the Spanish positions in a combined arms attack, charging the Polish Chevau-légers at the Spanish guns.
When superior officer Kozietulski lost his horse after taking the first battery, charge was led by young Lt. Andrzej Niegolewski. At third battery Niegolewski was thrown from his horse among the Spanish foot soldiers. He received nine wounds from bayonets and two carbine shots to the head. 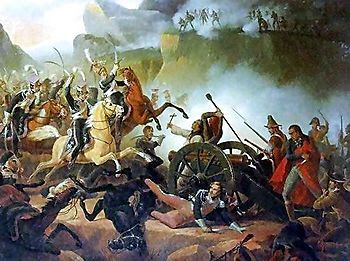 The complete action at Somosierra lasted only couple of minutes. After the victory was secured, commander of Napoleon’s guard Jean-Baptiste Bessières approached the young lieutenant, who managed to whisper: "Monseigneur, I’m dying, these are the guns I conquered. Tell Emperor about it!"

Late March of 1809 found Lt. Andrzej Niegolewski, now proud bearer of L'Ordre national de la Légion d'honneur, leaving hospital in Paris and returning to Spain to rejoin his unit (up to this moment all written is historical data. Real Andrzej Niegolewski died in 1857 in Poland. You can read more about him and Battle of Somosierra here. Everything further is gaming material.)

Lt. Niegolewski was leading group of other recovered soldiers including a horse grenadier, hussar, and a light infantry squad consisting of NCO, chasseur, voltigeur, and carabinier.
Somewhere along the road, they have encountered British patrol consisting of rifles officer with two riflemen, grenadier NCO with two grenadiers, light dragoon and a hussar.

Game was played using Song of Drums and Shakos ruleset. I was playing French while British were played by Lone Shako solo rules. 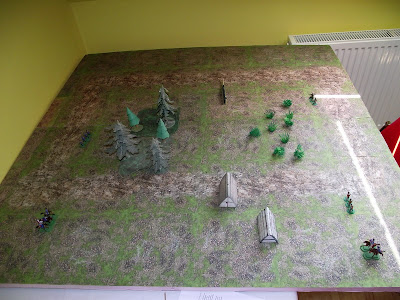 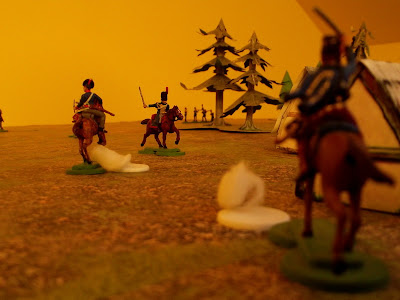 French Horse grenadier charges. His charge is so terrifying that both British light cavalrymen run away from the table! 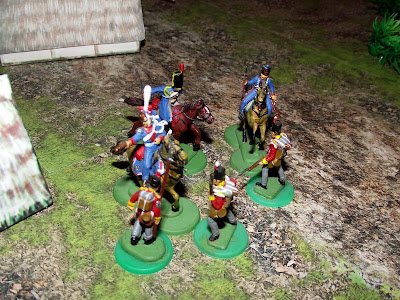 But British foot grenadiers are not scared so easily. They stand their ground against overwhelming cavalry attack! 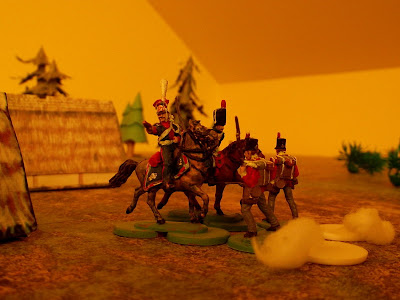 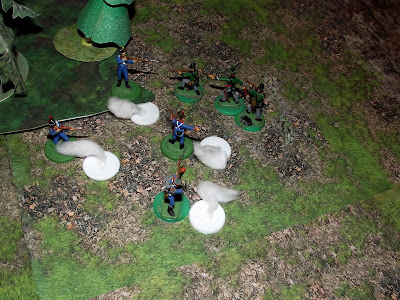 The east part of the battlefield witnessed a lot of light infantry movement and several missed shots. At the end, firefight among the woods ended without wounded.
Once all British grenadiers were wounded, riflemen took the morale test, but all stood their ground. Finding himself with loaded rifles against unloaded French light troops, British officer called for Lieutenant Niegolewski and offered him his sword to avoid more bloodshed, which Polish officer gladly accepted.

What I learned from this game is that when facing enemy troops with fear special ability, you should keep your soldiers as far from table edge as possible. This was easy victory for me because I have deployed British troops badly. Both British light cavalrymen failed just one morale dice when confronted to Horse grenadier, but being close to table edge that was enough for them to leave the board. If they were closer to the middle of the table, they would just backed up, and that might make a lot of difference.

Posted by Aleksandar Šaranac at 9:21 AM