Some time ago, I have received a reviewer copy of 6D6 core RPG game. I have to say that I was surprised once I moved through the rules for the first time, since 6d6 core feels and plays as mix of RPG and collectable card game! 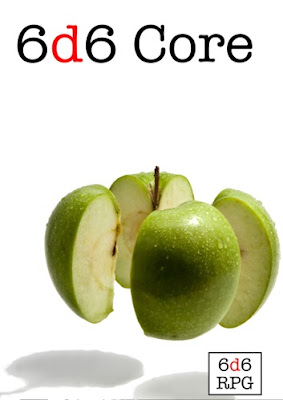 I do not want to repeat what other people said, so I will not try to explain mechanic of the game here. Please read posts on tankarstavern and gameknightreviews for that. Come back once you read it, this blog will be waiting :).

It is obvious; 6d6 core is many games in one. If you have Game Master and several friends, you can play it like any other RPG. If there is just the two of you, you can create two characters and start a duel, just like with any CCG, with the one difference that 6d6 encourage you to create your own cards instead of to buying their, premade ones.
But for this blog, the most important question is, of course, can 6d6 be played solo?

The answer is definitely yes.
6d6 Core is not planned to be used that way, so there is no mention of solo play in the book. But being a card driven game, the possibilities for solo play it opens are many, and the rules need just a little tweaking.

The very first idea I had was to make an “opposition deck” from where I would draw events and dangers my hero will have to face. This opposition deck should be populated with some generic and some genre specific cards.
Generic ones I created by simply writing on cards words from Event Meaning: Action and Event Meaning: Subject table of Mythic Game Master Emulator. All this cards have power of 1d6+0. The bad news is that you have to produce 200 cards. The good news is that you have to do it only once, after that you can use the same cards in any game you play, regardless of genre.
Opposition deck should hold at least 100 genre specific cards like Goblin shaman or Chtulhu or Partial fingerprint. To increase tension of the game, some of these cards should have variable power. For example, daemons and chaos cultist your inquisitor meet will be less powerful on the upper levels of the hive city, and will grow stronger as you descend deeper. So the power of such cards should be 1d6 + level, that will produce 1d6+0 on ground level to 1d6+3 for a third level of the underground.

It is also good to move your solo experience with 6d6 a little towards the feel of board games. 6d6 Core solo version can really profit if you use it with some kind of map or tiles, be it ever changing dungeon for fantasy setting or the blueprints of the hunted mansion.

The game mechanic is simple. Each time the hero enters new chamber, draw two cards from the deck and interpret them as you would do with Mythic GM Emulator. That will be opposition your hero will have to face this turn. The very nature of the card drawn will decide if the scene is narrative or action, and in that way limit the range of cards hero can use.

I am currently in the middle of a Cthulhu themed game using 6d6 Core for solo play as described above and so far it is very fun experience. My next post will be a write-up from this game, and there I will explain some mechanic elements I used in detail.
Posted by Aleksandar Šaranac at 10:27 AM