I started solo Microscope session with help of Mythic GM Emulator. My plan is to create history of the world, take it to the edge of cataclysm, and then play few classical adventures with mythic and my favorite Chaosium Rune Quest 2 engine in this world, to see what happen next.
There would be 3 players, each with his or hers chaos factor, according to Risus Monkey’s idea.
Players are me (CF5), Romantic (CF 6) and Warrior (CF 7).

BIG PICTURE
Magical world raises, develops and comes to the edge of cataclysm.

FIRST PASS
Me: Event in world creation period – gods awaken into the world already created, but unshaped and bare (L).
Warrior (MGME: Trick Home): Event in world creation period –gods create image of the shaped world. World itself is not yet shaped, it is just the image to work by (L) (hello Tolkien:)).
Romantic (MGME: Gratify Rumor): Period – Age of Enlightenment – scholars from all mortal races discover new things and seek the knowledge long lost. (L)

TURN 1
Me as Lance: Focus on Image World

1. Event in Age of Enlightenment – Imagists, order of scientist and mages of all races dedicated to discovering secrets of the Image World rise to power. (L)

2. Scene.
QUESTION: How does the real world differ from the Image of Gods?
Setting the scene: At first imagists were few, located in isolated houses. They worked in secret, afraid of what they might find, gaining knowledge through rituals, magic or researching old books.
PICKING CHARACTERS
Banned: Gods.
Required: Two scholars.
Romantic (UNE: Fickle Home maker, suggest vigilance, assist elite) Laila, first scholar, human female assistant and lover of main scientist, keeps his home and his notes in order
Warrior (UNE: glum servant, manage deprivation, defile enemies, depress vigilance) he will play Time, in the form of the rival group who tries to stop Imagists from publishing their discoveries.
I will play second scholar, Vuluche, elf male scientist.

R (MGE: Antagonize messages) “My Lord, we have to leave this town. Mob is gathering against you inspired by the whispers of our enemies!”
Will W pass this turn? Scene is just beginning, so Very likely – 65. Rolled 52, yes.
Me: “Nonsense Laila. We are respected citizens of this town, and most of the people here know me very well. They will not harm us in any way.”
R (MGE: Desert a project) “My Lord, I have the information that mob will attack tonight. If we want to live, we have to go now, and leave everything behind. I am begging you”.
W (MGE: Block Animals) Distant barking of the chase dogs can be heard. Mob is gathering, ready to pursuit the pair even if they try to run away.
Me: “I am confident that they will not harm us. Our equipment is too valuable to be left to the mercy of commoners. A little riot in front of our house is no reason to abandon all the knowledge we have gathered so far.”
R (MGE: Kill death, well opposite to death is birth) “My Lord I am pregnant with your child! For the sake of this new life, please come with me! “
Me (stepping in to answer the question!) “This can not be! Humans and elves are different species; they are unable to have common children! No document about Image World mentions such a creature!”

ANSWER: Mixed races were never part of Image World but started to appear in the real history. (L) 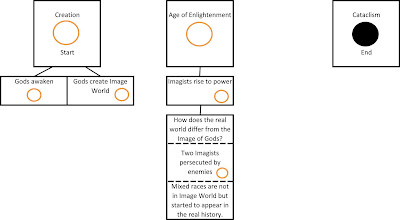 For Session 2 go here.
Posted by Aleksandar Šaranac at 11:06 AM