As I mentioned earlier, I was tactically beaten by the system in the very beginning, but I decided to go on with my initial plan, since this was my first game of Moral Napoleon, and I wanted to see what will happen. 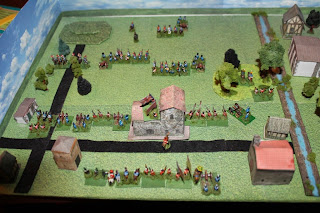 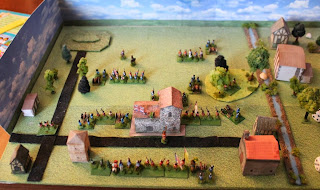 Vistula legion attacking columns pushed forward, but their advance was too slow. British Light unit from the west had enough time to move into flanking position, and I had no units to counter it. 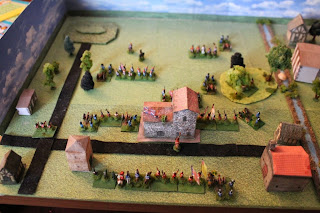 So, British light infantry charged one of my columns to the flank and rooted it. Another of my columns rooted when it broke upon the walls of the building guarded by British Foot Guard. 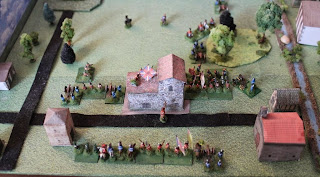 Victories I counted on the east - my hussars rooting British hussars, and my columns rooting two British line infantry were in vain - British forces had fresh reserve, and my units were open for rear attack, so I decided that I had enough. 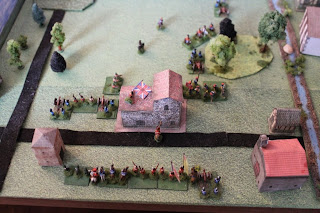 What I learned: French troops with several bases are heavy hitters, but they lack the mobility and terrain usage possibility of one base units from the British side.

Next time, I will spread the front line of my units to prevent flanking, and I will keep at least one unit of infantry to the back. Maybe the result will be different then.

Although  Muskets and Shakos will stay my favorite Napoleonic game from 2HW (mostly because the scale of engagement there is more suitable for me), Morale Napoleon is a nice effort, and the one I will return to occasionally.
Posted by Aleksandar Šaranac at 11:37 AM