So, it is time for full scale attack using Muskets and Shakos rules by 2 Hour Wargames! 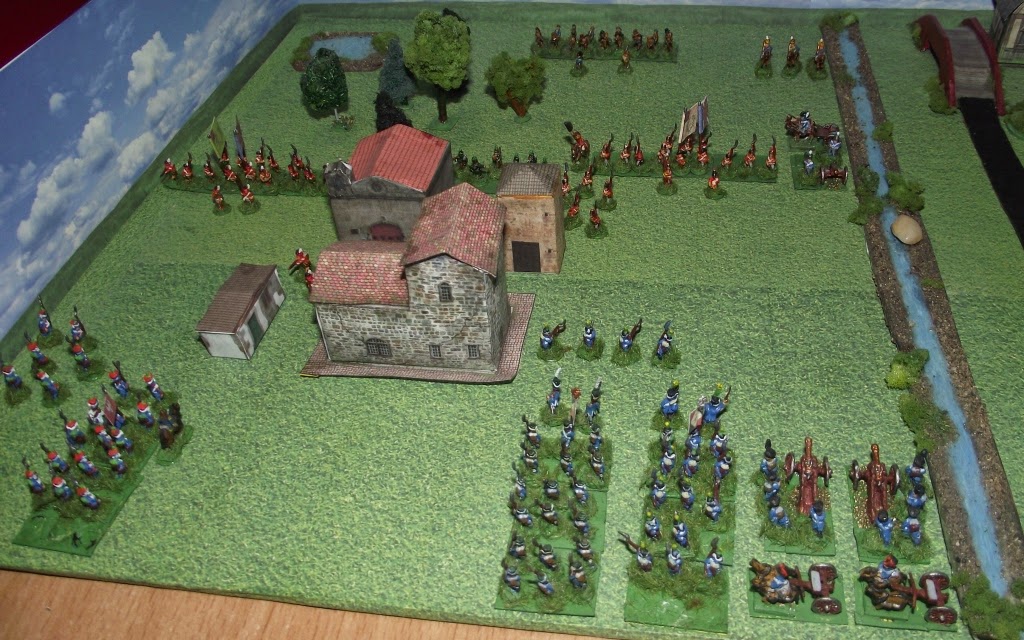 Battle takes place around small village. There is a creek on my right wing (through sections 3, 6 and 9).
In first wave, I deployed my guns on the right wing (made a mistake, one of the guns should have been deployed on the other side of the creek, it would give more space for my units to maneuver, and clearer line of sight for guns). French light infantry and line infantry were deployed on the right also.
On the left I deployed first Vistula legion accompanied by brigadier.
British response put Highlanders in the line opposite to my Poles, some rifles in the center and a unit of British line accompanied by brigadier and section of guns to my right.
Some Spanish guerrillas were positioned on far center, and independent unit of 3 horse skirmishers hussars were on the far right. There was one unresolved PEF in the forest on the left. 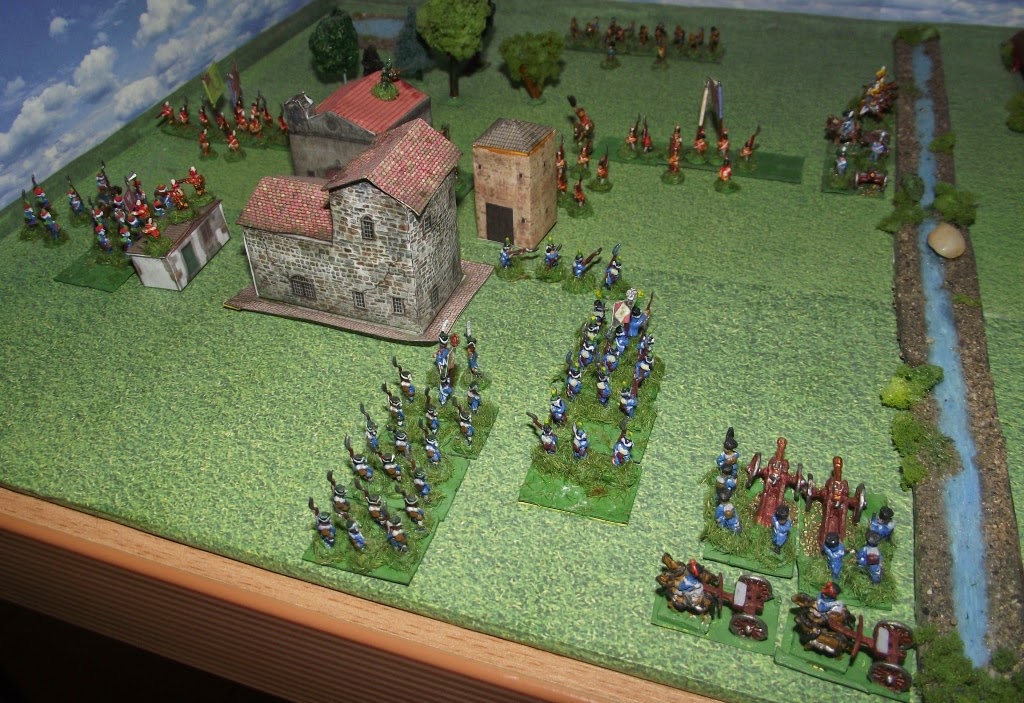 Initial bombardment and some quick infantry action brought me advantage on the right wing.
Things were not looking good on the left. Highlander skirmishers took position in the building and they were able to shoot at the flank of my column. Rifles positioned themselves in the church, while British hussars tried to flank my forces by crossing the creek. 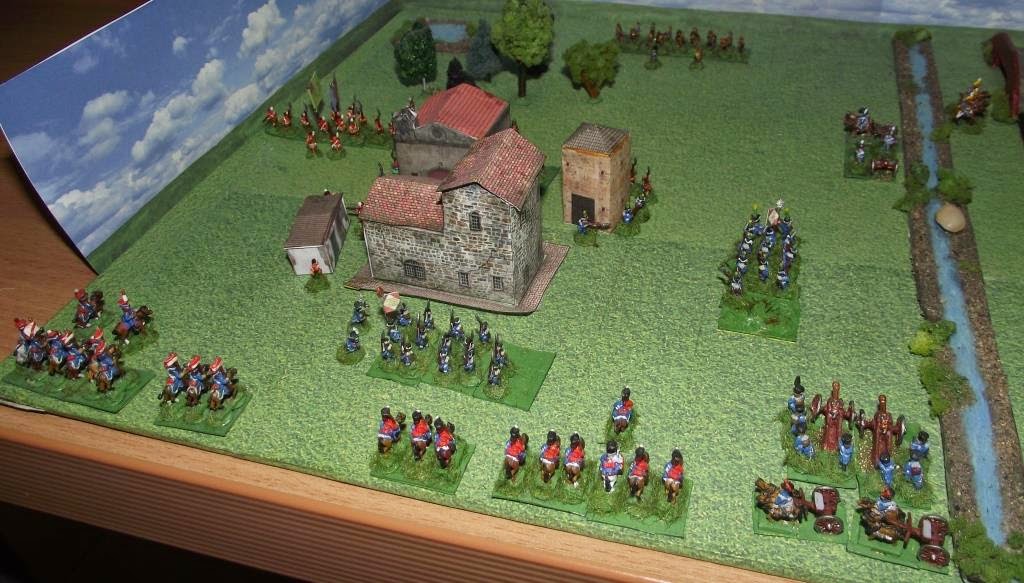 Precise gun shot managed to kill British brigadier, so the unit he was attached to decided to quit the field.
I changed facing of the French line unit that was idle during the first turn (another bad deployment) and send it to help Poles. But Highlander skirmishers were hot, they reacted to the new threat and made my French line unit disordered!
Fire from the Highlander line reduced 1st Vistula legion under 1/4 strength, so they also decided to go home, taking brigadier with them. As reaction, both my remaining units lost some troops and become disordered.
It is obvious that first brigade was in desperate need of all the help it can get, so I decided to send in the cavalry! 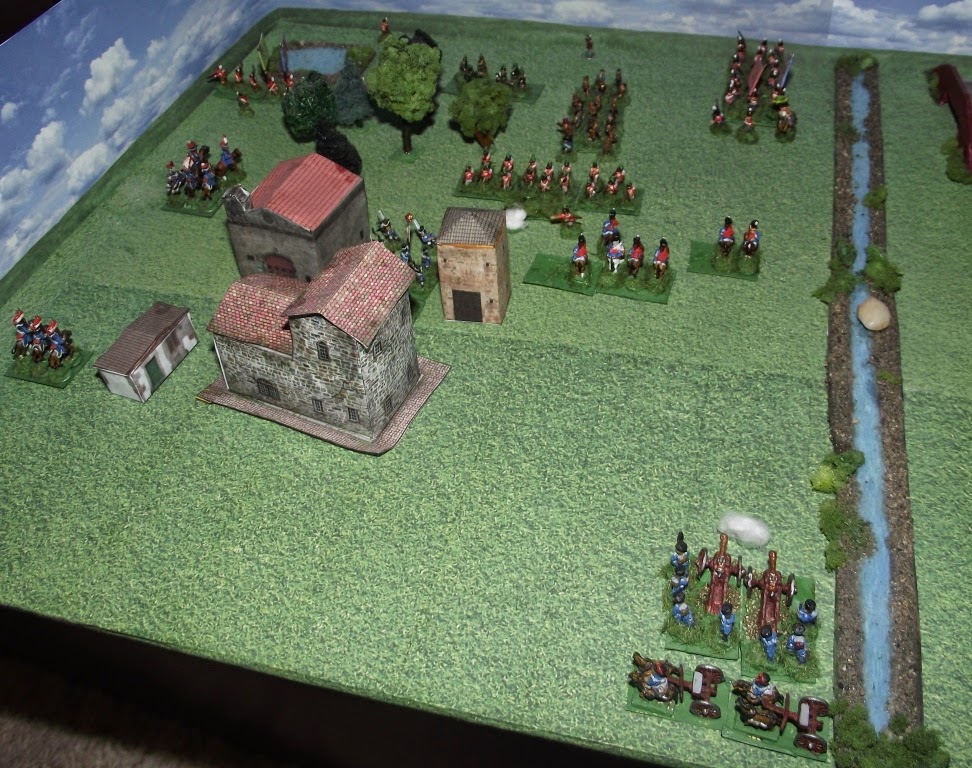 Few turns later, on the left lancers are chasing Highlanders, after suffering heavy casualties from rifle fire. To save them, French line unit decided to perform strange maneuver - they first entered the building, and on the next turn exited it on the other side, disordered. But they are now 2 inches from the rifles, who had to run away and can no longer fire to lancers flank.

On the right, British reserves are gathering. So, it is probably time to send my own reserve into action.

To be continued....
Posted by Aleksandar Šaranac at 10:30 AM