While my napoleonic battle still rages on turn by turn on my gaming table, I decided to do a change of pace and try Ancient Battlelines Clash rules by Shaun Travers. Rules are free and can be downloaded on this link.

While rules are written with ancients wargaming in mind, they can double for low magic (actually NO magic) fantasy, so I played a game of Orc Vs. Dwarf/Human alliance, using 10mm figures from Copplestone Castings.

The stories of the precious metals in the mountains of Orcland were well known to all dwarfs. But they never dared to cross into Orcland alone. But once they connected with humans, who always needed new places to settle and expand their kingdom, the attack on the Orcs who were minding their own business was immanent. But Orcs were ready.

For the first game I decided to play pitched battle, with no terrain.
I deployed first, and than the solo system coming with the rules deployed alliance troops. This was done very smart, by positioning light units against my Trolls, who have disadvantage against them. 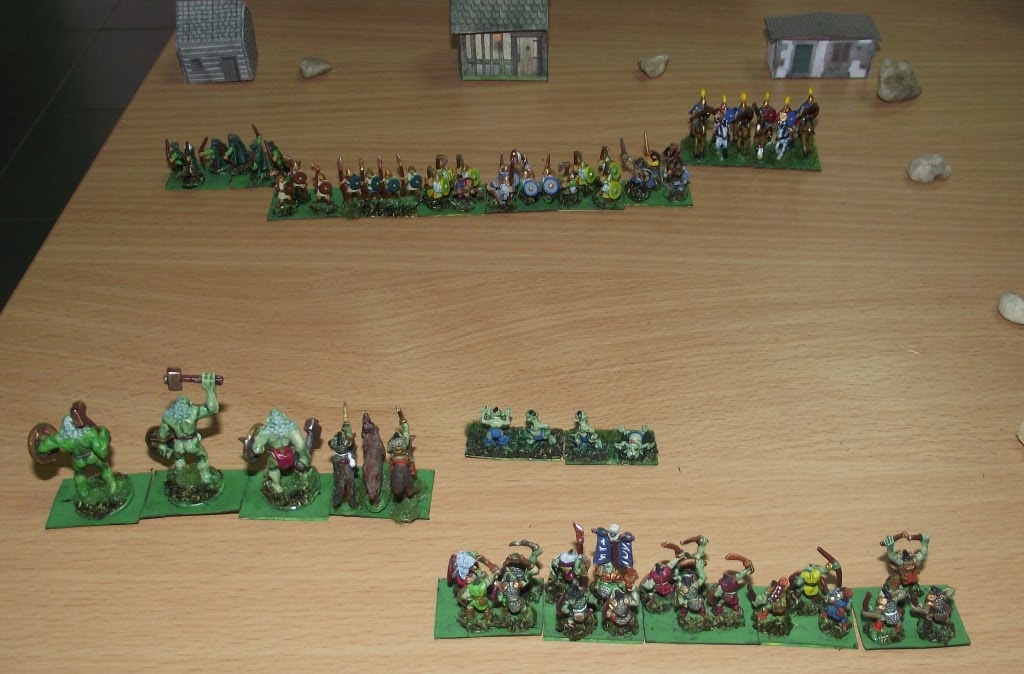 Alliance army selected Break through center tactics, so they moved fast forward, with front line of troops soon reaching proximity zone of my gremlin skirmishers, who fired and retreated. Most of the enemy line (except barbarians) reacted to fire by moving half they move allowance. This again, brought the line in proximity zone of my cavalry. One troll and wolf riders charged, while two trolls decided to stay in place, probably arguing with each other.... 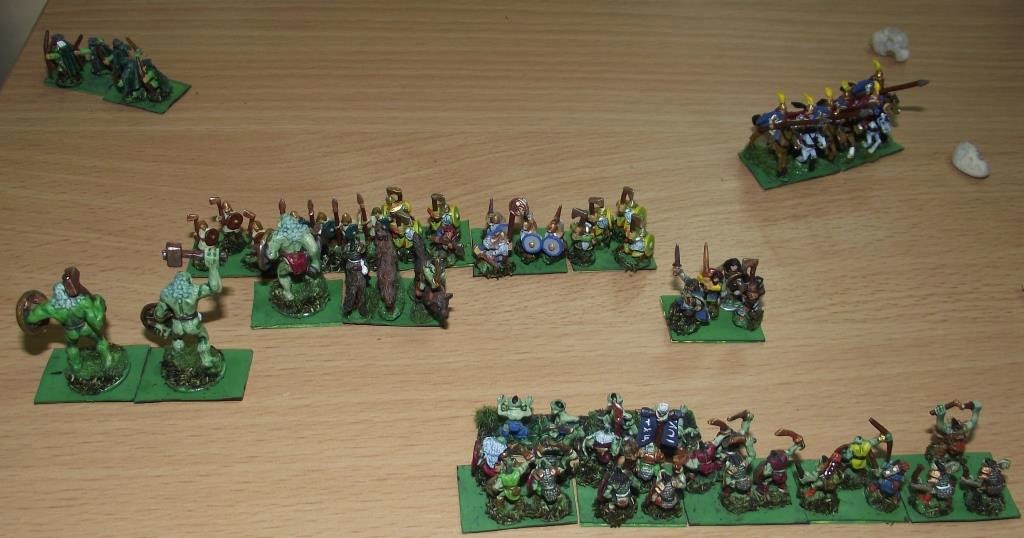 In melee that occurred, troll destroyed city guard unit, but settlers replaced them and sent troll running, disordered. Wolf riders clashed into shields of dwarf woodcutters, that left both units disordered.
More to my right, barbarians left the attacking line and rushed forward, coming again into proximity of one skirmisher. It all ended with gremlins retreating disordered behind the orc line and barbarians charging orc warband. Orcs counter charged, and it resulted in both units being disordered.

On the Alliance left wing, riders reached proximity of archers, who fired, missed, and allowed riders to charge home. The first rider unit got stuck in melee with archers (both units disordered), but second rooted my light infantry and then started pursuing them off the table, never to return (I hoped for this, since riders are superior troops than archers. This was the reasons I decided to wait for enemy to come close, instead of meeting them in the middle of the field) 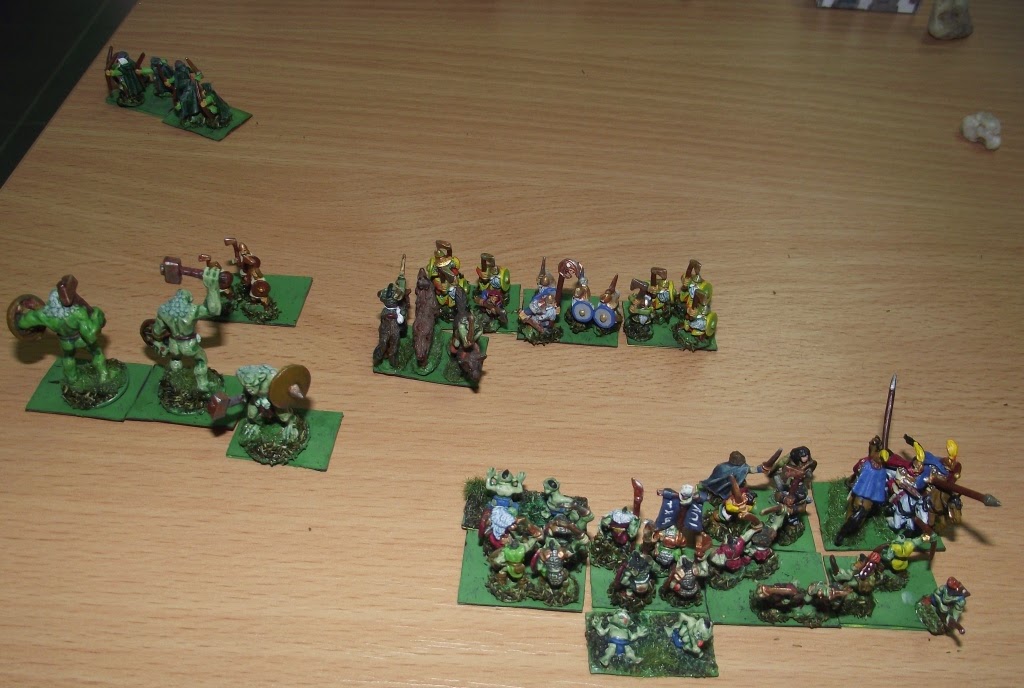 All this happened until the middle of the turn 2!
It was my turn, and I was starting from the right. Archers and riders stayed in combat, as well as barbarians with orc warband. But then orc general wheeled into combat, destroying barbarians and being forced to pursue.
Gremlins moved into firing range, and wolf riders continued melee with woodcutters. On the left, impetuous trolls charged settlers, but this was not good move since they couldn't get better result than all disordered. 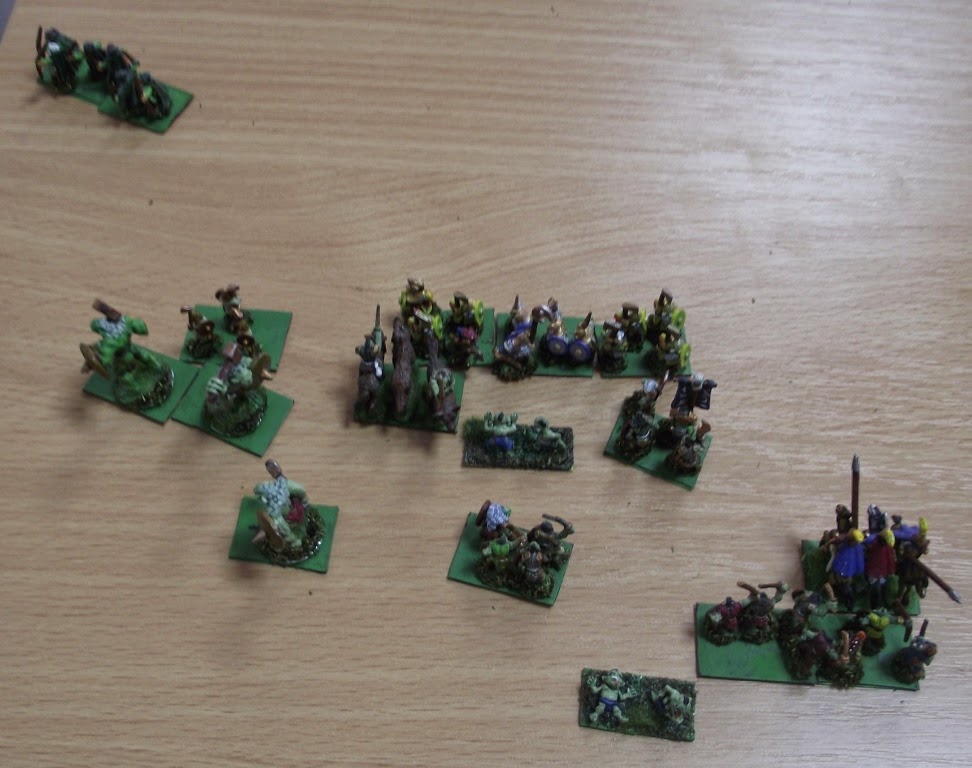 Human rangers finally arrived into firing range, but too late. Settlers rooted one troll, but the other kept menacing them. Woodcutters and wolf riders kept fighting with no result. Dwarfs decided to split the line. Second unit of woodcutters charged Orc general, and dwarf general rooted gremlins and then joined the charge on orc spears. Melee resulted in woodcutters being destroyed, but orc general being forced to retreat, disordered. Little luck for me here, since dwarf general rolled 1, and was unable to pursue.
On the left, riders finally broke my archers and pursued them off the table. With riders out of the picture, alliance moved over the army breakpoint, and therefore Orcs have won the day and saved their homeland from nasty invaders.

All in all, Ancient Battlelines Clash is a great game. It plays quickly (all was over in 2,5 turns) and the game was fun. Programed opponent for solo games is well developed, and can be used even in other similar games, like RRtK. I will have to test more of it, next time with board little more crowded, and maybe with some scenario from One Hour Wargames book.
Posted by Aleksandar Šaranac at 2:59 PM