The main problem I have with the two producers of 6mm napoleonic armies I use is their opinion about necessity of NCOs in the army.

While Baccus never even tried to produce NCOs, Adler is making figures armed with  halberds, claiming that NCOs armed with muskets were dressed the same way as the ordinary troopers. The problem with that claim is in the fact that during marches (and marching pose takes 80% of 6mm army), NCOs held musket under right arm, while troopers under left. This is a feature visible even in 6mm.

To overcome this problem I am usually doing conversions. The easiest way is to convert spare eagle bearer into NCO, by cutting eagle and painting remaining part of the pole as musket, with some simple bending to create bayonet.

But recently I started painting unit of Polish foot by Adler. The eagle bearer from the Polish command strip is made in a really nice and unusual pose, but this makes it impossible to convert it into NCO. 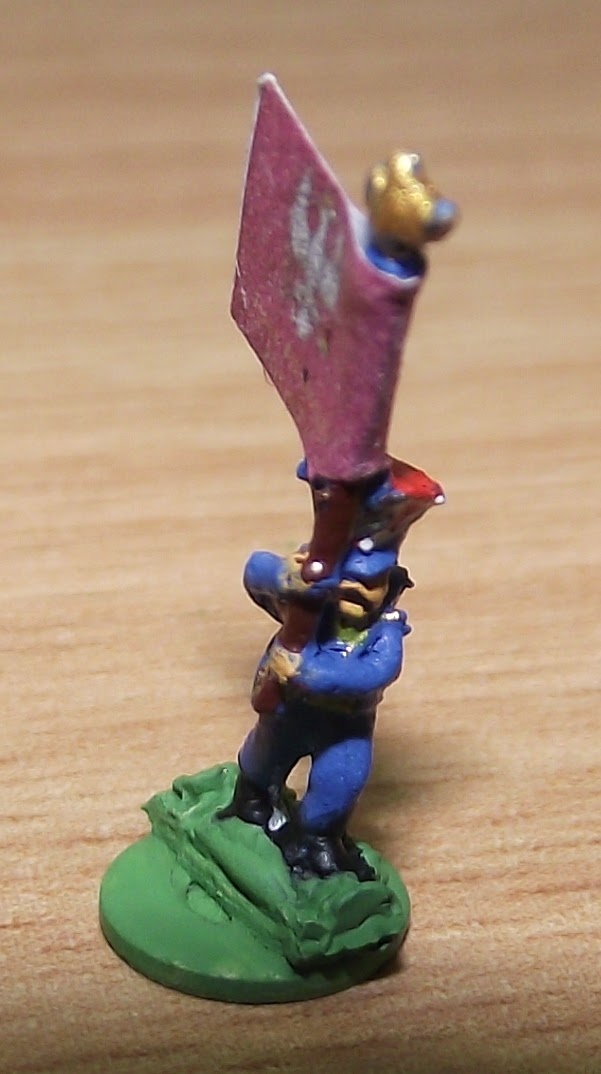 Then, I noticed drummer from the same strip. It's right hand is raised to the lips to use whistle, while his left hand rests on the drum. Right hand has some molding problem, so on all models I have there is a small gap between arm and whistle. Thanks to that, this arm can be slightly bend into lower position, good to transform it into musket holding hand.
So, I cut off the drum and whistle, changed position of the right arm and glued musket taken from ordinary trooper.

The result is quite satisfactory, especially on the tabletop.

Next picture shows original drummer and one transformed into NCO side by side.

Posted by Aleksandar Šaranac at 11:49 AM