Dungeons of the Undercity

Recently I purchased a solo playable setting called Ruins of the Undercity,  by Kabuki Kaiser.

It is basically set of random tables with goal to send your character(s) into dungeon crawling quest.
The book is supposed to be used with Labyrinth Lord rules, but it can be easily adjusted for everything else, so I decided to test D&D 5th with it (OK, and using LL here and there).

As soon he arrived to the city, Loneflute looked for the first entrance to the underground and went directly into dungeon.
After some wandering through empty corridors leading north and then west, bard entered a 30x30' chamber with a statue in the corner. There he was attacked by two bats. Bats were flying, so he had disadvantage against them. Finally, Loneflute killed both bats, but he lost 2 HP. On the ground, half-elf found 375 ep and a jet gem.
Bard checked the statue, but there was nothing special about it. 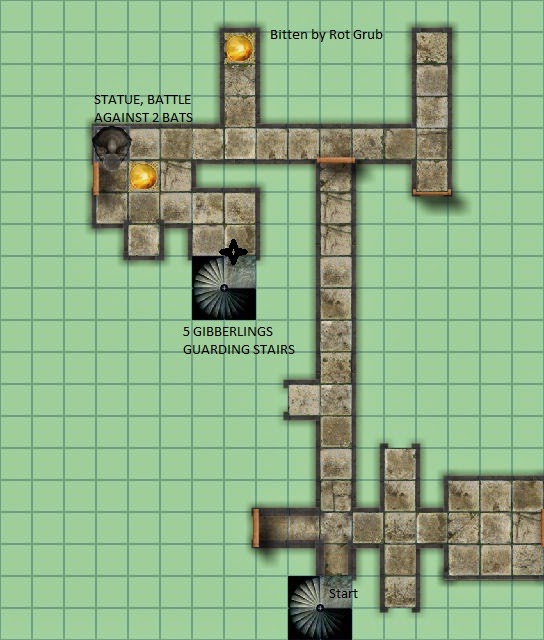 Room had 3 exits. One was closed by door, one was a dead end, and one was leading to a smaller chamber. 5 gibberlings were guarding the stairs down. Loneflute retreated before they could see him, avoiding the contact with the more numerous enemy.
Bard checked the corridor leading north, but it quickly ended. Furthermore, he was attacked by Rot Grub, nasty little parasite that enters a living body and kills the host if the bite location is not immediately treated by fire. Loneflute performs the treatment and loses 5HP in the process. So, he takes a short rest to heal rolling his HD, and restores to full health.
Then, the bard goes to check the corridor leading east into T shape. But T shape had dead end to the north and a door to the south, so my hero decided to return to the city, take prolonged rest and maybe hire some henchmen, considering the fact that these dungeons are dense populated even so close to the surface.

As first impression, Ruins of the Undercity is a product full of tables. Some are really useful, and some just add flavor, and can be omitted during solo play. Once you learn which table to roll on, and which to skip, using this tool can be quick and really fun.
Posted by Aleksandar Šaranac at 2:21 PM