Card Quest is a simple dungeon crawl card game. I decided to play campaign, and therefore I will start with 3 heroes, having in mind that this is game where characters die. 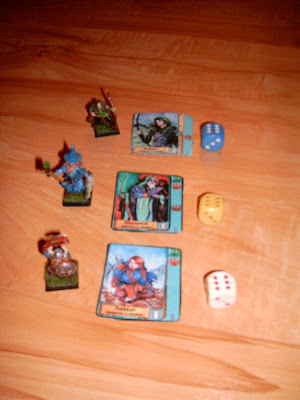 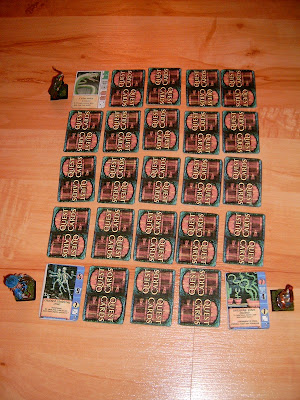 Trying to scale the outer walls of the mansion, Hadrad the dwarf got entangled into grasping wines. He was not surprised, but he failed to remove the wines in first try, and got hindered, therefore he will have -1 to next roll. Trying again he rolled 10, and this was enough even with penalty. He moves on, but with only 5 health points.
Vullesar entered through cellar and run into cellar snake. He was swift enough to ambush the snake and eliminate it with precise arrow. Below the snake's body, rolling lucky double 6, elf found level 13 item Unicorn Horn and became level 2 ranger.
Ganimed entered through main door, guarded with chained skeletons. Illusionist detected this trap on time, and removed it without problems. 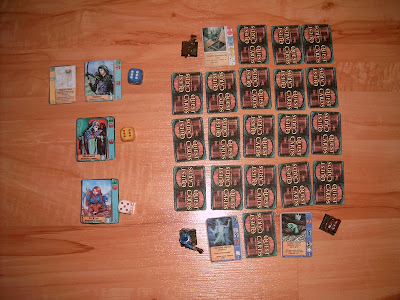 Finding himself in the back yard, Hadrad's eye of a trekker detected some hazardous Loose Earth ahead (natural 12 surprise roll). This quick observation moved him up one level, which made him forget his old wound. Being level 2 trekker also made it easy for him to remove this hazard and earn 2 quest points.
Elf ranger also made good use of his eyes. He detected Hidden Passageway that took him to the private part of the house.
Ganimed encountered the toughest opposition this turn. Entering the main hall, he was surprised by Cackling Ghost. Lucky for him, human was able to use magic and make himself invisible (ambush roll failed, but landed inside re-roll zone). Illusionist's next attack hit the ghost, but the dying monster was able to strike back. Ganimed received one more lucky break: being invisible, he was not easy to hit, so the ghost's last attack went wide. 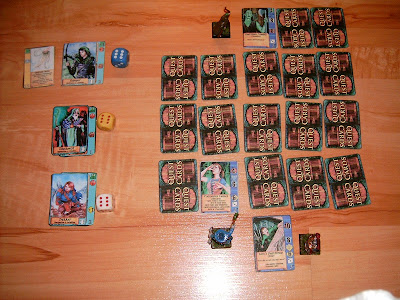 Upon entering the building, dwarf stepped into Mox's Deathtrap. He was not expecting it, so he felled into the trap and lost one health point. Trekker noticed the small repair door in the side of the trap so he used it, leaving the deathtrap active, a risk for some poor soul who will pass this way in the future.
Entering deeper into mansion, Illusionist detected a field of Poisonous fumes. He was trying to remove this hazard, when the cloud reached him, and he lost one health point. Then the blow of magic wind dispersed the fumes, and Ganimed moved on.
Walking through the narrow passageway, elf came to the door guarded by a Zombie. Ranger's arrow hit first, but it was not enough for such a tough opponent. Zombie's hellebard found it's target twice, until Vullesar managed to fire enough arrows to dispose of the undead. Elf moved on, with 4 health points left. 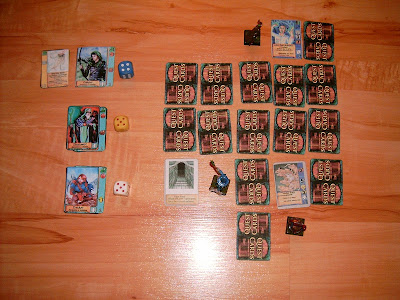 Ganimed had passed only few steps when the passageway he took ended in front of the open tomb. Illusionist earned a quest point, but he will have to retrace his steps. And just as he returned all the way to the front door, he noticed a flaming arrow piercing the sky.
Tunnel the dwarf took lead straight to cellar. Jumping out of it, trekker surprised a pack of cellar rats. Pack leader tried to attack back targeting Hadrad's leg, but his bite was not strong enough to penetrate dwarf's boot. Few precise axe blows later, rats were history. And as he was coming out of the cellar, trekker noticed a flaming arrow passing above his head.
For behind the Zombie guarded door, ranger found the necromancer himself. Mox was involved in some strange ritual and it seemed that he has not seen the elf. Vullesar decided to take no risks: first arrow stroke necromancer's back. Mox managed only to turn to face his executor, so the next two arrows hit him in the chest. He crumbled to the ground, dead. The mission was over. Elf approached the window, lit one arrow, and fired it into the sky.

Adventurers rested in the nearby village. Grateful locals awarded them with 2 level 12 items of their choice (6QP worth + 1QP wasted). Ranger already has his Unicorn Horn, so he left the choice to his friends. Therefore, illusionist selected Pipe of Warmth and trekker Battle Worn Shield, and these are the items my heroes will take into next adventure.
Posted by Aleksandar Šaranac at 9:58 PM