This is a battle report from the WFB duel my Tomb Kings had with Ogre Kingdoms army last Friday. We are still playing according to 7th edition rules, both armies are 2250 points.
From the diary of Liche priest Catullus:
As soon as scouts informed us about Ogre raiding party approaching our lands, looking for easy loot, Queen Sappho ordered me to rise the army. She wanted to stop the treat as soon as possible, so we deployed our forces near the oasis and ruined trade outpost of Astapovo. Ogres did not let us wait long. 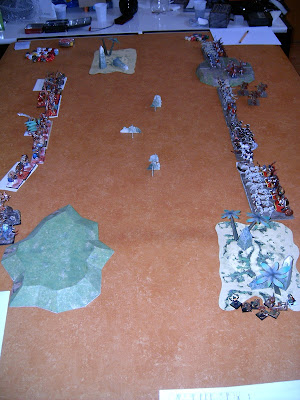 It seams that the main battle will develop around the outpost ruins, so the Tomb guard unit led by Queen herself hurried in that direction, supported by 3 Ushabti statues.
Left wing is under the command of prince Holderlin riding in the mist of his charioteer guards. He noticed Ogre scrap launcher and slave giant hiding behind the hill, and therefore ordered Bone giant and Tomb scorpion towards them. On the way, scorpion run into unit of gnoblar trappers hiding in the woods. It charged and the trappers fled the battlefield. First victory is ours, no matter how small.
Right wing is mine. I have a Skull Catapult, unit of archers led by liche priest Ovid, and light cavalry and carrions for immediate protection. Another unit of chariots waits in reserve, planing flank attack from the right.Catapult just fired, killing one Irongut and wounding another. First stage of the battle belongs to us! 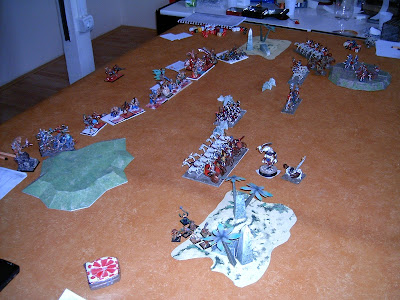 Troubles are starting! One of the Buchrers caste regeneration on Ironguts unit, and somehow I am unable to dispell it. Queen and her guard are locked in combat with them now, and have problems striking a wound!
Further more, catapult is stuck and refuses to fire.
Less alarming developments: Light cavalry and carrions stopped the advance of gnoblar horde. Only problem is that this fight is being fought at the bad position for second unit of chariots, that cannot join the fight.Ushabti connected with the second unit of Ironguts, led by their general Njam-njam. They have small chances to win the fight, but at least they will slow the Tyrant.
On the left wing, two giants are locked in combat. Scorpion is near to help, but so is the Scrap Launcher. A battle of monsters!And finally something good. Prince Holderlin hit simultaneously unit of ogre bulls and leadbalchers. He did lost 3 chariots from his unit, but the enemy is broken! 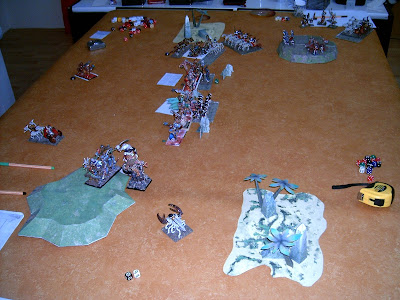 Problems continue. I am still unable to dispell regeneration spell on Ironguts. Also, catapult is still jammed, and while trying to repair it, I have lost one crew member. General's Njam-njam unit killed all Ushabtis and is moving towards queen's guard.
On the right, sheer number of gnoblars is taking down one horsemen after another.
Some good news on the left: Slave giant is down, and our monsters are swarming around scrap launcher. 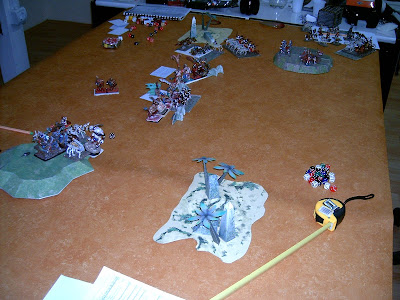 Battle luck is changing sides each minute. Ogre champion killed Tomb guard in challenge, but then queen challenged him and killed him quickly. Then, general Njam-njam left Ironguters unit and charged Tomb guards from the flank, and this was enough to destroy the unit. Finaly, even queen fell, her body broken in challenge duel with Tyrant.
Reserve unit of chariots finally managed to attack Irongutters the general left, and destroyed them.
On the right, gnoblars killed all riders and all carrions.
But then, trying to heal himself, one Butcher misspelled and exploded. The other one, left alone, was easy target for our incantations of vengeance.
On the left, our monsters just killed scrap launcher.
And the ogres are retreating!
Not a glorious victory for us, but I do not think they will be coming back! Queen's body is broken, but nothing that few years in a tomb can't solve. 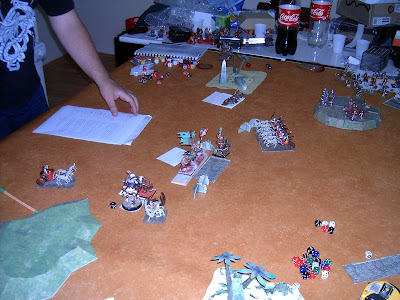