Ambushed by the dwarfs

Here is the report form another test game of my Lone Blade solo rules for Song of Blades and Heroes.
This time, I played using base Revisited SBH rules.

Orcs are played by human player (me). They start in the South West corner and their only goal is to get out of the table through the North East one.
Dwarfs, played by AI are preparing ambush among the ruins. They have 3 elite warriors deployed in NW corner, 4 young warriors in the SE, while exit was covered by dwarf thief and orcslayer (ouch). 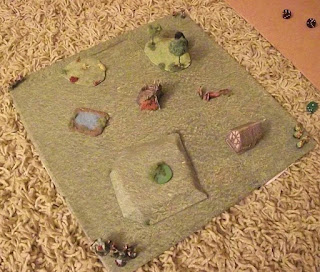 To compensate for the killer, orcs took a troll with them. 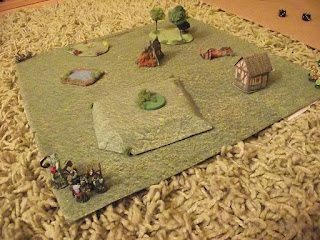 Orcs made a run for NE corner, but some of them were intercepted by Elite dwarf warriors. Slow moving Troll tagged behind. 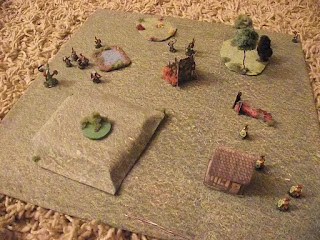 In order not to provoke orcslayer, orcs to the front turned right, south of the forest to engage young warriors. Troll managed to join the brawl and score the first kill against elite warrior. 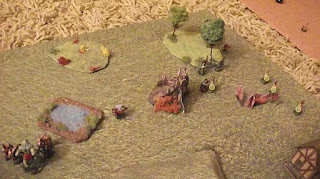 Lone Blade solo system is not meant to simulate human opponent. It plays and feels differently, and so the tactics should be adjusted. On the picture below we see orc leader getting ready to return towards Troll and try to kill a dwarf in melee with him. In Lone Blade figures within 1 medium of the enemy will act before figures in melee, so orc soldiers to the right should take some burden, allowing leader to clean the situation to the left.... 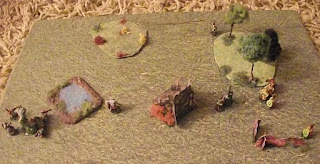 ..unless of course leader rolls 3 failures, and that is exactly what happened. It allowed all dwarfs to activate, and what is even worst, elite dwarf warrior scored gruesome kill against the prone orc. Troll failed morale check, and being close to the edge quit the field. 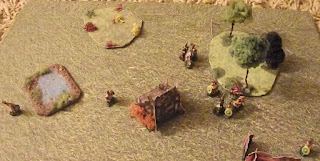 This was beginning of the end. Orcslayer reached Orc Leader and killed him in fair duel. A major victory for the dwarfs and for the Lone Blade AI system.
Posted by Aleksandar Šaranac at 9:32 PM