Dragon Rampant is a relatively new set of rules written by Daniel Mersey and published by Osprey. It is fantasy version of the older Lion Rampant rules.

After reading the rules, I was certain that I will like the game, considering that it uses the same mechanics as Song of Blades and Heroes system - you roll for activation of every unit, but if activation fails you suffer turnover - your turn ends and opponent gets the initiative. Dragon Rampant is something in the line of SBH bigger battles and this is good.

For my first solo game, I decided to go with my usual suspects 10mm humans Vs. Orcs by Copplestone castings.
Orcs commanded by me had 5 units - Heavy spears with general, Orc horde (Bellicose), heavy wolf riders, archers and reduced unit of trolls (elite foot).

Humans had unit of levelheaded knights with general, unit of elite foot warriors,  unit of sharpshooters and unit of light spears. Having in mind similarity between this game and SBH, I decided to use for enemy activation Opportunity/Trouble system from SBH Solo by Mats Lintonsson.
After that, I will move the activated units in the best possible way, until I play enough games to be able to write micro AIs in the way suggested by Mats. 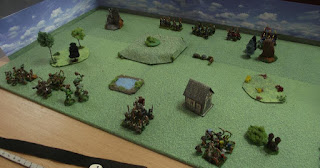 Starting position. I deployed my orcs first. For humans, I decided the position of each unit by dividing table edge into 6 parts and then rolling d6 to see where will each unit start. I got 3,4,4,5. Humans positioned itself in the center.

This is photo from the middle of the game. Orc side was devastated by some terrible rolls, and things do not look good for me. Orc mob is already destroyed, general is battered while my units on the left wing stay where they are, unable to activate. 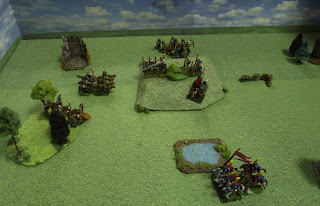 Human elite foot first destroyed my general and then the trolls. With only two units remaining on the table, and enemy approaching, I decided to retreat.

Dragon Rampant (as well as the Lion Rampant before it) is a really good game. Activation mechanics makes it also very suitable for solo play.
There are also some interesting looking scenarios mentioned in the book, so for the next game I will definitely try one of them.

Posted by Aleksandar Šaranac at 11:48 AM