Last week, I was on a business trip to Plovdiv Bulgaria. By the luck of the chance, my hotel was just across the street from recently opened gaming club called Level Up. So I dropped by after work to say hi.

As the evening was early, I suggested a game of Microscope RPG. 4 players participated, including myself. We decided to play a history of life on the planet, from first to last living cell. As important part of the pallet, we decided that there will be no intelligent beings, so no artificially created cataclysms. Life has to die on the planet due to natural causes.

At the beginning of history, cells started multiplying until one cell give birth to two genetically strange offspring - one red and one blue. Children of those cells will later become red and blue worms. Somebody mentioned that Red Worms dominated first period of existence. Someone else decided that Blue Worms live in the water.

There were other creatures, like  Slugs, Jellyfishes and Birds. We had important scene where we asked question how did the Birds become extincted.  During the scene we discovered that Red Worms live in lava, and that same lava is a food source for Birds. As the planet got colder, there was no more lava pools on the surface, and water filled empty spaces. Birds had no food and they died off.
Also, Red Worms had nowhere to live, so Red Worms dominated period ended and Blue Worms dominated period began.

But the similar thing that happen with lava now happened with water. Lack of water on the surface forced Blue Worms to become smaller and smaller, and at the end they were living as parasites inside the Jellyfishes, whose belly was the last remaining wet environment on the planet surface. Unfortunately, the symbioses was not perfect, Blue Worms were eating Jellyfishes from the inside, parasites soon killed their hosts and they killed themselves the same way, ending the life on the planet. 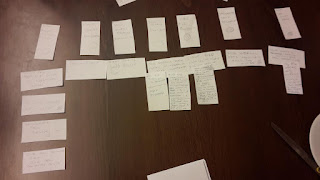 Players struggled with rolleplaying in scenes due to the strange nature of possible characters, so most of the the scenes ended up being dictated, but all in all it was a fun game and it went well considering that 3 players were completely new to Microscope.

Later in the evening we also played some Takenoko and a shot of Betrayal at the House on the Hill (great game, one I am going to purchase to run for my home group at Jatacenje convention in January).

Great time all in all. Level Up is a must if you go to Bulgaria.
Posted by Aleksandar Šaranac at 8:24 AM