I finally decided to try 5 Core (second edition) from Nordic Weasel Games. And, unfortunately, I have to confirm what other people already stated on the web - 5 Core is the best SF/modern skirmish game available on the internet. Didn't expect this to happen - but I am totally hooked :)

For my first game I decided to start easy. There are many ways to customize your character in this game, but I just took 6 grunts per side and went with it. I played orks (2 teams of 3 soldiers, with normal grunts armed with sub-machine guns, and support consisting of one auto rifle and one grenade launcher) while automated side consisted of space marines armed with infantry rifles and supported with 2 auto rifles.

Terrain is set as per Control the river scenario from One-Hour Wargames book, I just added more terrain peaces on both side of the river since 5 Core asks for dense covered table.
Game was played on 1"x1" table using GW Epic 6mm orks and marines and 1'=3' ruler. 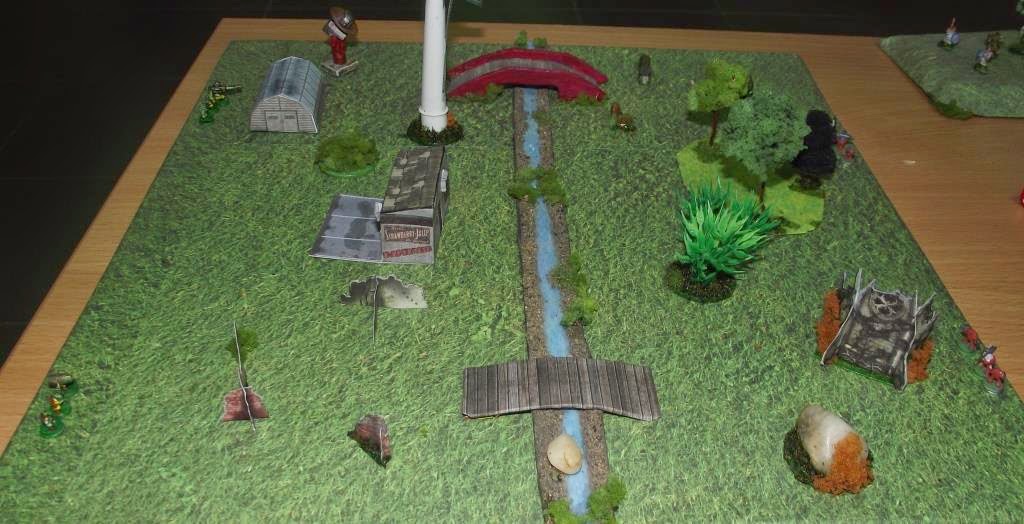 Due to the nature of the scenario game evolved as two independent 3 men skirmishes.
Marines rolled for behavior and got Aggression level 6 - very aggressive, and their priorities were to advance on enemy positions. 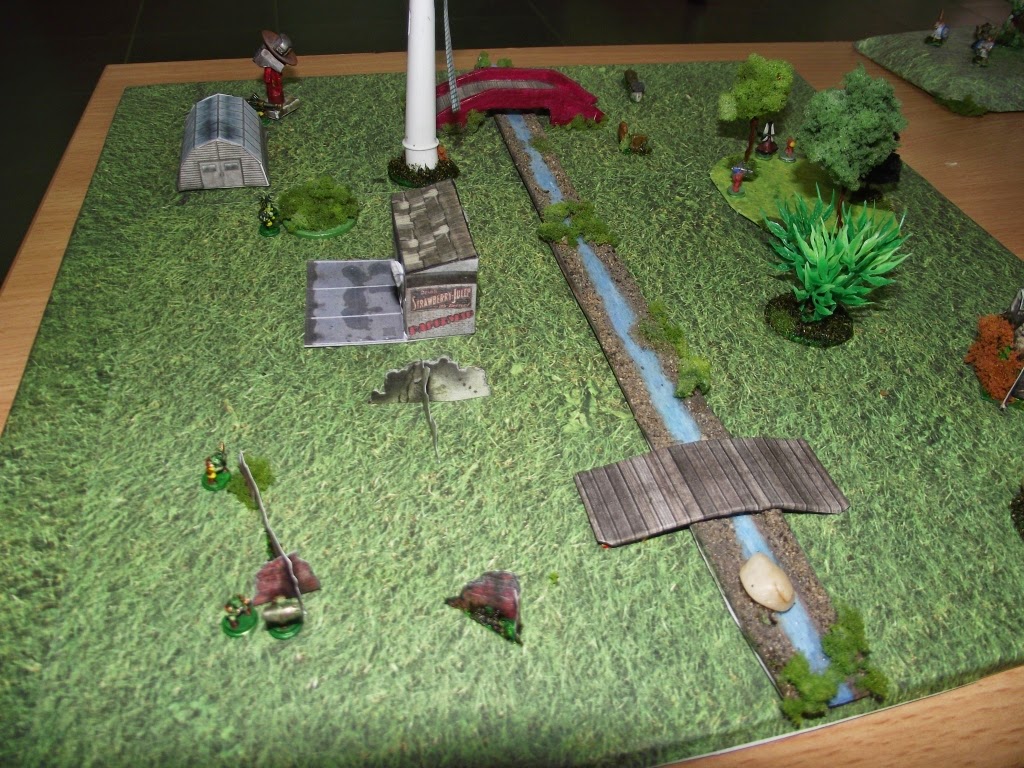 Game started with some scurry actions. Troops approached the bridges while soldiers with auto rifles from both sides selected good position to rain support fire on enemies. 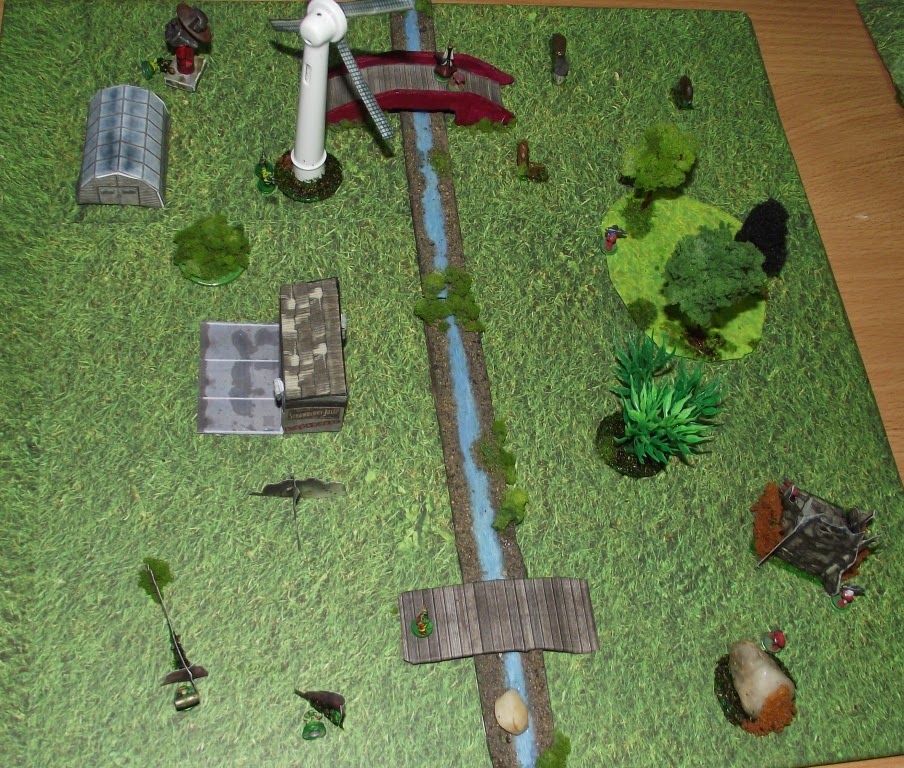 To the south, two orks tried to storm the bridge but were soon returned to their side of the river by marine fire.
Marines tried to do the same on the north, but they fared even worst - one marine got out of fight and one bailed. 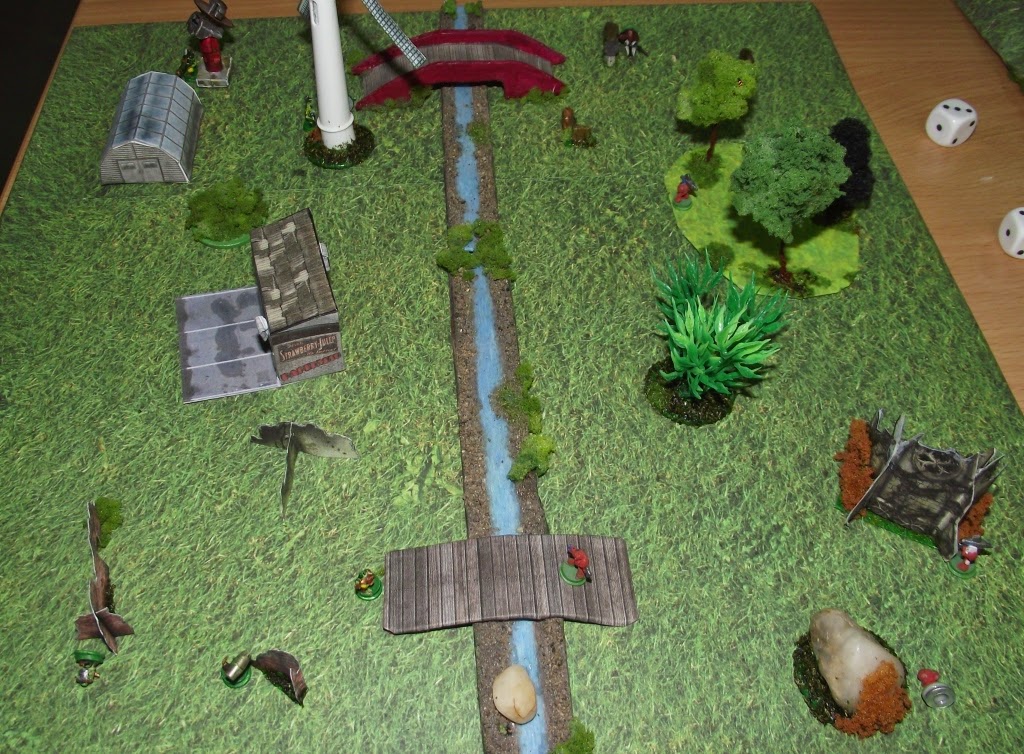 Covered by support fire from auto rifle, one brave ork dashed across the bridge, engaged bailed marine in close combat and killed him. Later the same turn he got some unwanted attention from marine auto rife and had to bail out of table, but he already did his job.
To the south, two well placed shots from grenade launcher killed two marines (one with auto rifle).
Outnumbered 5 models to 2, marines decided to quit the field. It was middle of the turn 9. 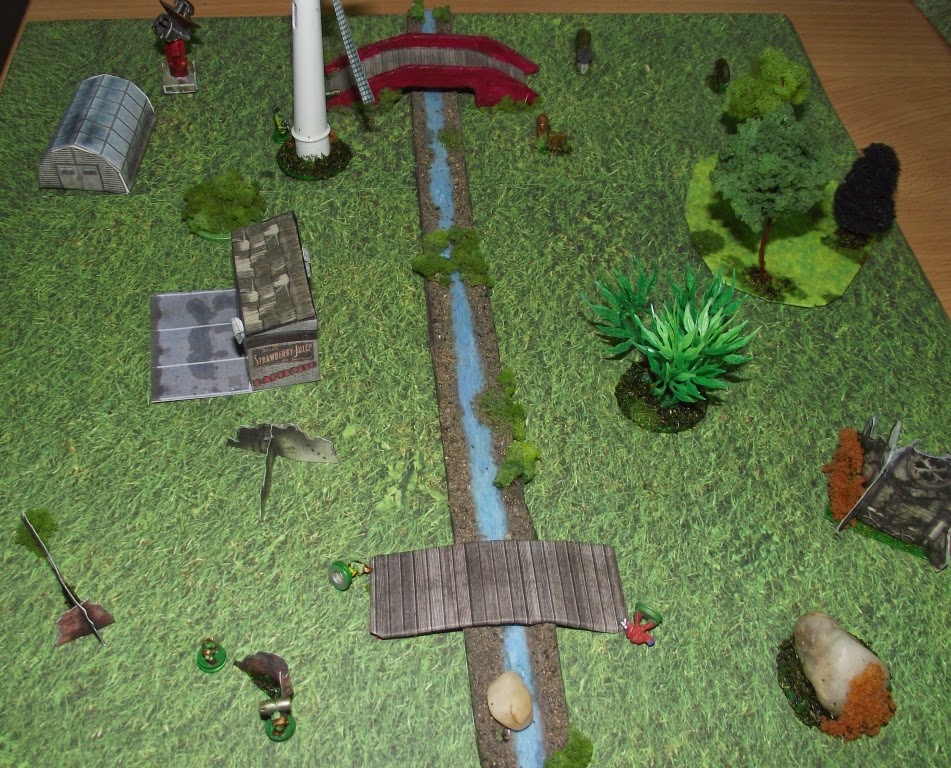 At the end, higher firepower of sub-machine guns proved dominant in this scenario over long range of infantry rifles, since both sides needed to get into open at short range in order to control the bridges.

This was incredibly fun game, and I can't wait to try it again. The very important for the overall impression is the fact that all your actions are very logical. You should know what you want to achieve in every turn, so you can decide what you gain if you take a risk and is it worth it, and based on this you make your choices.
But you really have to play this game and feel it - I never expected this just from reading the book. So go ahead, and try 5 core.
Posted by Aleksandar Šaranac at 3:28 PM