It has been a long time since I did some wargaming, and I really wanted to play something yesterday. Therefore, I decided to playtest new free Gunstorm rules by Spacejacker.

Rules can be downloaded here:
http://tinysolitarysoldiers.blogspot.com.au/p/gunstorm-rules-system.html

I decided to play cops against gangsters game, where I will play the bad guys.
My gang had two veterans, one with the Medic stunt and girl with two guns (Rapid fire stunt), regular Biker and rookie with heavy blaster.
Police force had legendary Inspector with command stunt, veteran special force operative and two rookie street cops with riot gear (armor 7). 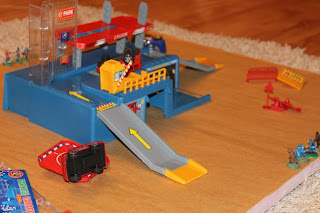 I do not have much urban terrain, so I used my kid’s garage to make a scene.
I had a scenario in mind, but due to the luck of the draw, it turned to be irrelevant.

Inspector’s command stunt, as the only stunt in the crew, allowed cops to win every Fate phase (tap it, then automatically untap, since it is the only stunt) at the beginning of the game and to move very quickly, which is OK, since it all looked like organized action by police.

So, all my gangsters could do was to move once, and the police was all over them. Girl and Biker tried to shoot them as their approached, but all missed. 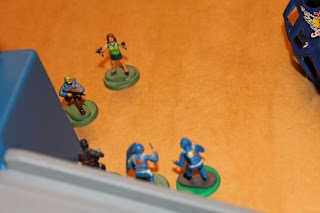 Policemen ganged first on Biker and then on Girl, and send them bleeding out of the game. 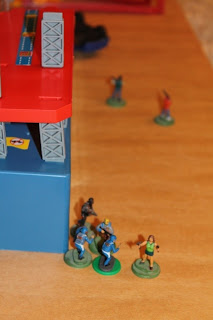 On the other side of the board, inspector charged into Medic, sending him out of fight also. 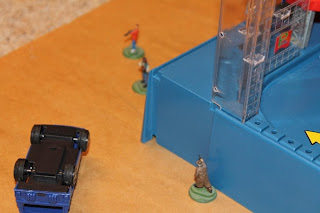 Then, the luck changed. Player shooting phase was next, which allowed my rookie to kill inspector. This nullified command stunt, I won next Fate phase by lucky 6 to 1 roll, used autofire option of heavy blaster and eliminated all remaining cops….

The game was fun, with real cinematic shootout feel. Rules have great potential, although they still need to be worked at (as Spacejacker himself admits on his blog)

Two things I will change next time I play Gunstorm are:
1. I do not like wound resolution done by pulling counter out of the cup.  It can create a situation that all red counters are on the table, and only black in the cup. The player can use it to his advantage in multiple combats, by choosing which to resolve first (I did it in order to win this game). This is not right since all combat actions should be simultaneous. Therefore, I will house rule it that each wound adds +1 to guts statistic, as well as -1 to fighting and shooting. Model is out of fight when its guts become 6+. So rookie goes down after the first wound, regular after second, veteran after third and legend after fourth wound. Furthermore, if the gut check is failed by rolling unmodified 1, model has to take 2 wounds instead of one.

2.With 4 or 5 models on enemy side, I think I will use behavioristic AI model for each enemy soldier, in the way Mats Lintonsson did it in his solo rules for Song of Blades and Heroes game. It should reduce the feel that I am playing both sides simultaneously.

Posted by Aleksandar Šaranac at 1:58 PM