Andrzej Niegolewski: just a day in a life of an officer

This time, I took some miniatures with me on a business trip in order to play my first game of Long Rifle.
In the terms of this game, my hero captain Andrzej Niegolewski is a Rep 5 Star scout/soldier. As Polish officer of the guard he is charismatic but he is also a runt (all the wounds he received so far left him weak in hand to hand combat).
For my first game, I sent good captain into scouting mission through Spanish hills, in the company of veteran voltigeur (rep 5) his little bit greener (rep 4) colleague and inexperienced (rep 3) light infantry chasseur.

I played this game in a hotel, so I used what I have to make terrain - two books under blanket are hills, yellow paper strip is a road, and green area with "trees" is, of course, forest.... 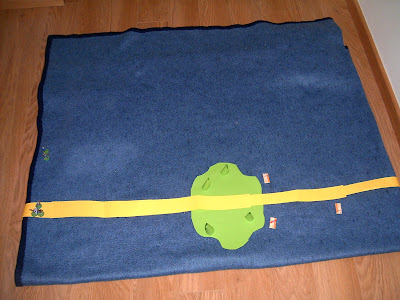 My troupes scouted areas 8 and 9, then moved towards forest, staying on the road. First PEF did not move. Second one hurried through the forest rushing to meet my party. It turned out to be a group of 4 Irish deserters from British army (neutrals, soldiers). The guys just wanted to leave the Spain and go home, so Niegolewski used his charisma, exchanged few words with them and let them pass.
Third PEF also stayed where it was. 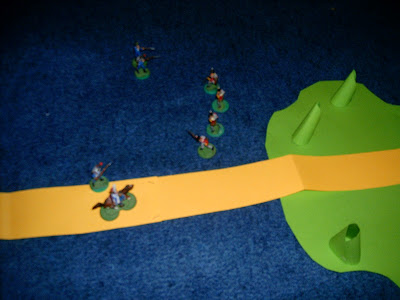 Niegolewski met second PEF inside the forest, but it was just a trail running away from the main road, looking rather fresh, as if someone has recently passed there.
Polish officer sent one voltigeur and chasseur down the trail to investigate, and they have come into line of sight of third and final PEF, who turned out to be another, smaller group of British deserters. As earlier, this encounter passed peacefully. 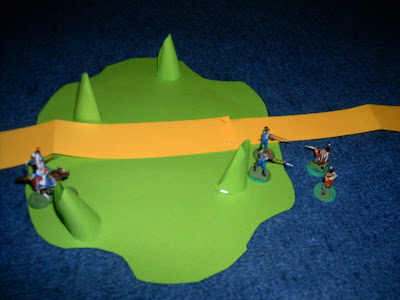 Scouts moved through the rest of the area, and finding nothing, returned to their camp to have some deserved lunch....

Well, this was rather uneventful game, no combat whatsoever. For Andrzej it was just the ordinary day of service, one he quickly forgot. A walk through the forest, so to say.

So, many aspects of the Long Rifle game I'm yet to test. Hope that in the next go I will run into some enemies to try the combat mechanics...

The only reason I noticed this game is because it is my first go on these rules, it is played away from home and all my terrain and miniatures, and because, after all, this is the return of Andrzej Niegolewski to my playing board after rather long absence...
Posted by Aleksandar Šaranac at 8:53 PM