This is a battle report from the Song of blades and heroes game I played with my nephew.
Scenario is EGG HUNT by Bren M. with small modifications.
Each player assembles a three model warband of 150 points. One such model may be a personality costing no more than 75 points. The board should be a maze of forested terrain with as much rubble and the like as one wants. There will be 1.5 markers per the number of players (round up) that are randomly placed within 3 long of the center of the game board. These markers will serve as the approximate location of the Velikimrav nests.When a model ends its movement on a marker, roll two dice (scatter and D6) near the marker. Scatter dice determines the direction of the real nest and the other one determines the measuring sticks used for distance. Distance die: 1-2: two shorts; 3-4: two medium; 5-6: two long. After the exact location of the nest has been determined, place a nest along with 3 Giant Ants (or any creature available). The ants will follow the following rules for activation after all players have had a turn. No number of failures will end the ant's turn.
1. If an egg has been stolen, a guardian ant will roll 3 dice attempting to become adjacent and powerful attack the poacher if possible.
2. If there is an enemy within medium distance from a nest, an ant will roll one die to activate and attempt to move adjacent to the nearest enemy.
3. If an ant was shot with a ranged weapon (or a magical spell), it will roll 2 dice and attempt to become adjacent (attacking if it has remaining actions).
4. If an ant is adjacent to an enemy, it will roll 2 dice trying to get a powerful attack if possible.
5. If an ant is farther than 1 long distance from its nest, it will roll 1 die and move directly towards it (stopping if it hits an enemy model).
6. The ant will do nothing.
Giant Ant: Q3+ C2 Specials: Poison, Big.
A model adjacent to a nest may spend 2 actions to pick up an egg. While carrying it, the model will suffer -1 to its combat score. Each nest holds 1 egg.
Victory condition: pick up more than 50% of eggs and leave table by starting age. If no warband manages to achieve this, victory belongs to Velikimravs. 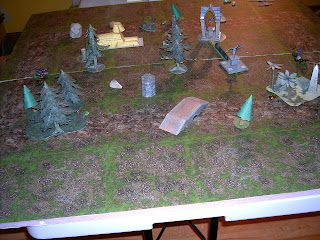 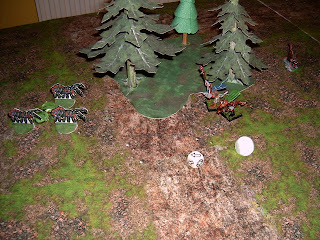 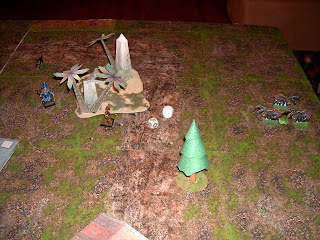 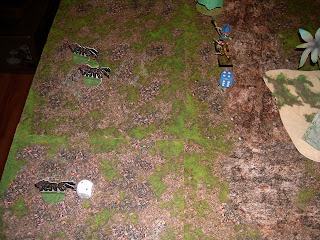 Velikimravs have been shoot at, so they activate with 2 dices. One passes bouth and closes to hunter, other one passes just one and stays 2cm short. 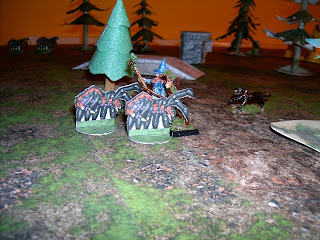 Turn 3:
Shaman moves one medium and casts a spell. One velikimrav fails to resist and it is transfixed. Slayer approaches, attacks transfixed monster and scores gruesome kill. Morale check for remaining two: one passes with 3 dices, but other fails 2 dices and runs off the table edge. Rat moves 2 mediums. 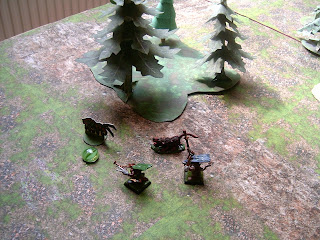 Humans: Wizard casts attacking spell on one velikimrav, but gets bad dice roll – miss. Hunter attacks another velikimrav but gets even result 7 to 7. Dog approaches monster that is threatening wizard.
Velikimravs:
One near the ratmen warband rolls one succes and approaches giant rat.
One adjusent to the dog fails both rolls.
One adjustent to the hunter scores power attack and hunter falls. He is poisoned and becomes Q4.
Turn 4:
Ratmen:
Slayer approaches to velikimrav and attacks. Velikimrav falls.
Shaman approaches the egg, but can not take it yet.
Rat scores power attack on fallen velikimrav ang wins 6:4. Velikimrav is dead.
Human:
Wizard transfix monster near the dog.
Hunter stands up and attacks velikimrav, which falls.
Dog scores power attack on transfixed velikimrav but rolls 1 on monsters 3 to total score of 5:5.
Vellikimrav:
One near the dog scores 2 of 2 to break transfix.
One near hunter scores 1 of 2 and stands up.
Turn 5:
Ratmen:
Shaman passes 3 dices, takes an egg and moves 1 medium.
Ratmen decided that the egg human warband is after is easier gain then the undescovered one, so the Slayer goes in that direction. Rat fails all 3 dices.
Humans:
Wizard casts transfix, but velikimrav resists!
Hunter scores 1 succes and attacks, velikimrav recoils.
Velikimravs:
One monster approaches the hunter, another scores power attack on dog and scores gruesome kill.
Moral check for human warband: Wizard fails one dice and runs 1 medium towards the table edge. Hunter, being poison and seeing his favorite dog dies, decides to call it for a day, fails 3 dices and runs away. This calls for another morale check, since more than 50% of human warband is lost. Wizard fails 2 dices and runs off the table. 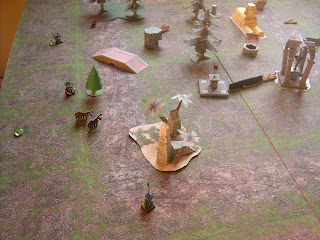 One remaining velikimrav activates with one dice and approaches to Slayer.

Turns 8 to 10:
Slayer picks up the egg, and all models move toward starting table edge. Clear victory for ratmen warband! 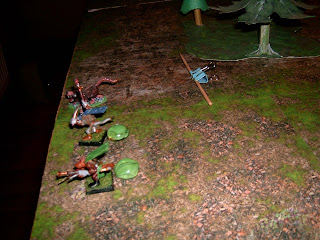 Posted by Aleksandar Šaranac at 1:25 PM

Labels: Song of Blades and Heroes