Geralt was well advised not to enter these monster infested ruins alone. But once he heard that his good friend Triss Merigold went there searching for some herb for her potions, nothing could stop him from following her. It is true, Triss is one of the mightiest wizards in the realm, but when the monsters are around, even the member of The Circle might need a help from a witcher.

This game is set in the world of witchers, created by Polish writer Andrzej Sapkowski. If you are not familiar with the books, you might know this world from the two successful video games of the same name.

The mechanic for the game is taken from Deano C. Ware's book A Fatal Blow. This game is card driven in such a way that it opens great possibilities for solo play, with additional random elements generated by Mythic GM emulator. 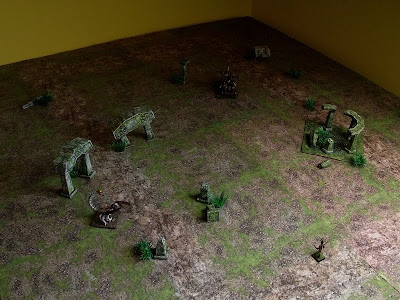 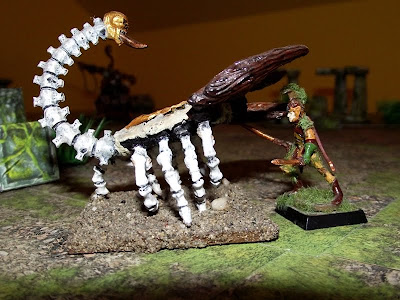 First reviled card belongs to monsters.
Mythic GME: Wil scorpion act upon this card? 99. Extreme no. Abomination will act upon this card, and upon the next one as well.
Since double is rolled, unexpected event also happens. What? Divide suffering. Abomination uses it's first activation to perform a special action. It gives birth to a giant rat (same statistics as Dog in the book)!
New card for rat is added to the deck, so reshuffle is in order!
Monsters get the first card again, so this time abomination moves.
One of the witcher's cards is next, and he moves towards scorpion.
Then, monster's card is drawn again. This time GME decided that scorpion will act.
GME: Will scorpion charge? Extreme yes! Scorpion will charge in this turn, and use next monster card to attack again!
Scorpion has 3 strikes, one of them scored 1, which means that Geralt will have an opening in scorpion's defense if he manages to survive to use it. Remaining 2 strikes scored a hit, but Witcher's armor managed to deflect one of them. The hit that penetrated armor scored 3 wounds, and that is half of Geralt's total number, so our hero will fight under severe penalty from now on! 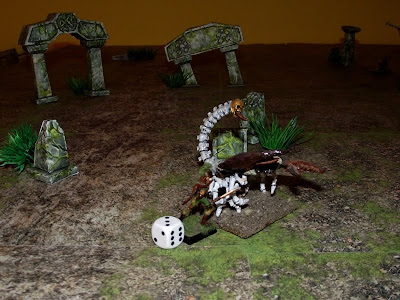 One of the Geralt's cards turned next. With all penalties, he needed 14+ on d20 to score a hit with both katana and knife, and he scored 15 and 18! 2 hits!
Scorpion needed 8+ on d20 to save katana blow, and it rolled natural 8. Then, it needed 7+ to deflect knife attack, and it rolled.......NATURAL 7! More often then not I think my dice are playing jokes on me...
Another witcher's card came out, and Geralt used it to move to monster's side.
Hero is lucky and gets another chance, but both of it's attacks misses!
And the next card is....... Hero card again! Forth in a row!
Geralt attacks, knife misses but his katana hits the target. Scorpion rolls low for the armor, and with side attack Geralt gets the chance to roll 5 d6 for wounds. He scores one 5 and 2 times 6, that makes a total of 5 wounds, just enough to put scorpion out of action!
Scorpion cards are removed from the deck, and cards are reshuffled again. 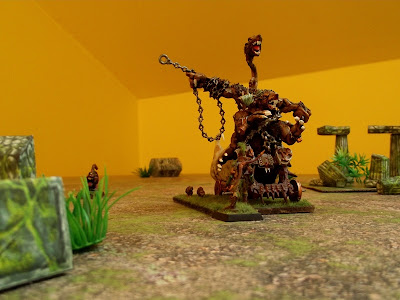 After some movement, Geralt tried to charge abomination but failed. Abomination counter charged, but all it's hit were deflected from witcher's armor. It turned out that fist fighting monster, even size 4 with strength 10, has little chance against well armored hero, and Geralt quickly eliminated abomination. 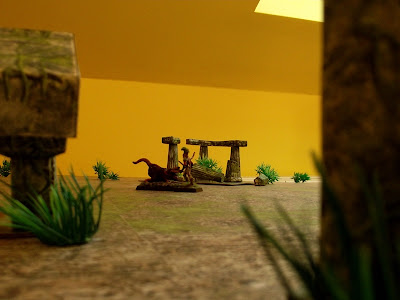 Giant rat, left alone, had no chance against our hero, and was killed with one precise blow.
After the area was secured, Geralt searched the ruins looking for Triss. He found evidence of her presence here, but all signs showed that she took what she needed and left.
Witcher returned to the bodies of the monsters and collected all trophies he could think of. Somewhere in the world there will probably be someone who will pay good money for that....
Posted by Aleksandar Šaranac at 2:35 PM