In the past life, when I was playing with 28mm or 1/72 figures, all my terrain was made of paper, as it can be seen here, here or here. Or elsewhere through the blog :)
One of the things I learned when I moved to 6mm figures was the pleasure of scratch-building terrain. Here you can see some trees with various canopy shapes, sizes and  colors (I have to make more of them) 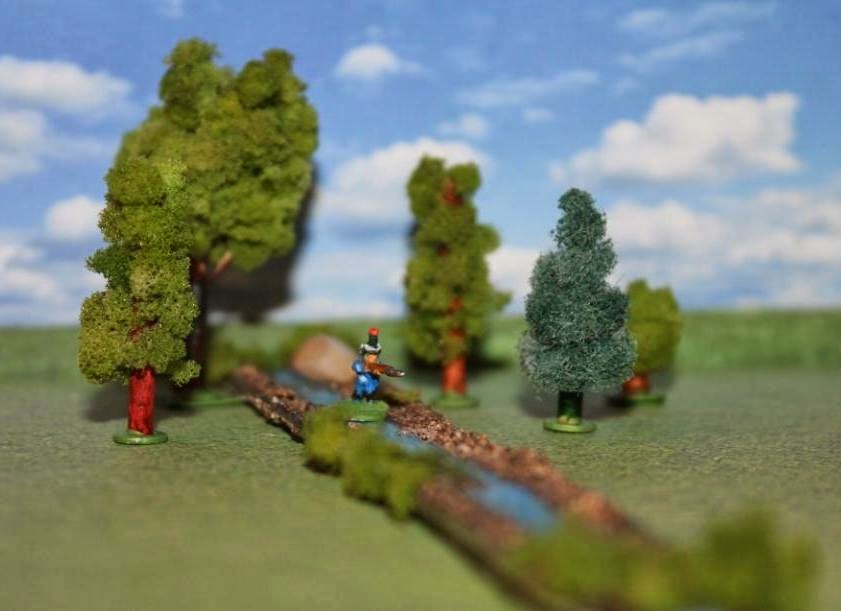 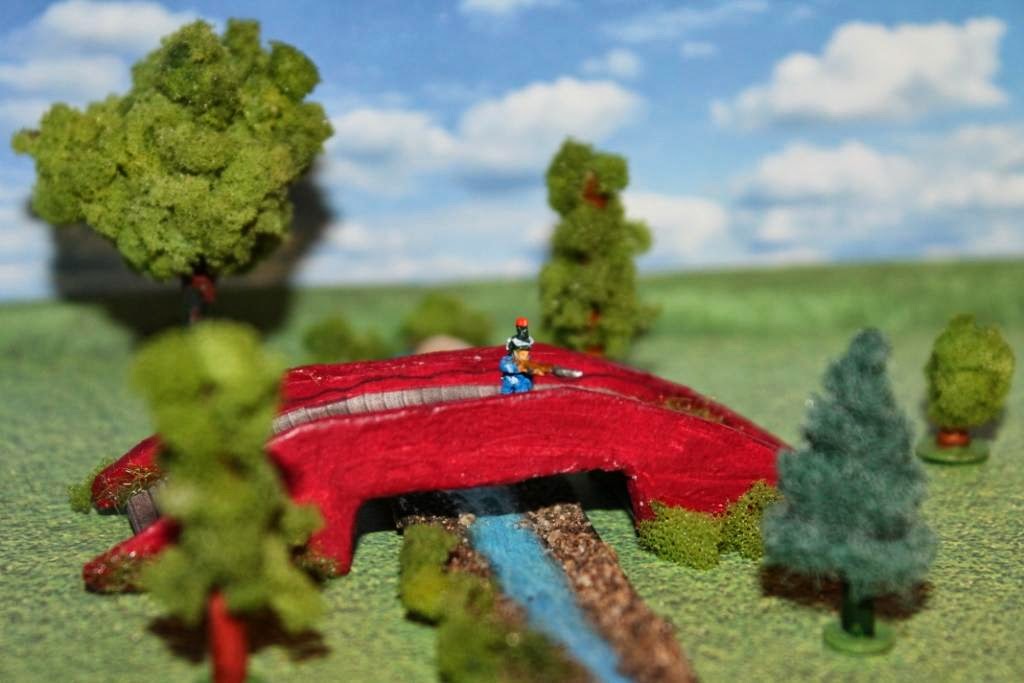 over the river with a pond, etc. 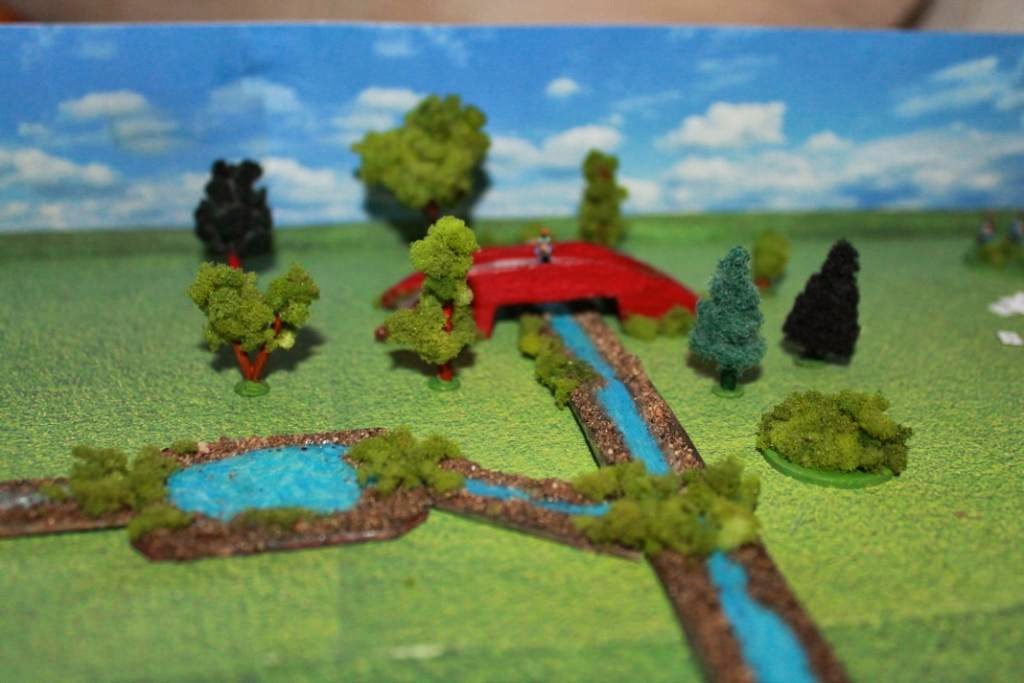 Here is a bit different view at the board. 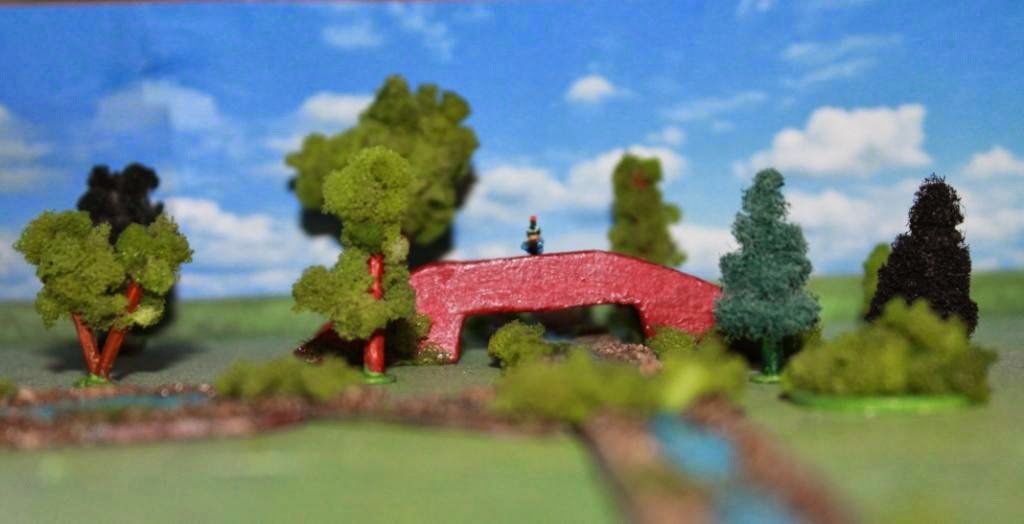 All terrain have a metal base, so it sticks to the game board. 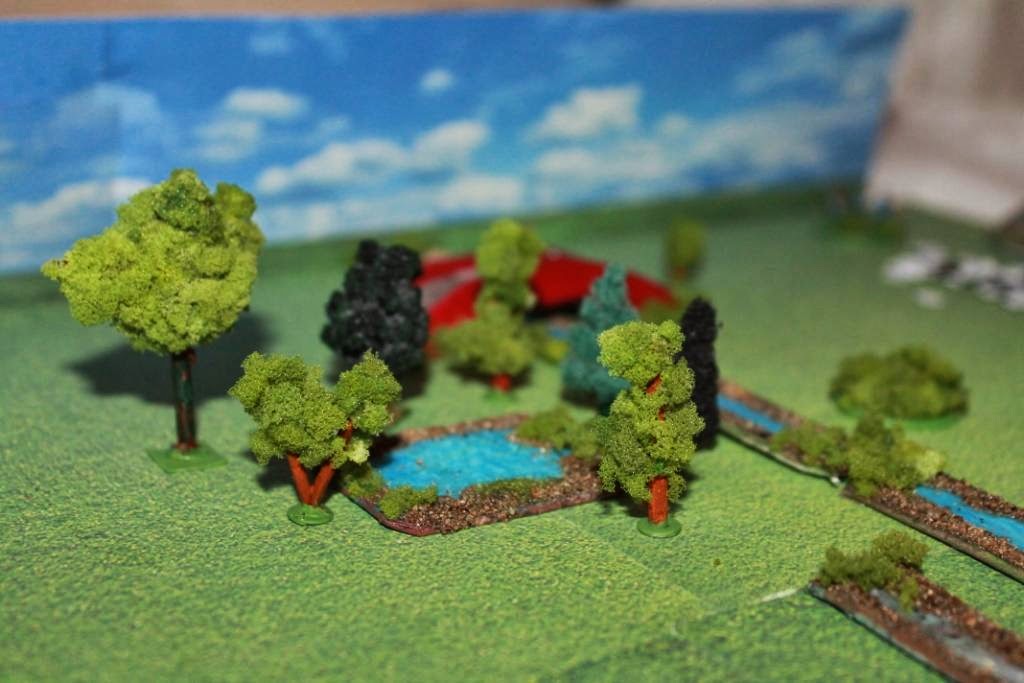 Also, all terrain features that can be walk over are magnetized under the flock, so they can hold soldier when necessary.﻿
﻿
﻿ 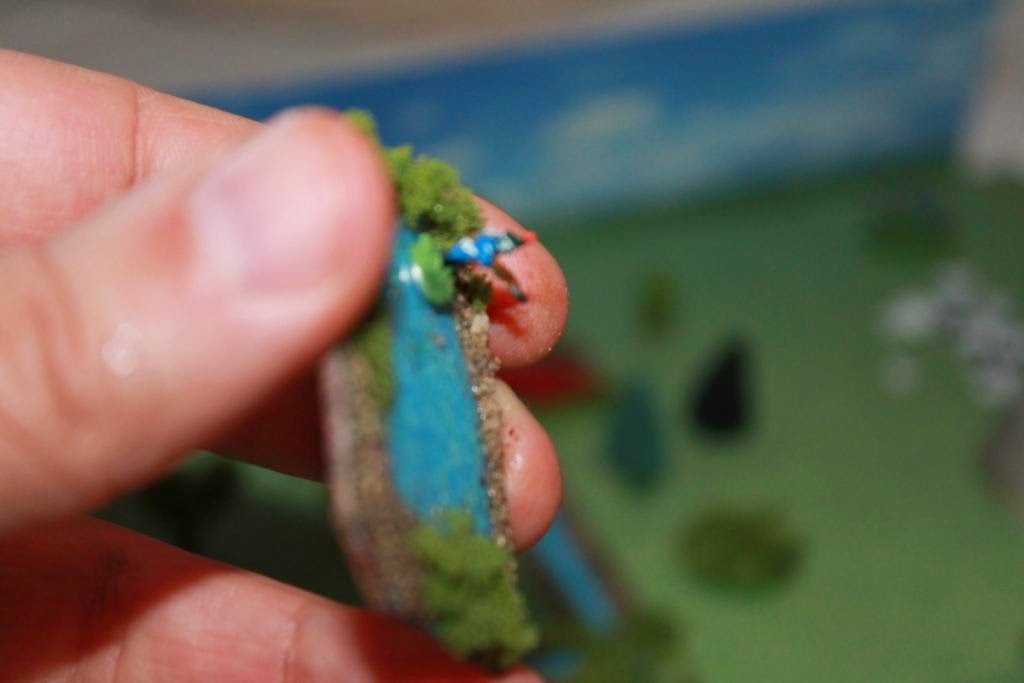 Hope you like it.
Posted by Aleksandar Šaranac at 11:24 PM 3 comments:

It has been a while since I last played any solo RPG, so I decided to treat myself with one.
Therefore, I turned my view again towards Microscope RPG, which, as I already told everyone a thousand times, I consider to be one of the soloist best friends in the world :)

This time, i wanted to play light, using only Rory Story Cubes as random event generator.
To further light things up, I decided not to play the scenes, which are always time consuming, but when a question poped up, I resolved it with two sets of two Rory Story Cubes.

The game follows history of the Ardgost family. I let the game flow, with no predefined world or history in mind, but at the end it looks like some alternative XVIII / XIX century Earth.

So here is the write up (the most important dice rolls are given in brackets):

I Start: Lighting of the family falme.
(One cell organism, Fingerprint) Father Ardgost sends his son Aron I away from home to start his own family. Why? (Bridge, Letter; Thought, Tree) Ancestral spirits told Ardgost that he needs to split his family if he wants his family tree to survive.
Aron I selects a place for his family home, following the prophecy that he should settle (Flower, Wake up clock; Falling star, Judge's hammer) on the place where he first sees Duram flower in spring. Aron I builds his first home: a tent from animal hides. He proclaims Duram flower to be his family ensign and puts it on his tent.
Aron I also plants the first seeds of Fast-growing tree, that he took with him when he left home. Soon, there is a forest of fast-growing trees around his tent. He takes his father name Ardgost to become a family name.

II Destruction of the forest.
Aron II discovered the way to use the juice of the Duram flower to prepare the fast-growing tree timber in such a way to be at the same time elastic, durable and easy to model.
(Enter, Butterfly catching) To speed up the process of preparation, Aron II brings a larva of the insect that feeds upon leavs of fast-growing tree. Trees die, leaving plenty of timber.
Aron II first builds a cottage from timber, but soon takes it down, after replacing it with the mud house and selling the timber. Properly prepared timber from fast-growing tree becomes more expensive then gold (Ordering, Elephant - meaning BIG). By selling it Aron II becomes a rich man.

III Time of expansion
Aron III replaces mud house with one build from stone. He also hires (Careful, Shield) private army, first in order to protect his home, but later (Terrible, Strength)  he uses it to expand his properties at the expanse of his neighbors.
Mihiz, Aron III's son in law, put fences around Ardgost family lands. The only entrance becomes well guarded gate. He also digs labyrinth of tunnels under the house, with escape exit leading far out of the family land.
(Basement, Rainbow) While digging, Mihiz discovered hidden treasure, gold left by old era civilization. On the place where he discovered the treasure, Mihiz decides to build a safe for family treasures.
What is the first thing Mihiz puts in this safe? (Terror, Axe; Machine, Dinosaurs) Mihiz makes it a storage place for the newly discovered terror: firearms and gun powder.

IV Time of modernization
Mihiz equips his guards with firearms.These firearms are built by Ardgost family, from prepared timber of fast-growing tree. Why Mihiz did not sold this firearms to the world? (Sad, Monkey; Close, Magnet). This kind of weapon is expensive, since material for it is rare. On the other hand, other manufacturers managed to copy the design by Mihiz and to produce cheaper firearms from more common materials, like iron.
Mihiz uses another new age wonder - barbered fence is now surrounding his land. To by it, Mihiz sells last of the fast-growing tree timber.
(Safe, Water creature) Underground waters burst into safe, flooding it and destroying gunpowder stored there. The gunpowder was already sold to customers, so Mihiz has to pay them back their expenses. To acquire that kind of money, Mihiz starts gambling, but is constantly loosing, and so he sinks even deeper.

V Time of negligence
Aron IV, son of Mihiz dedicate his life to pleasures, spending all that remained from family wealth. He even introduces the world of pleasures to his nephew Pelon. But the tragic accident in which Pelon's best friend dies trying to climb a rock while drunk, sets Pelon into the world of asceticism.
Aron IV dies from over-consuming alcohol, leaving no other hair but Pelon. When he died, he was in the company of his music and sports tutors, who were actually his drinking colegues.
The tutors start the claim that Aron IV left them his house, but Pelon wins the court proces against them and is proclaimed the only hair of Ardgost family.

VI End - family flame burns out.
To cover all expenses, Pelon is forced to sell all the land. Only house remains. In order not to be forced to sell it too, Pelon gives the house as the present to famous world traveler and scientist, who have just returned from a trip around the world, with the theory about origin of species. The house becomes home of the Natural History Museum.
To remember Ardgost family, curator of the museum builds a Duram flower garden in front of the house, and in the middle of it plants a single fast-growing tree.

The End.
Hope you enjoyed it.

Posted by Aleksandar Šaranac at 3:42 PM No comments:

I have just found out that a little less then a year ago a video blogger named Marcowargamer made a great video review of my Thermopylae solo game, the one I made for BGG Solitaire P'nP Contest 2011.

The link to the review is here.


The Thermopylae solo game files, if someone wants them, are located at the right edge of this blog, under My sets of rules tag.
Posted by Aleksandar Šaranac at 11:53 AM No comments:

If you have no idea how to read them, throw them...

My 3 year old kid got his hands on my Rory's story cubes and used them creatively....... for target practicing. 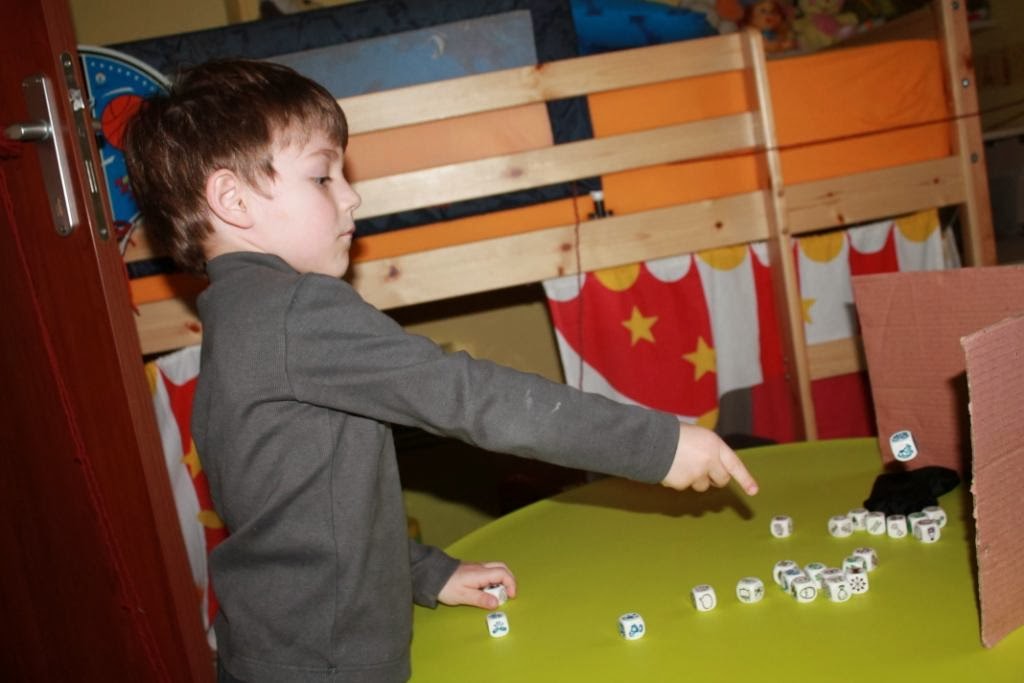 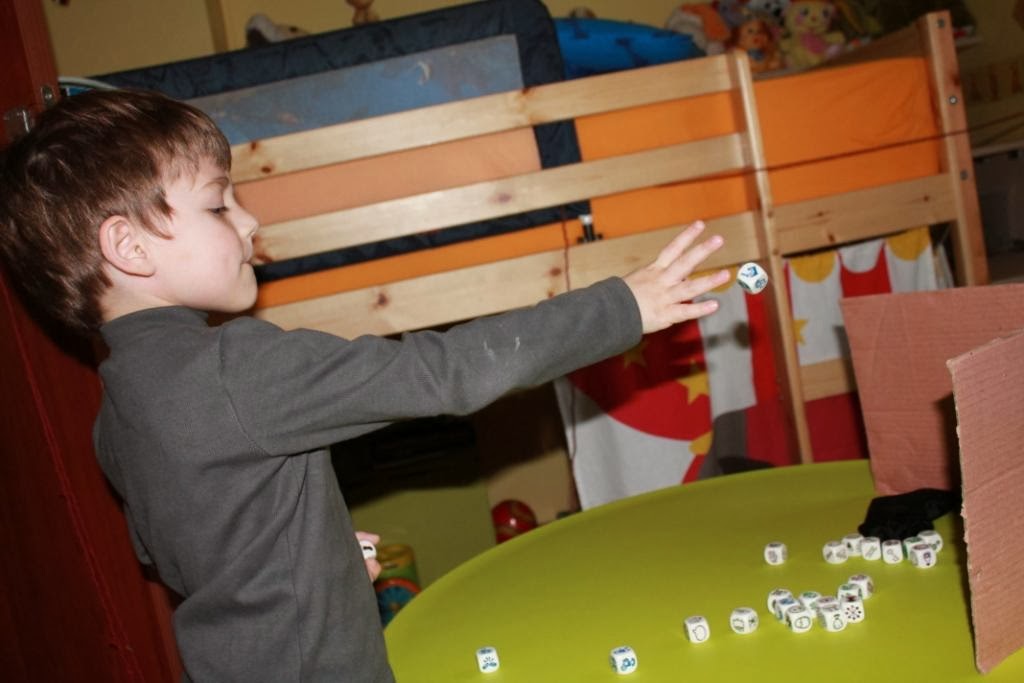 For me, it is a start... Once he gets familiar with the dice, I will tray to make him tell some story about the die he wants to throw, to get him into storytelling....﻿
Posted by Aleksandar Šaranac at 8:54 PM 2 comments: