All roads lead to Rome

Twenty years ago, senator Ricinus Alexandrinus left Rome, took his family and all his wealth and settled at the north fringe of the empire. He hoped that this move will keep his son Rattus far away from the decadency of the capitol.
But when old Ricinus died, young Rattus Alexandrinus quickly managed to spend all of his father’s hard earned money on easy life. Left without means to support himself, Rattus Alexandrinus decided to start gladiator school, seeing this as a quick way to fame and fortune, and maybe his ticket back to Rome.
First gladiator Rattus Alexandrinus bought was quick and decently trained, although not very strong thraex Amniocentesix the Gaul (Savvy 3, Strength 2, Speed 5). To test his new gladiator’s skills, Rattus organized for Amniocentesix friendly duel against known muscleman murmillo Amebius Monocellius (Savvy 3, Strength 4, Speed 2). 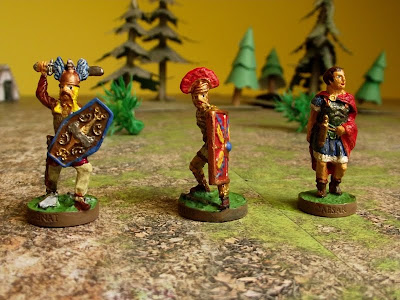 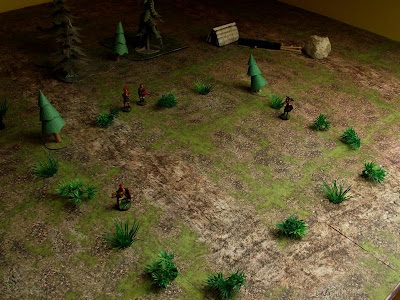 Gladiators enter the arena and approach each other. 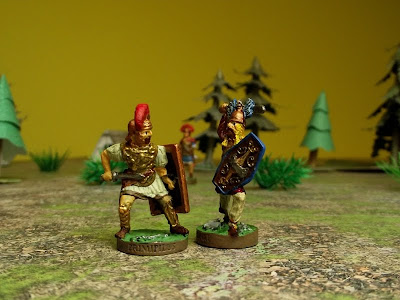 Thraex gets a chance to attack murmillo unshielded side, but misses. He attacks again, but this time he only hits opponents shield. Amebius is pushed out of the center of the arena.
Amniocentesix approaches his enemy and attacks again, this time head on. Finally, lady luck looked at the Gaul and he hits murmillo's sword arm.
Wounded gladiator drops shield and switches the sword into his offhand, but his right hand is heavily bleeding now. Also, he is now pushed close to the arena wall.
Gaul approaches and attacks, but he is too confident, and Amebius gets the chance to counterattack! But murmillo does it hastily, and runs pass the Thraex, who got the chance to attack and score a hit on Amebius belly. Murmillo falls to the ground. 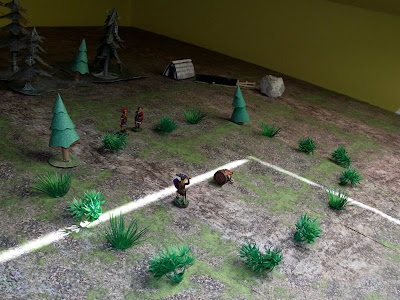 But Amebius is strong gladiator. He stands up, and, bleeding heavily, pushes everything he got into one final clash. But he is spent, and Gaul hits him again, this time taking all the strength from his left leg!
This is enough for Amebius, and he surrenders. 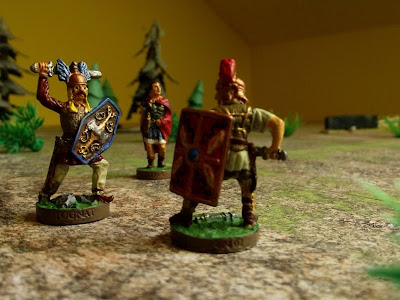 Since Amebius finds himself in the center of arena, with belly wound and no strength at all, satisfied audience grants him mercy.
Posted by Aleksandar Šaranac at 9:35 PM