Since my kid collected some weighted figurines from the supermarket chain, I tried to explain him how they can be used for gaming. 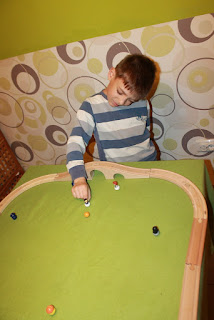 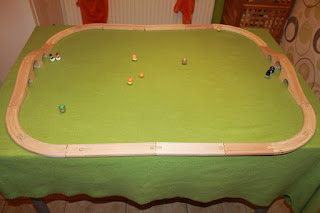 Playing field was made from old green blanket and some Ikea railroad tracks. Enough for the evening of fun.
Posted by Aleksandar Šaranac at 11:08 PM 1 comment:

Microscope is one of my favorite storytelling games.
And it's been a wile since I played with it, so it itched my fingers to try it again.
I also noticed that for Microscope linguistic randomizes do better job for me than the graphical ones (for action oriented RPGs it is other way around), so I decided to use Random Event Generator from  Game Master's Apprentice cards.

I wanted to do a steampunk history, so pallet said yes to steam machines and smooth-bore firearms, and no to magic.

History started with the rebirth of civilization, and ended with the period of great silence - a time when nothing happens for a longer period.

As usually, I have 3 persons involved in making history. There would be me, yellow player and green player. This time, I decided against creating personalities for dummy players.

First pass saw me adding an event in the end period - Eternal Emperor rules over the submitted masses.

Yellow player, inspired by "Awakened tool" created a period of steambots - steam powered machines with artificial intelligence in the service of men.

I was the one selecting first focus, so I opted for "What makes steambots tick?"

Within yellow player's period, I created an event first, explaining how scientist Isak invented micro-steam-chips, that were used to create first steambots.
Then, within this event I made dictated scene (all scenes in this game will be dictated) asking a question "what are the limitations of steambots?"
I explained that micro-steam chips produce heat that needs to be cooled by water. This water turns into steam that further makes micro-steam-chips run. For all this, steambots need water, which they suck from air moisture.
Therefore, intelligent steambots can exist only in wet climate zones. In the deserts and in the other dry lands, people still need to use human slaves.

Yellow player, inspired by "Divide Anger" made an event within his own period: Safety mechanism (similar to Asimov's First Law of Robotics) is implemented in steambots. If a steambot tries to hurt human, it will trigger his self-destroying mechanism.

Green player, inspired by "Divide Attention" reacted to that by explaining how steambots learned that if the humans get hurt by accident while they are performing other tasks, self-destroying mechanism will not trigger.

Finally, as a lance, I created a new period - Artificial Intelligence serving no one but itself.
Within that period I created an event where Jork returns from the deserted island and starts teaching steambots to the new philosophy of freedom - how machines are self-sufficient and have no obligation to serve humans.

Yellow player then selected a legacy: Silence of the Monument - Jork on the deserted island.
Inspired by  "Release source" he made an event where Jork dreamed his philosophy during dry period, which he spent immersed in island's only spring. Additional cooling of the running water made his chips run better, and he become enlighten.

To be continued.
Posted by Aleksandar Šaranac at 1:12 PM No comments:

One of the things I share with my 6 years old boy is reading children literature. So far, I am still reading the novel, and he listens.

Last night, we finished reading Neverending Story by Michael Ende. So this morning, my son decided to build Ivory Tower and surrounding labyrinth using the wooden bricks he found at his grandparents house.

I have to say that I am very proud with his achievement, as he did everything by himself. 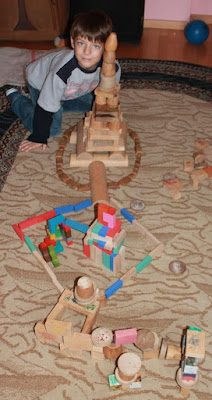 Posted by Aleksandar Šaranac at 9:11 PM No comments: