It's been more than a year since I downloaded free demo rules from Rattrap Productions LLC, but somehow I have forgotten about them. While cleaning my computer few days ago, I found them again, so I decided to give them a try.
Running through the different demo rules, I noticed that full set from one of them, called Gloire, has an introductory solo scenario, so I bought the PDF to test it. Story is modified a bit in order to be used with the miniatures I already have. 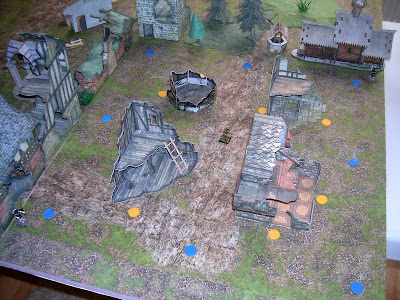 Grade 3 philosopher entered the ghost town. He was paid to meet the wizard somewhere between these ruins, and escort him to the specified meeting point.
Hero starts at the middle of the board, while 2 skeleton guards start at the opposite corners. Blue counters represent possible encounter markers (one of them is a wizard), while yellow ones represent possible meeting locations where wizard should be taken. 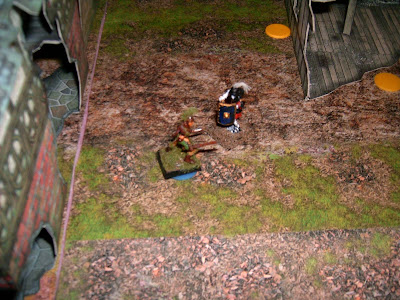 Philosopher started towards western marker, where he learned about the tunnel below north-eastern house. Moving south, our hero encountered a thief looking for treasures hidden between the ruins. Thief attacked, but our philosopher managed to wound him. Thief lost his nerves and escaped. 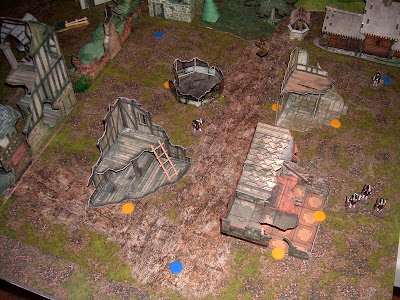 Philosopher checked several other markers but they only brought more guardsmen into the meeting location. 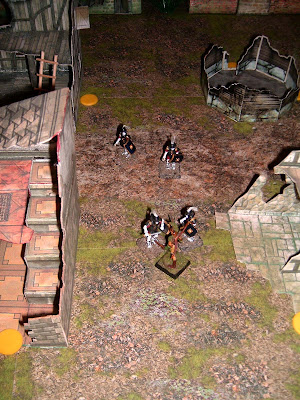 At the end, guards caught with the hero. The chase begun. 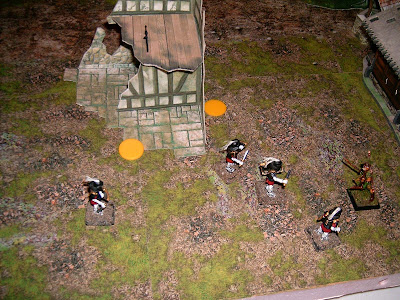 Philosopher was forced to move fighting, and guards wounded him several times. Most of the times hero was able to hold his nerves, but one wound was to much, and he started running. Fortunately, he was able to rally just 1" from table edge. 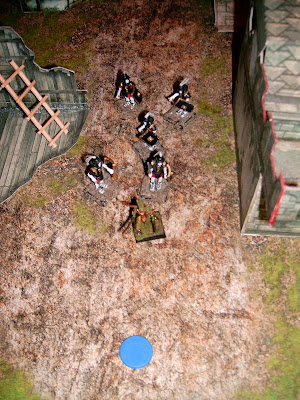 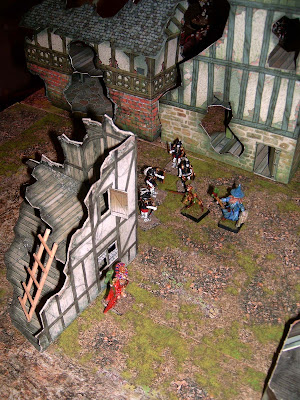 And finally, it is a wizard!
Enduring heavy fighting, philosopher escorted wizard to the meeting location.
Once they met with the mysterious stranger, he opened the secret tunnel, and the tree of them descended into underground, leaving the skeleton guardsmen chase party behind... 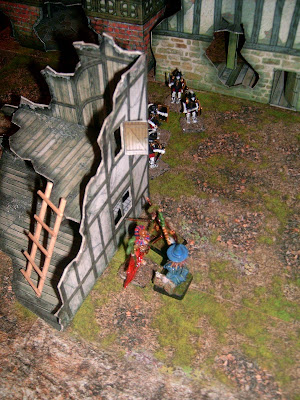 Playing was fun. Scenario is challenging and well balanced. Hero managed to stand against the horde of low grade opponents, but just barely, staying in defense and receiving one head, 3 torso, 1 arm and 3 leg wounds. I almost lost the game when hero failed guts test. If my goal would be to clear the board of opponents, I would stand no chance.
Posted by Aleksandar Šaranac at 9:40 PM No comments: