Almost a year ago I started a Mythic adventure called Crazy street preacher (Part 1 is here, part 2 here).
I stopped the game when my hero, Gerry, was sent on a road, since I was not quite sure how to roleplay a travel.
But recently I had an idea to combine Mythic with Microscope RPG and to look at the Gerry’s travel as the Microscope history.
As usually, I used 3 players rule by Risus Monkey. One player is conspiracy theory freak, one is with both feet on the ground, and the third is, of course, little old me.
AAR is written in chronological order.

As Gerry started his travel, the change of power happens within the cult. A high court judge takes lead of the cut instead of Buddhist monk. Judge informs police that Gerry stole a painting. Police inspector assigned with the case is a good cop known for his weakness for homeless people (UNE). Since Judge is not convinced that inspector can finish the job, he also engages a private army of TV priest who wants to become a cult member. The hunt for Gerry begins.
While all this happened, Gerry spent the day of travel, and decided to rest in wooded area by the road. He used last light to study painting, and managed to read a word

Ravine
hidden between the lines in the painting. Unfortunately, he was unable to find anything else since his concentration was broken when TV priest private army found his trail. Gerry moved deeper into the woods and went to sleep.
Next morning, Gerry woke up to find painting missing. While looking for it, he met good inspector, who found out that Judge and TV priest are cult members. In order to stop them, he returns painting to Gerry, and then sends priest’s private army into goose chase. Finally inspector sends story about Judge to his friend journalist.
Gerry reaches destination gallery without a problem, delivers the painting, and becomes initiated into cult member. He also receives invitation for next cult meeting.
After being dragged through newspapers, Judge lost trust of the cult and Buddhist monk becomes leader again. But cult breaks in two, since TV priest and his men join Judge and form a new secret society.
Good inspector was taken out of active duty and promoted into police PR.

Gerry was mostly in control, so CF falls to 6.

Open threads:
Find more about the cult.
Find the meaning of the word Ravine

For some time I am planing to play a campaign in the world that mix Star Wars and 5150 universe.
There would be Jedi knights, but on the fringe some Hishen, Zug-Zugs and who knows what else...

At the moment I am painting miniatures needed for the campaign.

Here is the squad of Hishen pirates (originally GW models) : 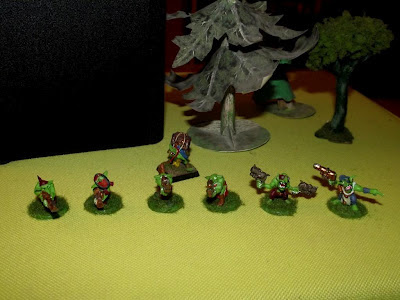 Squad consists of leader with personal assistant carrying his stuff, 3 pirates with guns and 2 support pirates with heavy weapons. Here is one of the supporters: 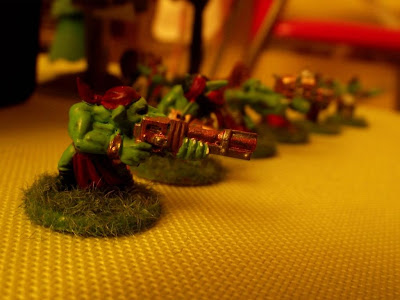