Rats in the Basement - Oolong the Scarlet Hero part 3.1.

Being a solo RPG player has its advantages... Among others is the possibility to try new tools of the trade. So, it is now time to playtest Perilous Interactions system by Rory Bracebuckle.

In PI, first thing you do is to determine a number of random Seeds, that will lead you through adventure. Using Rory's Story Cubes, I got following:
1. Hit Big
2. Bombard Rats
3. Cut Magnet
4. Puzzle Lighting
5. Old Key
6. Push Suspects
7. Big Present

Upon entering the Capital, the sheer size of the City overwhelmed Oolong. She was welcomed by Long Jing and (now his) porcelain servitor, so she had a place to stay, but she had no contacts, and no idea where to start looking for a Librarian.

Story probe: Long Jing opened hairdresser shop in the Capital. Is there someone among his customers who might know Librarian?
No. Something else - RSC: Egg. In the hairdressers workshop Oolong met a cook working in one of the city noble houses, who is looking for a hero.

Big question answered: HOW - Oolong can find librarian by working for the servants of the noble houses - unreliable.

A cook from a noble house of Lapsang Souchong admitted Oolong that he is afraid to go to the house cellar. All he needs is located in the first few rooms of the cellar, but there are many rooms in it, and when a cook is alone there, he can hear strange noises from the depths. What if his master ever sends him deeper for something? Cook knows that the noise is probably made by ordinary rats, but he wants Oolong to investigate.

Cellar has two levels, first of which has 9 rooms. 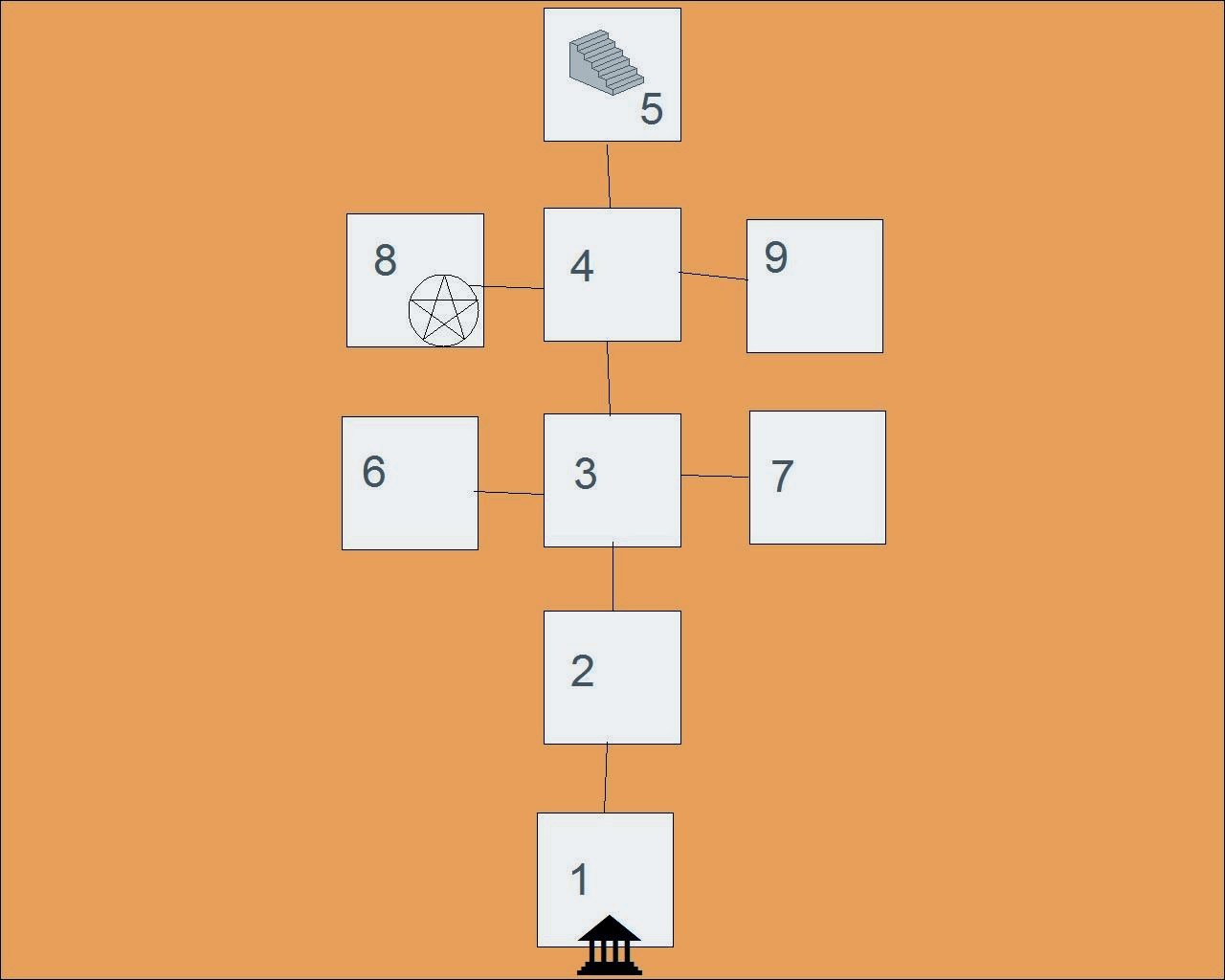 First two rooms were empty. In room 3 Oolong encountered more house servants. They were informed about her arrival. But none of them knew nothing about noises coming from room located deeper, or they were not willing to tell (failed charisma test). But than, Oolong saw someone signaling her from the side room (room 7). It was another servant, and he was ready to open his soul (this time charisma test was successful). (RSC: Eye + Heart) He tells that he recently met Lady Souchong here in the basement. The strange thing is that the lady was already dead for several years. The Lord was very much in love with her, so maybe... Servant dared not say anything more.
Rooms 4 and 6 were empty. Room 8 was locked. Is it some kind of prison - Yes and - it is protected by mighty magic wards. By peaking through the bars, Oolong noticed a beautiful lady standing inside. Woman seemed motionless, as in some kind of trance. Oolong recognised the creature immediately - it was a Leaping Vampire that used to be Lady Souchong.
Oolong just shrugged her shoulders and moved on. Vampire was not a threat for a cook, and she was here to find librarian, not to intervene in the strange love life of the rich....
Room 9 was empty except from some bottles of wine, so Oolong continued to room 5 and took a stairs to the lower level.
There, a narrow corridor took her to the opening of the big cave. Inside, she saw a huge winged demon (10 HD monster, RSC described it as Craw + Demon)! Oolong had enough. If Lord Souchong can have a vampire lover and a demon guardian, he must be a really powerful Blood Mage. And Oolong knew better than to mingle with plans of their kind. As she already noticed to herself, she did not come here to save the world.
So, she left the cellar (snatching on the way a bottle of good wine, no one will notice it anyway), and returned to the cook. She told him that he should stick to first few rooms, and that no one would send him deeper anyway. Finally, if he is so afraid, maybe he should think about changing employer...

And speaking about employers....
Story probe: Did master of the house recently hired new librarian?
No. Something else - RSC: Safe + Question mark. Lord Souchong recently moved all his books to some unknown safe place....

Big question answered: WHERE - Maybe Oolong can find librarian in the location where Lord Souchong moved his books - unreliable.

Posted by Aleksandar Šaranac at 1:06 PM