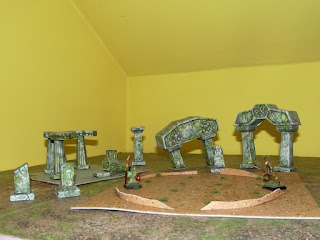 For the first mach, I connected Silver Elf against Black Moon Goblin, both level 11 fighters.
In short, both gladiators exchanged some blows, but then Gobo over calculated, passed by Elf, got wounded and knocked down on his face. Elf attacked from the rear and cut Gobo to peaces.
If anyone is interested, some earlier gladiator action can be found here.
Posted by Aleksandar Šaranac at 9:02 PM