As Roman army advanced between two hills, Gallic army was ready to meet them in battle. 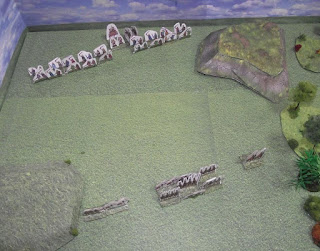 I fielded Gauls infantry (9 warbands) in a single line, with general in chariots and auxiliary horse as separate body at the back.
Romans were fielded as 2 units deep 3 units wide body at the center (Principes and one Hestati unit in the first line, 2x Triari including general and one Hestati in the second). Single cavalry unit on right wing, auxiliary infantry and skirmishers on the left. 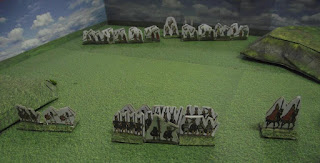 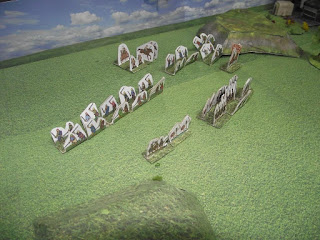 Gauls destroyed Roman left wing but were unable to turn in time to make the difference. Romans used this to break through center, killing Gallic chief and taking enemy army to break point.
Victory for Romans. 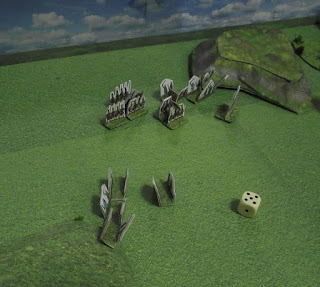 Roman strategy worked great. In the center, once the front units reached Gallic line, result of the first melee usually made both units disordered. Romans then used line relief to put fresh forces into fight and that was enough to destroy Gallic warbands, who were usually unable to use benefits of counter-charge due to the contact with other unit, and even when they could, they would run into front of the ordered phalanx where spears negated shock effect.

For the next game, I would have to think about good  strategy for Gauls in order for them to be able to break well organized Roman center.

I have to say that I really like ABC rules. Games are quick (last from 30 min to one hour), fun and straightforward.  These are the rules you can always find time for, no matter how busy your schedule is.
Posted by Aleksandar Šaranac at 12:15 PM