ALONe is a free solo RPG product by Larcenous Designs LLC, currently in its BETA test phase. Files for the game can be found here. ALONe uses cards from the Game Master's Apprentice deck, but you do not need to buy the cards - the black and white version of them is included with BETA test files of ALONe. I have a basic deck in physical form, so I used these cards to play.

For me, ALONe has some similarities with FATE RPG - descriptors from ALONe have strong resemblance to FATE aspects, so when I started playing had to resist a temptation to turn it into FATE game. At the end, I added different bits to the pool, found my sweet spot mixing various influences into game that suited my playing stile, and it all resulted with a very satisfying solo experience.

I wanted to play steampunk detective, in the line of agents from Ministry of Peculiar Occurrences books.
So, I started turning cards. 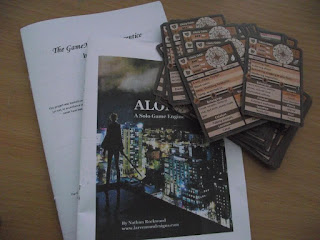 Family: crown/sword/shield
Balthazar Lance was a son of politically active nobleman Virgil Lance. His family lived on a estate mansion, where young boy felt protected from the dangers of the outside world. As he was seen to be a hair to his father's political position, he was pressed from early age to learn arts, philosophy, history and law.
Descriptor: Specialized in social sciences.
As I did not want to spend Fragments during character creation, I made descriptors in such a way that they represent both one positive and one negative aspect. In this case, descriptor will grant +1 when Balthazar uses his social sciences knowledge, and -1 when solution depends on natural or technical sciences.

Childhood: skull/moon/sword
One day, Balthazar's father dissapeared without a trace. He went to the office as usual but he never returned. Further more, it was as his existence was erased - clerks in his office claimed that such a man newer worked there; banks had no accounts to the name Virgil Lance, etc. Family suddenly found itself with limited funds. They had to sell mansion and move into rented apartment in the city. They did not fell so low to consider themselves poor, but all family members had to work to fill the budget.
Balthazar put his knowledge to the good use and become a tutor to children of the middle class.
Random event: Follow Ghostly Kid
One of Balthazar's best students was a terminally ill kid named James Taylor. When James eventually passed away, Balthazar cried himself to sleep. But that very night, James come to his dreams just to ask a question about philosophy lecture from the day before. The lectures continued regularly, as James visited Balthazar's dreams at least once a week.
Descriptor: Connected to the other side.
(+1 to gain knowledge from other side, -1 to resist attacks coming form the world of death)

Youth: wand/hearth/sun
One evening, while he was returning home from the lecture, Balthazar's way was crossed by the strange man. Boy needed some time to recognize strange figure for who he really is - his long lost father, Virgil. Virgil Lance was now influential member of RSSPE - Royal Secret Service department created to battle Paranormal Enemies of the country. And he wanted his sun to join the organization. Balthazar was happy to accept, and so he spent next couple of years in special wing of military school, learning how to help the crown defeat enemies of the state.
Random event: Convince Profitable Monument
Thanks to history knowledge gained in early life, during one of the studying trips to Archives,  Balthazar was able to recognize (possession table check) Ancient Artifact: cultural relic - death mask of faro Tutankhamen. He presented this to his father, and he decided to give the mask to National museum, to be publicly displayed. RSSPE collected royalties from every visitor of the mask room, and that significantly improved financial status of the Service. As personal reward, Balthazar was allowed access to the state of the art equipment.
Descriptor: Better equipped than average agent.
(+1 to have what he needs in his possession, -1 relations with other agents due to their envy)

Coming of age: wand/hearth/sword
Random event: Replace Bewildering Tension
Catalyst: Villain Vs. Villain Fight. Vice: Lust Vs. Greed.
On one of his first assignments as agent, Balthazar followed thugs working for crime lord Ser Arthur Weaver, known smuggler of arcane objects. When thugs accidentally summoned succubus from one of the relics, Balthazar helped them banish her. This earned him a respect from Ser Weaver, who from that moment on tried to stay out of Balthazar's way, and was even ready to help young agent in the case of need.
But succubus Igraine Zooma did not forget the affair, and she is constantly plotting Balthazar's downfall.
Descriptor: Selected lesser evil.
(+1 when confronted by human criminals; -1 against demons)

To be continued.
Posted by Aleksandar Šaranac at 10:17 PM