Black Ops - Get that data card!

So, Orks came from the north. In the first turn they caught guards unaware. Close quarter combat (CQC) specialists sneaked behind one the unaware guards using the forest to the east, and killed him silently.
Ork leader approached the target building in order to get the data card. 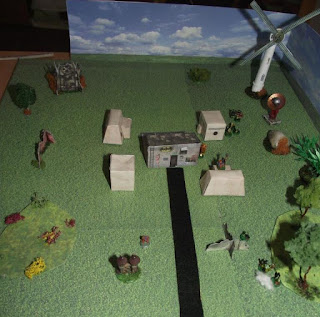 Hell broke loose at the beginning of the second turn. Remaining guards spotted intruders and started shouting, which was enough for Space Marine leader (Ace) to wake up and rise an alarm.
Hearing the alarm, Space Marines reinforcement force arrived through the east road. They quickly cleared east part of the table from any Greenskins they could find.
But Orks were doing good at the west. They prepared an ambush for Space Marine commander, and as soon as he emerged from the building he was taken down by the rain of bullets. 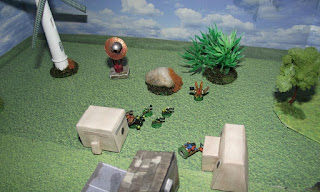 Ork leader found the data he needed and ordered retreat. 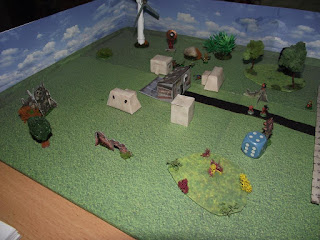 Turn 3 found remaining Orks trying to move out to their table edge, and Space Marines trying to close for a kill. At the end, Ork leader, Heavy support and one grunt managed to escape, while remaining grunts got killed in firefight.
Orks took heavy casualties but they were still victorious, as Ork Ace managed to return home with the data.

At the end, I really liked the game. Through the first turn I was afraid that the game will be boring and that I will easily accomplish my mission,  but as the guards become aware of my troops everything become really interesting. At the end, I was victorious, but it was close game, and there was possibility for tide to turn at the end.
What is the most important thing, enemy AI worked great, enemies responded reasonably to my actions, making Black Ops perfect solo experience.

What I missed is some kind of QRC with all tables at one location, but this is something to be more blamed on Osprey required book format, than on the author.
Still, searching for the right table through the book makes play slower, and making private QRS sheet for the next game is something I will have to do.
UPDATE - I was informed that there is existing QRS on Osprey site - here is the link.

Finally, since this is my last post this year, let me wish all of you all the best in 2016.
See you next year.

Posted by Aleksandar Šaranac at 2:42 PM