One of my favorite skirmish games - Song of Blades and Heroes is now available in two flavors - as normal and advanced game.
Advanced game was funded through kickstarter, and, among other things, it features lots of new traits, magic system developed to higher detail, and a very neat reaction system that allows your models to step in with the quick action during the opponent turn. As kickstarter backer, I received the playtest version of the game few days ago, so I decided to do a little solo trial.
I played a small game, where two 100 points warbands (troll, orc archer and giant rat against human leader, human archer and a dwarf) were pitched in a limited space of a dungeon room.
As usually, I am on a business trip and I have limited resources, so for this test I used grid instead of sticks, counting one square as short, two as medium and 3 as long distance. Figures are 10mm scale.

The beginning of the game favored dungeon monsters, as orc archer made a gruesome kill on human shooter. 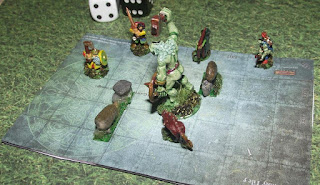 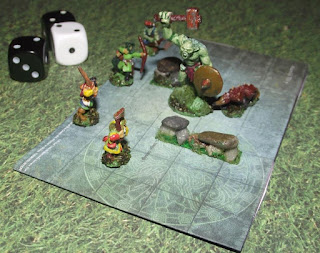 But high Quality of attackers showed itself here, they got over the gruesome kill, ganged on troll and sent him out of action.
Then orc archer missed his shot, rat recoiled from a dwarf and looters were able to gang on remaining orc again. Orc went prone, and then rolled turn-over, so heroes used lethal attack to finish the game (animals automatically escape once last non-animal model is killed). 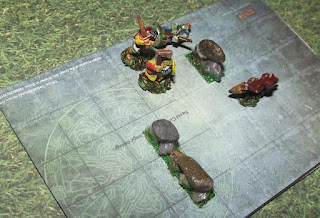 The game was fun, and the new traits really give color to characters.

Of course, when playing, my main concern was how will the new rules influence possibility for solo games.
To my surprise, it seems that advanced version will be easier to transfer into solo game than the original one. The goal for the future is to define the way NPCs will use reaction based on their role  in the warband (shooter will probably move away from the melee, etc) and this will make them more automated, more realistic, and therefore a bigger challenge for the player.
I am looking forward to delving deeper into this rules.
Posted by Aleksandar Šaranac at 9:30 PM