Last two weeks I was traveling through Europe on a long excursion with my family. We used almost every transportation possible - plains, trains modern and old fashioned, cars.... We met some rarely seen family members and old friends, and we visited some great museums and parks (mostly the ones appropriate for small kids).

During the trip I used downtime to immerse my older kid, who is now 5 years old, deeper into gaming. A nice RPG called Hero Kids was a great help in the process. As usually, I used magnetized board and 10mm figures mounted on metal washers to secure stability of the setting while on the move. 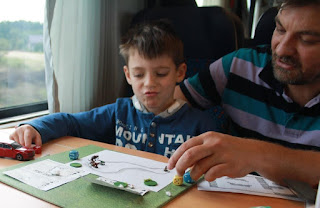 Here we are playing introductory adventure from Hero Kids in Euro City train.
My son just loved the game.

After returning home, I found two packages waiting for me.
Smaller one was from Sophia Brandt, owner of the Die Heart blog. Recently, she made a giveaway on the blog, and I was a lucky winner of printed set of Game Master's Apprentice cards.
GMA is a great tool for solo roleplaying, and I hope to use it very soon in one of my games - maybe even as part as my ongoing Fate Diaspora and 5th edition D&D dungeon crawl campaigns. 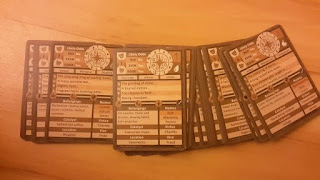 Bigger package was fulfilled kickstarter reward - copy of the new board game called Space Cadets: Away Mission.
I could not resist the urge to play this game immediately, and I am very satisfied with the first impressions. The game keeps to its promise of reviving feeling from the golden age of SF, really is easy to learn but difficult to master, and the way the success dice are distributed makes it a novel experience.
I am looking forward to playing next mission. 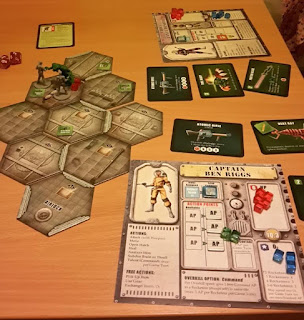 All in all, satisfying two weeks in every aspect.
Posted by Aleksandar Šaranac at 10:19 PM