It is finally time to continue the story of the bard Oldbook.

After escorting his priest companion back to his monastery, bard returned underground. he wanted to explore what lies west of the Flumph settlement (11 on the first map). 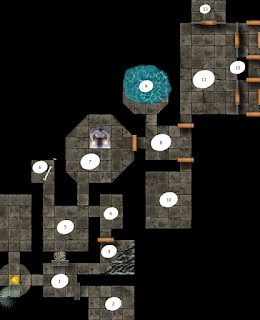 Oldbook started from the northern door. 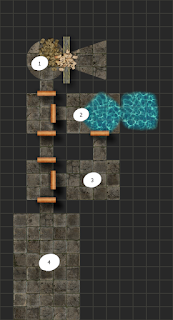 1. Empty circular room. There is a portcullis to the west, but it can not be opened due to the cave in. Oldbook could still see through rocks and bars, and he noticed some kind of hospital on the other side, but there was no way to reach it.
2. Another empty room. This one was partially flooded, and the door to the south was used as the dam to let limited amounts of water into next room. It seems that it was work of Flumph. Water was coming from the west. Oldbook though that if he could only breathe under water he could reach other parts of the dungeon through there, but at this moment it was out of his league.
3. One more Schreaker farm. Water was slowly coming from the north to feed the fungi. No additional exits.
4. Huge room, but with no other exits than the one Oldbook entered through. Two devils (Lemures) summoned by who knows what foul magic were calling this room their home. Lemures are not a hard hitters, and their defense is week, but their high hit points  presented a bit of a problem. Fight was longer than expected, and Oldbook used almost all his resources to win. But once the fight was over, he felt stronger then earlier, for he was finally a level two bard.

With his resources depleted, our hero returned to the surface. But as son as he stepped out of the dungeon, he was surrounded by the Deepcold city guards.

While he was escorted out of the city (and it was not gentle and pleasant experience), he was thinking if this was coincidence, or if some priests from the monastery talked... But he will have to investigate it once he will be able to return to Deepcold, and this will not be any time soon.

Oldbook was thrown out of the city with the boot in the back. When he was finally able to stand up, he noticed that a festivity is being held just outside the city walls. And where is the festivity, there is certainly a bards contest (for the contest I am using Archery contests - excellent - and free - add on by EN World)

So Oldbook entered a contest, throwing in 1gp deposit. Unfortunately, the memories of the guards throwing him out of the city must have been overwhelming, and against all odds he failed to pass qualification rounds, scoring two out of 3 required points with judges). Well, another gold peace easily lost.

With no better idea what to do, Oldbook decided to follow advice received from the Flumph, and he headed for the mountains.

To be continued.
Posted by Aleksandar Šaranac at 3:15 PM