Once upon the time there was a dungeon....

Following the post from Tabletop Diversions blog I decided to try How to Host a Dungeon solo world building game by Planet thirteen.

Here is the result of my first try: 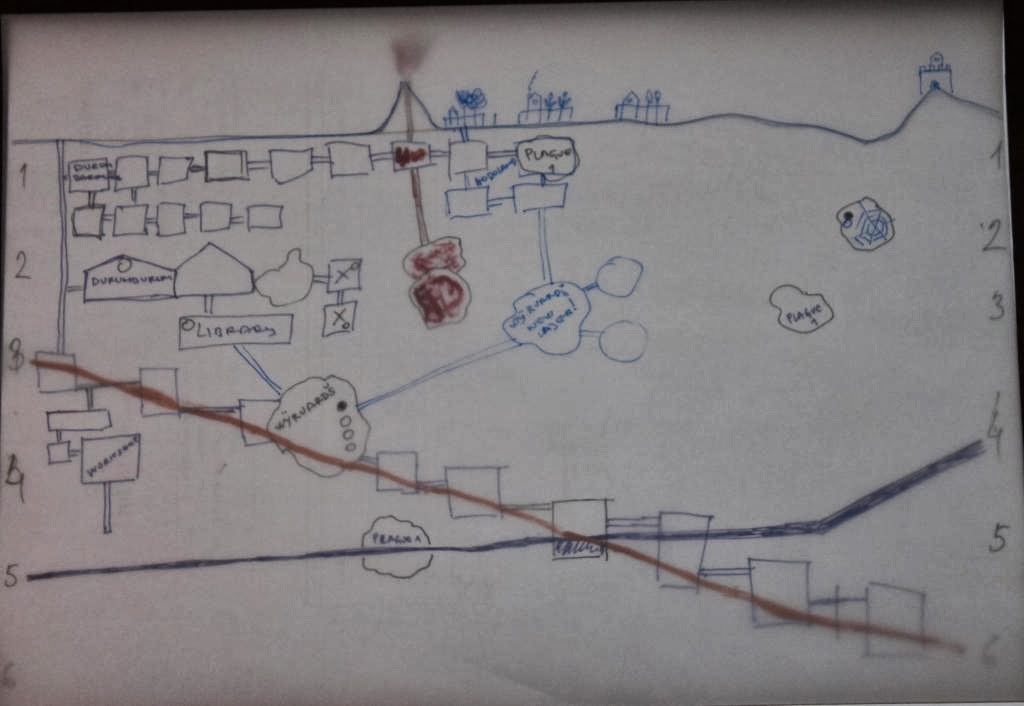 Once upon the time there was an underground. Underground river crossed its way with the golden vein, and ancient wyrm Wyrvardas slept on a pile of gold in natural cave.
Then, the Durum dwarves came to mine the gold. They left some gold in a cave in order not to wake the worm. The dwarven civilization lasted until all gold was mined, then the dwarves moved on, leaving empty city and some tombs behind.
A volcano exploded waking the worm who started digging through the underground.
At the same time surface kingdom was formed. But soon, surface people met some hobgoblin miners and constant war stopped both groups from developing further.
Wyrvardas got rich collecting treasures left after dwarves, and soon it become Alfa Villain.
Wyrm ended hostilities between hobgoblins and humans by eating first one and then second group. Soon it become so big and powerful that the whole underground belonged to him, and no one could challenge him, so the game ended....
Some parts of underground were left unexplored, like a natural cave that was lair to the giant spider...

As a conclusion, I would give How to host a dungeon a 3.5 stars mark.
Game can be interested, and there is enough replayability that no two games would be the same. But in the end I had constructed dungeon, but not a real story behind it...
As a storyteller type of person, I am still inclining more in favor of solo game of Microscope with good idea generator than this. I do not think I will play this game again any time soon.
Posted by Aleksandar Šaranac at 10:25 PM